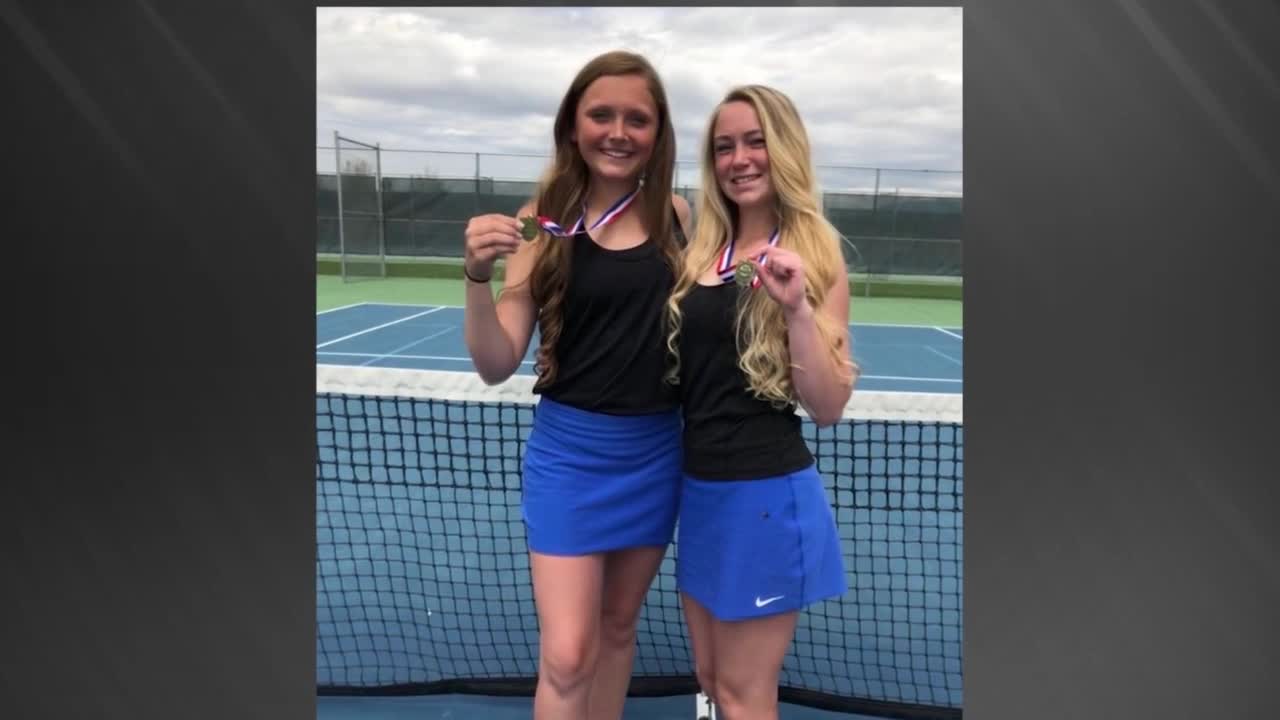 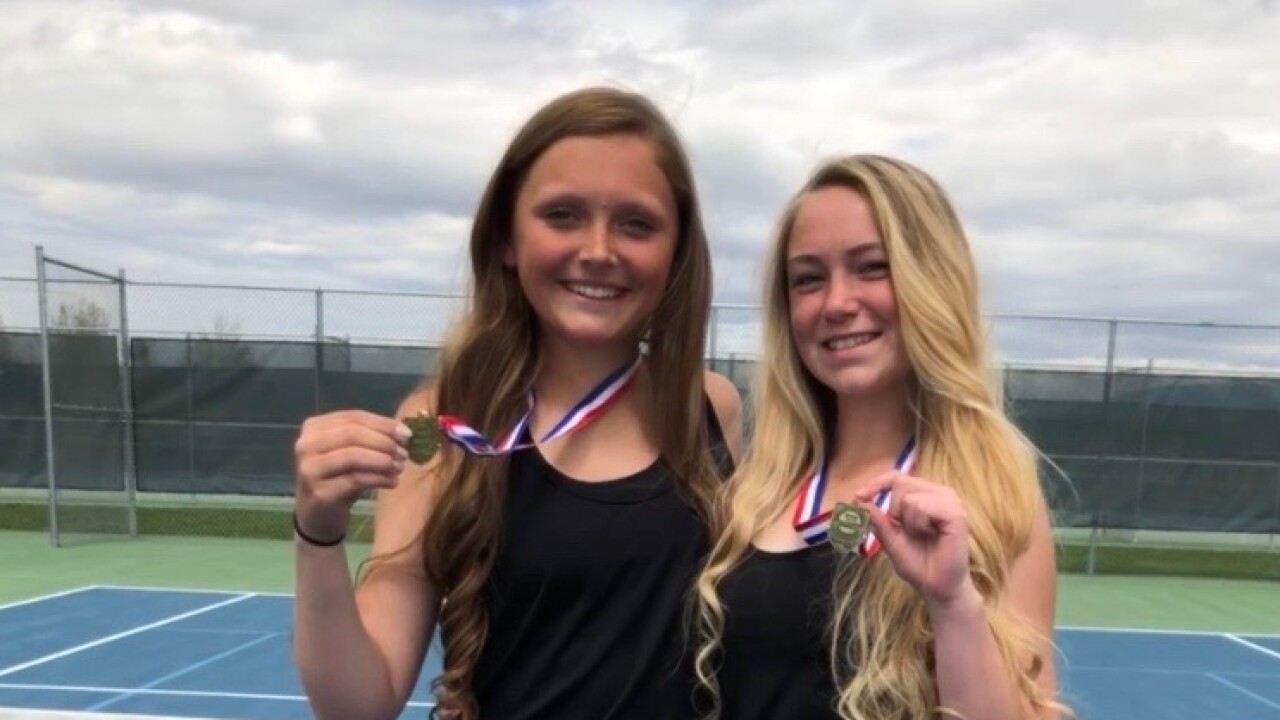 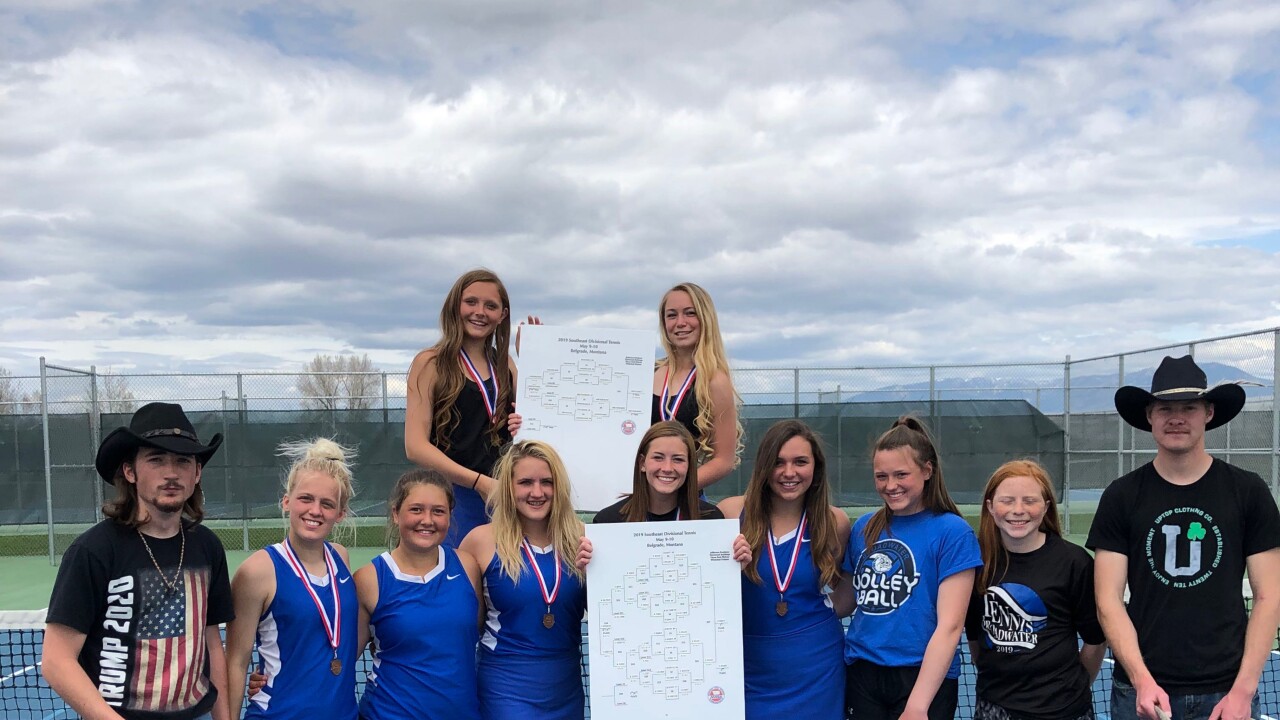 TOWNSEND — One might say it seemed improbable Taylor Noyes and Leia Schritz would find success on the tennis courts. After all, the first time they picked up rackets was, according to them, less than stellar.

“Balls over the fence,” Noyes laughed.

“Not being able to hit it over the net. Right into these poor peoples’ back yard. Everywhere,” Schritz echoed, pointing to the home due north of the Townsend tennis courts. “I think we hit a couple cars going by the street."

“The lack of hand-eye coordination was outstanding,” added Noyes.

“Throwing the racket instead of hitting the ball. That happened,” chuckled Schritz.

Whether it was by miracle or motivation — all signs point to the latter — the duo shook off those first experiences and quickly found a love for the
sport. More so, they almost immediately found success.

“We started playing together freshman year, junior varsity. We won the Great Falls tournament, which was a ton of fun,” recalled Noyes. “We were so excited, and then we continued to play together for the next three years, well, two years, I guess.”

This was supposed to be Year 4, but the novel coronavirus served a devastating stroke.

After being forced to cancel its state basketball tournaments in progress on March 13, the Montana High School Association then suspended spring sports until further notice, then added a hard deadline of May 4 for schools to return to an in-person structure without restrictions. When Montana Governor Steve Bullock announced schools wouldn’t be allowed to return to that setting until May 7, spring activities were officially canceled.

“I know we were both hanging on to the hope. When they came out with the May 4 deadline, we were still hopeful. But when that (got canceled) it was pretty disappointing,” said Noyes. “I was really upset knowing that we had big goals for this year."

Added Schritz: “My coach (John O’Dell) called me and told us that he wasn’t going to let it happen, he was going to make sure we got to play tennis no matter what, and to keep going to the courts and practicing because it was going to open up. I was like, ‘Yes, totally. That’s happening. I know it, I feel it.’ It didn’t go that way at all.”

Cancellations have been especially challenging on seniors, like Noyes and Schritz, who quickly saw multiple events from their final weeks — sports, prom, graduation and more — taken away.

Townsend’s No. 1 doubles team was especially devastated after learning they were the odds-on favorite to capture the Class B/C championship, while also pursuing the program’s first team title since 2017.

“Last year we placed sixth, and every team that placed ahead of us graduated at least one person. The bracket was wide open and we wanted it,” said Noyes.

“Really bad. Really, really bad,” echoed Schritz. “We had our singles No. 1, Megan Saltzman, and I know she loves tennis more than anything. She will go to classes in Helena all the time, even the offseason, she’s just ready to go. I can tell that was really hard on her, too.”

“Becca Larson was our other senior, and she didn’t know whether she was going to go doubles or singles this year, but she was going to be strong wherever she got put,” said Noyes. “Everyone was putting in the work in the offseason, so we were ready for this year, especially the seniors. We’ve watched several classes before us make it to the state tournament and compete really highly, so we wanted our picture on the fence, too.”

Two large banners hang on the fence in the corner of Townsend’s tennis courts, representing the program’s four state championships — three straight from 2007-09 and the title in 2017. The Bulldogs were certainly in the running for a state trophy this spring, with the ultimate goal obvious — adding a third banner to the fence.

While that’s a tough pill to swallow, for Noyes and Schritz it’s the lost opportunity to play a fourth and final year together that is most disappointing. Though they were friends long before doubling up for tennis, they were “never super close,” they admitted. The past four years changed that.

“I now know I have a life-long best friend,” said Noyes. “She’s definitely the more consistent one of the two. She can get any shot at the baseline, whether I think she’s going to or not, she always has my back on the court, for sure. I like to play the net, so I know if I miss a shot, she’s got it in the back. She has a killer serve. It’s just been a ton of fun to play with her.”

“Taylor also has a phenomenal serve that terrifies everybody that steps up to receive it. Animal at the net. She gets everything. You know it’s bad news when Taylor goes up to the net, they’re not getting past her,” Schritz said. “She has long arms, so she can reach really far and get things I never thought anyone could. I can trust her a lot to have my back. When I can’t get there, I can call out her name and she knows exactly what to do.”

Both players were quick to credit their coaches, O’Dell and Amy White, for everything from the mental focus to the technical aspects that made them state contenders. They laughed and joked about the bus rides, overnight trips with host families and even the squirt gun fights with other coaches at meets, something that, not surprisingly, involved O’Dell.

While the memories will last a lifetime, the pain from the canceled season will eventually fade, though finding closure is especially difficult this week — the State B/C meet was scheduled to begin Thursday in Missoula.

“Don’t wait until your senior year. That’s my advice,” Noyes said. “I don’t think that we underachieved our goals, but I think if we had set them a little bit higher, we could have gone that much higher at state last year. It’s a terrifying experience at the state tournament. But just don’t wait. Set your goals now, achieve them and then set new goals.”

“Don’t underestimate yourself. Don’t give yourself less credit than you deserve. Always come out, anytime you have an itch to play, go for it, work on it,” Schritz said. “Practicing over and over is really the only way to get better. It’s really easy to get frustrated in tennis, but overcoming that is one of the most important things to becoming a better player.”

In other words, don’t let Day 1 disappointments discourage you.