'They did it for Cayl': Manhattan Tigers win Class B state championship 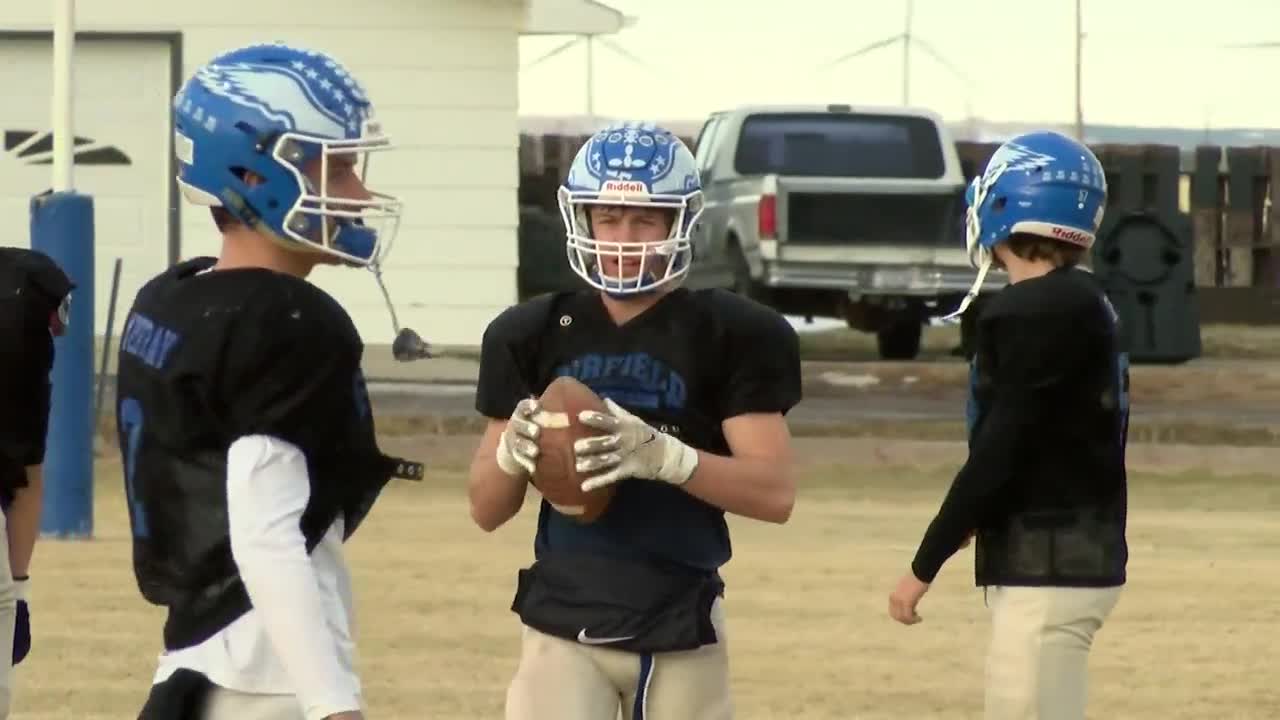 FAIRFIELD — On Saturday afternoon, the Manhattan Tigers won the 2020 Class B football state championship. They did it for themselves and they did it for Cayl Deboer.

“This is for Cayl, every Tiger that has put blood, sweat and tears into this program and also it’s for our community," Manhattan head coach Chris Grabowska said after winning the first title in program history. "We're excited to bring this one home from Manhattan too,”

However, there’s more to these two teams than who won or lost the championship. Despite being enemies on the field on Saturday, the sportsmanship between the programs went to a higher level more than a month ago.

“They’re a class-act program and they set a great example for others to follow," Grabowska said. "Honestly, we've been trying to model our program after them for years now. I have a lot of respect for them and that was a great gesture on their part.”

The Tigers adopted the motto, “Do it for Cayl”, after one of their stud defensive lineman, senior Cayl Deboer, was seriously injured in their game on Oct. 16 against Townsend.

Deboer went in to tackle the Townsend ball carrier whose knee went right into Deboer's stomach. It ruptured his intestines, bruised his pancreas and aorta.

“It was like the wind got knocked out of me but like times 10," said Deboer. "I definitely knew something was wrong as soon as I got hit.”

He was transferred from a hospital in Townsend to Benefis in Great Falls for an emergency surgery. It was discovered that his intestine was 50 percent torn.

“I had two drains coming out my side and a wound vac for the bottom wound on my stomach,” Deboer said.

During his hospital stay Deboer’s teammates were unable to make the trek from Manhattan to visit their injured comrade. However, he did have a very special group of people go see him. The Fairfield Eagles stopped by to give Deboer their support.

“I was kind of blown away by it, to be honest with you," said Deboer. "I didn’t think that any team would go that far to be that nice.”

“The special thing about Montana is that every kid for every school is part of a big football family, and Cayl the young man from Manhattan who got injured, we just felt obligated to go up there," said Fairfield head coach Greg Misner. "We know how hard all our kids work from every school. What really impressed me the most was the day after coach (Charlie) Brown and I went up there, our seniors went up there and visited him and we didn't ask them to, they went on their own accord and that was a real prideful thing for us. It was really neat to see.”

"It just shows our character and it just shows we support everyone," said Fairfield senior running back Malaki Hvamstad. "We would do it for any other team in the matter, win or lose to that team.”

Deboer returned to the sideline the last few weeks to cheer his team on as it played for him to make a championship run.

“It’s great to have him back, he’s really inspirational to me, honestly," said Ellison. "Just to see him around here smiling and enjoying himself even after all he’s had to overcome, it’s awesome to see. It lifts me up and makes me feel grateful for the opportunity that I do have.”

“We wish he was playing, but it’s awesome just having him here," said Manhattan senior running back and linebacker Toby Veltkamp. "He’s a great guy, lots of personality. He’s fun to be around, he’s very positive about everything and he’s just great to be around.”

The senior set the example for the Tigers and it was evident throughout their play all season long.

“He’s a quiet leader, he works his tail end off every single play," Grabowska said. "He’ll knock a kid down, and numerous times you see on film Cayl knocking a kid down and he’ll reach a hand, grab him up and pat him on the head and goes in the huddle and goes and does it the next play. That’s the kind of player he was, that’s what our other players were looking up to and that’s what they want to be like, too."

As for Deboer, he was one of the team captains and after Saturday’s championship win, he was chosen to go grab the first-place hardware.