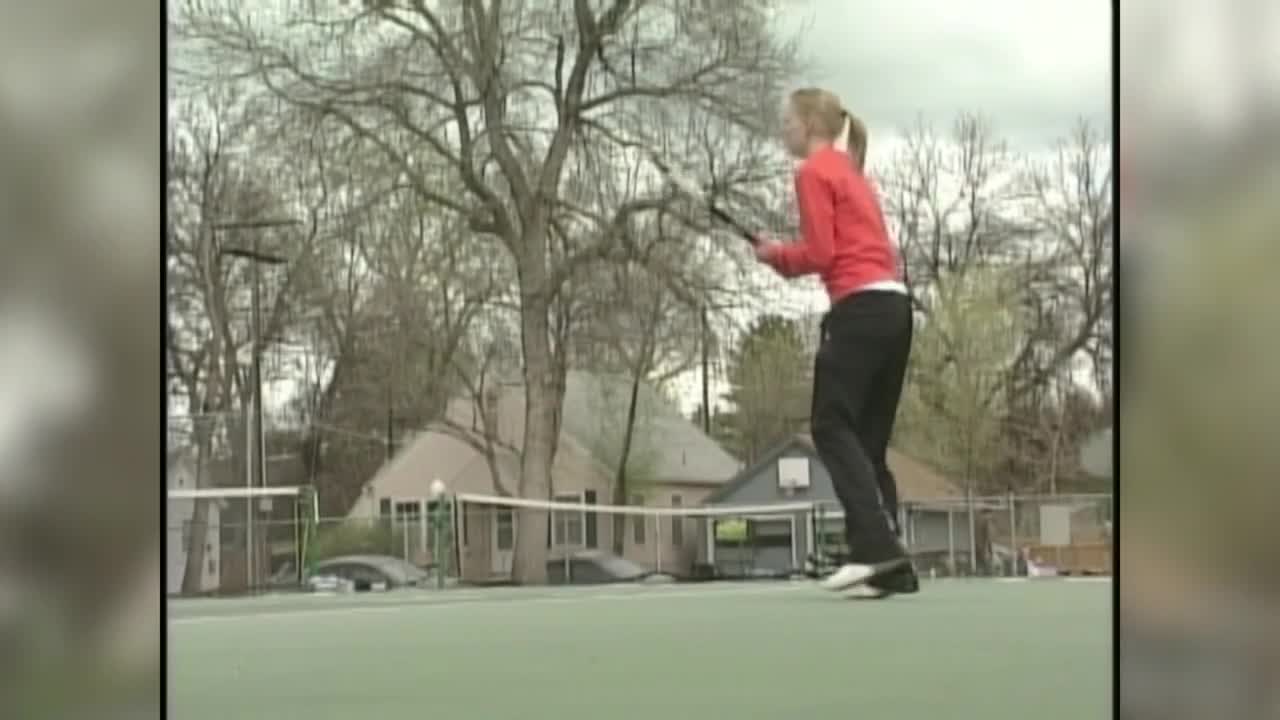 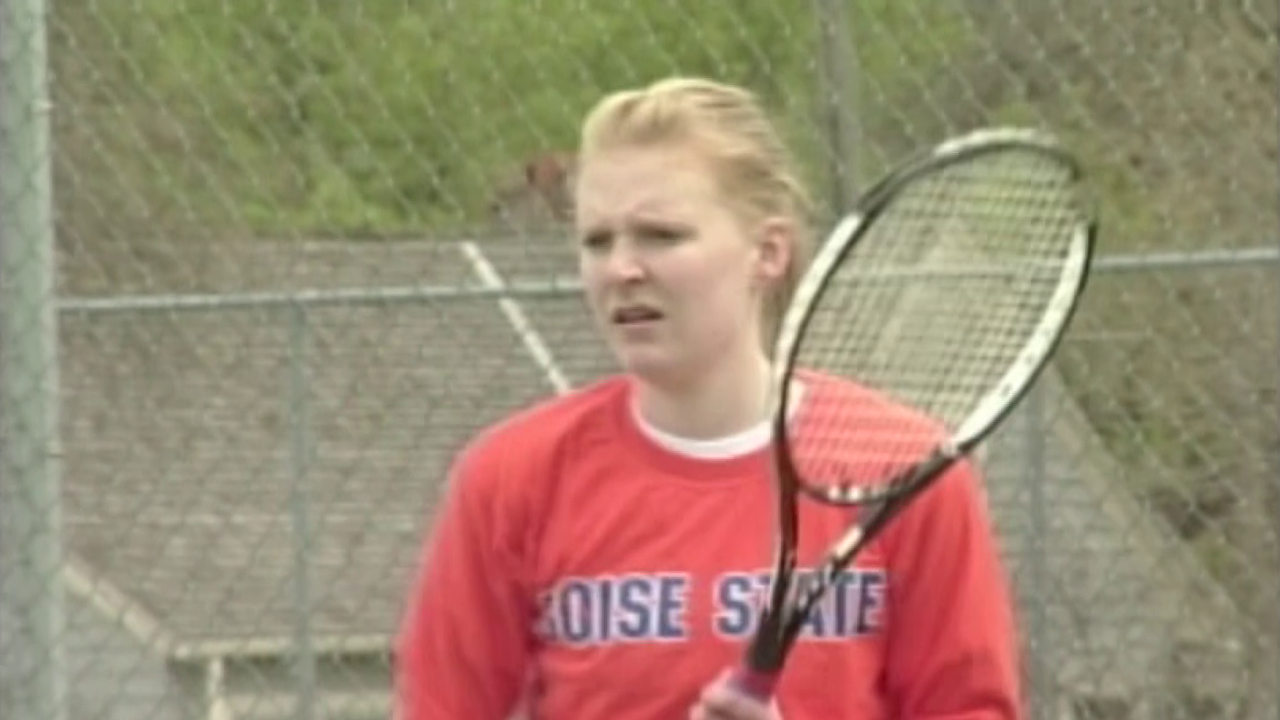 BOSTON — Nearly eight years had passed since someone outside her family called Kendra Harris by her nickname. A decade ago, it’s the only name she went by.

“Missy actually came from my brothers, they used to call me ‘the little miss’ when I was really young, and it kind of evolved into Missy, and it's kind of what I went by through high school and college, really,” Harris explained.

Tennis was a family sport — Don Harris, Missy’s father, was a state champion in Missoula who played collegiately at the University of Montana, while her older brothers Kevin and Sean were both state champions at Senior who continued their careers at West Point.

Missy, though, wasn’t so sure about the sport.

“It was not love at first sight,” she laughed. “I think I grew to love it over time. … I liked to play soccer and I played baseball and played those kinds of things, and I enjoyed them more because I got to do them with my friends. So tennis was definitely something, the whole family was doing it so it's kind of a family thing, initially. I definitely went through my periods of time where I did not want to do it anymore and didn't like it, but grew to love it over time.”

Success didn’t come immediately — Missy was around 8 or 9 competing against 12-year-olds and “getting killed by everyone” in those early years. Fast forward a few years and Harris placed sixth at a national open in Spokane, Wash., qualifying for a super national tournament in Florida.

In an instant, everything clicked.

Harris switched her focus, dedicating more time to tennis, honing her craft. She watched as Kevin and Sean won their state titles — Kevin once in doubles, Sean thrice in singles — and set her goals at the highest level.

“I thought it would be cool (to win four state titles). I knew Ristine Olsen, who was the last girl who had done it, she was a family friend. I kind of looked up to her growing up,” said Harris. “I saw it more as a challenge, where Sean and I would compete and see who could lose the least amount of games in a set, things like that.

“When Sean won three (titles), I wanted to do four, of course, because I needed to beat him, obviously, if I'm the competitive little sister.”

“I ended up having a really weird thing where my tricep had grown over my ulnar nerve, and it was pinching my nerve when I was playing tennis,” she explained.

Harris was given the green light on her senior season, though she hadn’t picked up a racket since fall. Turns out it didn’t matter.

Grateful to simply be back on the court, Harris entered the Class AA state tournament with a perfect 69-0 mark, then breezed through the bracket at state with only two dropped games, finishing a perfect 73-0 as Montana’s fourth four-time girls singles state tennis champion.

“I think it was relief, you know, because you're like, ‘OK, I did it. It's done. I don’t have to think about it anymore,’” she said. “Just kind of the culmination of your high school career and transitioning into ‘OK, I've finished this chapter in my life, and now I'm ready to start college tennis.’ I think relief was kind of the main thing that I was feeling.”

Harris capped her high school years with a trifecta — 73-0, four state titles and a perfect 4.0 GPA — before joining Montana State’s tennis team as a freshman. After a 15-2 record as the Bobcats’ No. 2 singles player, plus an 11-6 mark in doubles, she transferred to the University of Utah — her original preferred choice before her elbow injury had cast uncertainty on her future.

Harris competed in both the Mountain West and Pac-12 during her career with the Utes, facing some of the top programs in the NCAA.

“I'm an outpatient physical therapist, and they redeployed us into inpatient, so I’ve been working in the ICU for the past, I guess since the (coronavirus) pandemic hit. And we're doing this technique, people may have heard of it, I’m on a prone team,” Harris said. “Our job is to go in and re-position these patients onto their stomach. They have better stats, so better oxygen levels, they're able to wean off ventilators quicker. So I'm on a team, a specialty team, that goes in and does that for all the patients that are in the ICU.”

“It feels good to help. I think that it feels good to be able to do something,” she continued. “It's been a good experience in terms of working with other professionals — I’m working on teams with nurses and occupational therapists and technicians from around the hospital. … It makes me really appreciate what I do get to do for a career, for sure. I definitely have a newfound appreciation.”

It’s another impressive line on a growing resume — Harris moves to Chicago in August for a fellowship in orthopedic physical therapy at Northwestern University — a resume that will always include the incredible run on Montana’s tennis courts.

“I actually don't play anymore. I took up running after I finished with my college tennis career and now just do mostly marathon running. That’s kind of my thing now,” said Harris. “There's not a lot of time for tennis, and you always have to find someone to play with, which is the other struggle there. So I don't really play at all anymore, but my brother pesters me almost every time I come home to hit, so I'm sure at some point I may go back to it.”

“I ran the Boston Marathon (in 2017), which was a great experience,” continued Harris. “I always kind of ran on the side for fun, cross training for tennis, so it was kind of fun to really devote all my time to it. It's kind of been a fun thing to work at, a new sport or skill to kind of work on getting better at. It’s been fun, I’ve enjoyed it a lot.”

Running enthusiasts will be impressed when seeing Kendra Harris’ results — she placed in the top seven percent of women at the 2017 Boston Marathon — but they may never know the damage she first did as Missy Harris on the tennis courts.