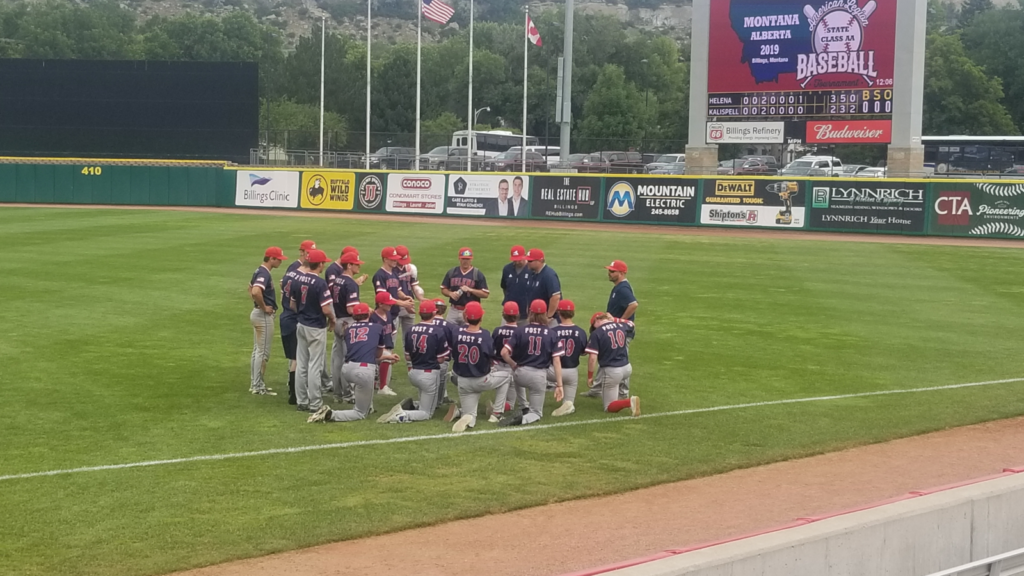 BILLINGS --The Helena Senators won the opening game of the 2019 State AA American Legion Baseball tournament at Dehler Park in Billings in dramatic fashion over the Kalispell Lakers on Saturday morning.

With the game knotted at two in the top of the seventh inning, Helena left fielder Zach Spiroff ripped a pitch into the left-center field gap, scoring teammate Tyler Tenney and pushing Helena ahead 3-2. Ethan Keintz shut the door in the bottom of the seventh to give the No. 6-seeded Senators a win over No. 3. Kalispell.

"We knew he was locked in when he laid off a close curveball. He had a good read on it, so I kind of checked that outfielder and thought he had a good chance to burn him. He sent the next one over his head," Helena head coach Jon Burnett said. "That's one of our seniors coming through in a big spot."

The seventh inning didn't come without stress for Keintz, though. He hit the lead-off batter and walked another sandwiched between a sacrifice bunt. With two runners on and just one out, Keintz induced pop outs on the final two batters of the game.

"(Keintz) is a strike thrower, so when he got into those three-ball counts it was a little out of his norm because he usually pounds the strike zone," Burnett said. "We knew he could battle back and we knew he was the right guy in the right situation. He battled back and made some good pitches."

Helena struck first in the state tournament, pushing two runs across in the top of the third inning. Ty McGurran singled to center to score Spiroff, before McGurran came around to score on a throwing error by Kalispell shortstop Connor Drish. Kalispell tied the game up in the bottom half of the inning on a pair of bases-loaded walks.

Kalispell, though, struggled to push runs across the plate and managed just three hits on the day and left nine on base. Logan Siblerud pitched a complete game for the Lakers, giving up five hits and three runs (two earned).

Spiroff reached base in all three plate appearances for Helena, recording a pair of hits and a walk. He also scored a run and had one RBI.

Helena will play Sunday at 4 p.m. against Bozeman.

Missoula jumped all over Great Falls in the bottom of the first inning, as the No. 2-seeded Mavericks hung seven runs on the board on their way to a 9-1 win over the Chargers in the first round of the State AA American Legion Baseball tournament in Billings.

Although Missoula would push two more runs across in the fourth inning, the Mavericks didn't have a base hit after the first inning.

"The first inning, everything went our way. We had a couple swinging bunts that we didn't square up at all, but we did hit a few hard after they did put some guys on for us for free. After that our intensity just disappeared, went away," Missoula head coach Brent Hathaway said. "We didn't have a hit after the first inning which is disappointing."

Dylan Chalmers pitched efficiently for Missoula, giving up just three hits and one unearned run over the course of 6 1/3 innings. Chalmers also threw just 75 pitches, which would make him available later in the tournament should the Mavericks advance that far.

"We've seen Dylan better, honestly, but he was good enough today," Hathaway said. "We got him out under 80 (pitches), which was our goal. If we can stay alive for three days, he's going to be available to us in the tournament. That's a huge plus to be able to throw him twice, so fingers crossed we're still around."

Missoula will play at 7 p.m. on Sunday the Billings Royals.