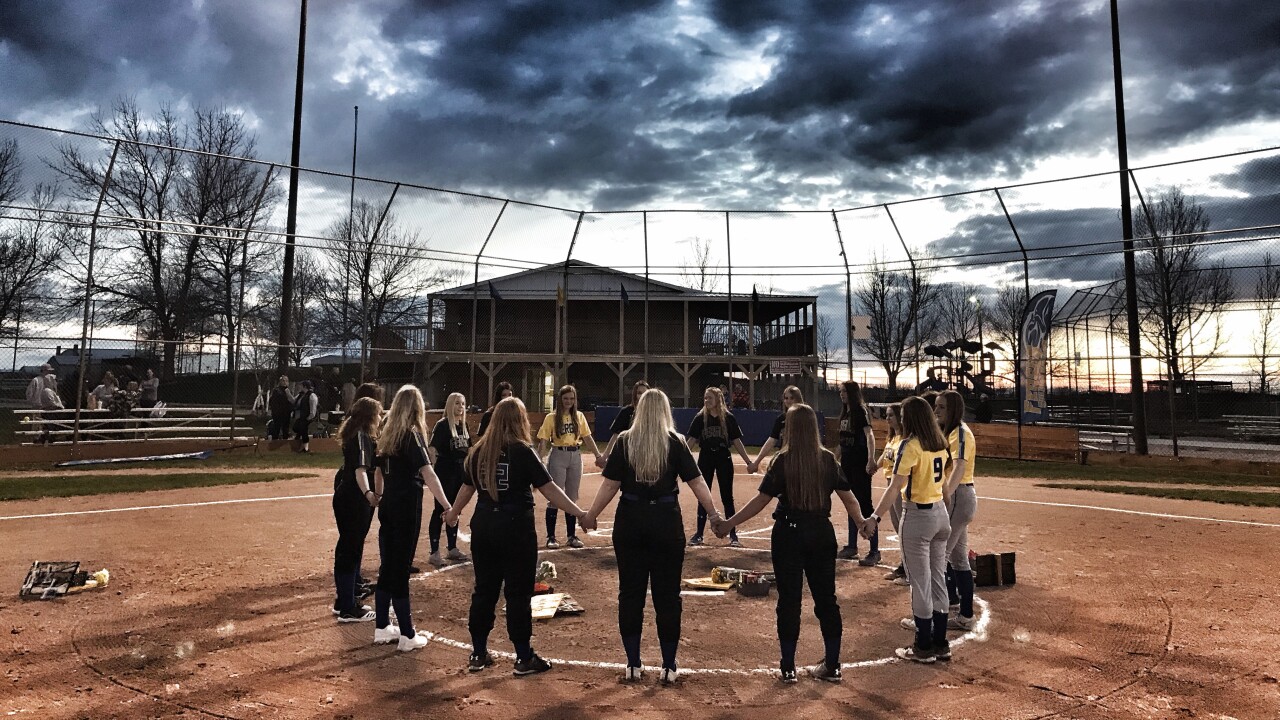 Courtesy Mike Mangold
The Lewistown softball team came together to celebrate a 'Senior Night' during the canceled 2020 season.

He wears a variety of hats in Lewistown, including umpire, coach and biology teacher. But, most importantly, he’s a father. His daughter had her senior softball season canceled this spring, so Mangold can empathize with those parents who missed out on Senior Nights.

And his son is currently practicing for his freshman football season at Fergus High School, so Mangold can empathize with those parents and fans who so badly want to be in the stands under those fall Friday night lights.

Mangold has been plenty frustrated at different times of the coronavirus pandemic. He’s been the head softball coach at Lewistown since the program played its first varsity season in 2010. This year’s team, which included his daughter Macy, was positioned for a stellar season and had championship aspirations.

Once the spring seasons were indefinitely postponed because of COVID-19, the elder Mangold pitched playing conference-only softball schedules with limited or no fan attendance. He was sure the teams could implement safety protocols to do their best to limit the spread of the coronavirus. Ultimately, though, the Montana High School Association elected to cancel the spring sports seasons. Now, many of Mangold’s ideas from the spring are being implemented this fall as schools try to return to some sense of normalcy with football, volleyball, soccer, cross country and golf competitions.

“Was I upset and stuff when we weren’t able to play? Yeah,” Mangold said. “This pandemic brings out the good in people, but it also brings out the worst in people, and I saw the worst in me during that whole quarantine. But now after going through it, I understand now what I needed to do and the things that I would give up in order for my daughter and the rest of her fellow seniors in order to see that season through.”

An eternal optimist, Mangold never lost hope during the early indefinite postponement that his team would be able to play in the spring, and he was admittedly emotional when the season was officially canceled. That same optimism has Mangold expecting the fall sports seasons to culminate with championships being played, but he’s also aware the situation remains tenuous and a spike in positive COVID-19 cases could derail the fall seasons.

Fergus isn’t among Montana’s hardest-hit counties, but the Golden Eagles will still play their home contests in front of only local fans. According to Mangold, no visiting fans will be allowed, but local residents will be permitted entry to Fergus High School events. After hosting a golf meet on Monday, Aug. 24, Lewistown’s first home football game is a junior varsity game with Lockwood on Sept. 8. The Golden Eagles’ volleyball home opener is scheduled for Sept. 12 against Glendive, and the varsity football home opener is Sept. 18 against reigning Class A state champion Miles City.

Other counties have also rolled out spectator guidelines, with Flathead and Custer counties placing similar restrictions to Fergus County. Yellowstone County and Lewis and Clark County have gone the furthest, prohibiting any spectators from attending athletic events. Fans and parents across Montana have banned together to create a Facebook page and launch a petition in response to the county guidelines.

“When these parents are complaining about not being able to watch their kids, not being able to go into the stands, it’s really frustrating, because you, as a parent that’s gone through this, you know basically what the results would be if they don’t (follow the guidelines),” Mangold said.

“We want our kids to put in the extra time and work to get better at their craft,” he added. “But are we willing to do the same and do the things we need to do in order for them to get to perform their craft?”