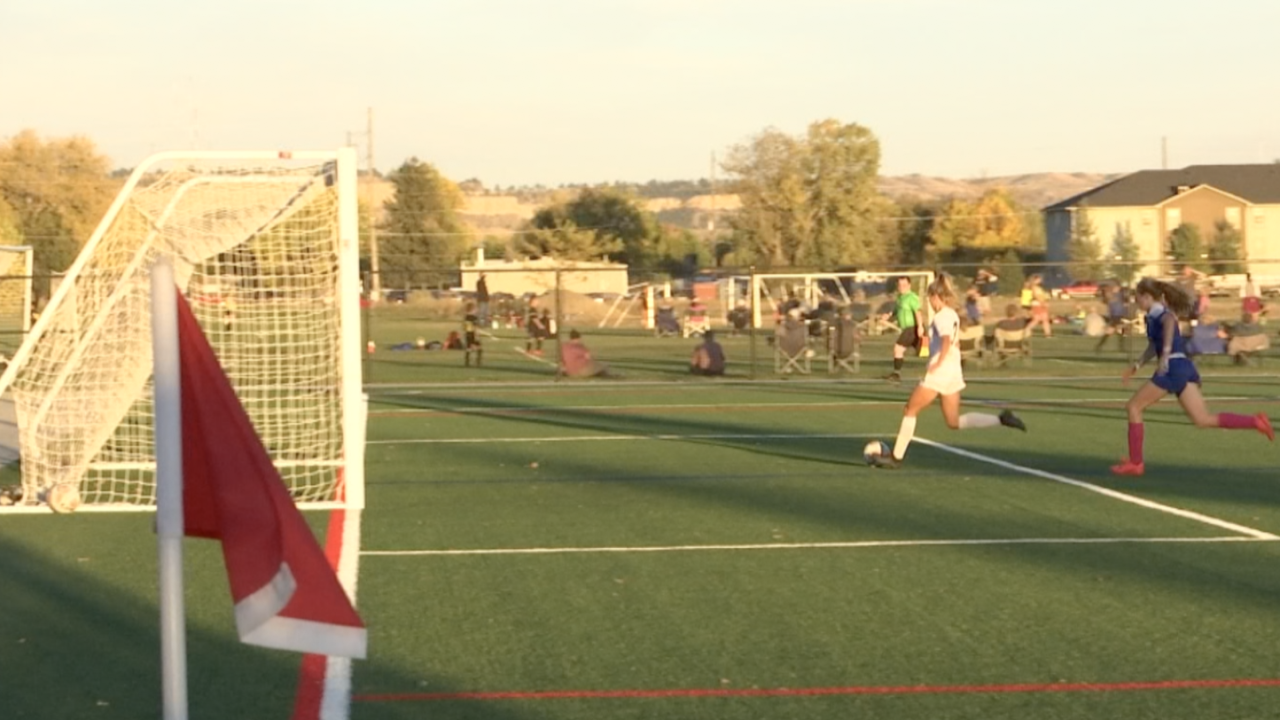 BILLINGS -- Sometimes rules are tough at Emma Lensing’s house. Her mom might even go so far as to say, "We need a hat trick or you can’t come home for dinner."

“I guess I can’t come home from dinner tonight,” Lensing joked (we think) to MTN Sports recently after scoring only twice in Billings West's convincing girls soccer win over Billings Skyview. Instead of dinner after her interview, Lensing spent a couple hours at the hospital requiring stitches on her top lip.

“Courtnie (Gagnon) played it to me," Lensing recalled of a play in the first half of West's match. "I was going up for the header and (the defender) punched me right in the lip.”

Under the circumstances, who knows if Lensing would have been able to eat dinner even had she netted a hat trick. And she'd be a good bet to do it.

Entering this week's playoffs, Lensing had delivered 15 goals for the unbeaten Bears, despite sitting out four matches with an injured foot. While those minutes on the bench would be miserable for most, Lensing found the bright side.

“Oh goodness, it was definitely a challenge but taught me to be always positive, looking for all the positive contributions my team has made," she said. "And coaching them through, it was a good experience to learn from and take away some good contributions, as well.”

“She’s got speed and touch and has kind of got the whole package," he said. "(She) has a deadly combination. Her composure in front of goal has gotten a lot better this year and she’s been able to score some key goals for us.”

Those are partially a credit to daily practice battles against Montana’s top defense, one that Lensing doesn’t take for granted.

“I think we’ve given up just four goals this year, which is the least in the state," the junior forward said. "We have brick walls back there. It’s insane. I mean, even in practice it’s so difficult to get past them. And even learning how they move as a group, we still can’t even get past them in practice.”

Defender Courtie Gagnon is part of those brick walls.

“You’ve really got to just slow her down, move her one way, keep moving your feet," Gagnon said, laughing. "You can’t beat her.”

"She’s fast enough and intelligent enough that she makes good runs and creates a lot of her own space," Zimmerman said. "We try to play in a way that we can create space for her, but sometimes I’m just amazed at how much space she actually has to play in.”

Lensing’s collection of first-place medals through her youth soccer years is almost embarrassing. But none of them stack up to last season's 1-0 State AA championship win over Skyview.

“Your emotions are so high and your adrenaline is just pumping. Overall, regardless of the team we played, it would’ve been just crazy. It’s still crazy to me that we even won and were playing in the state championship. It just gives me, ahhh, it feels good,” Lensing said while noticeably giving way to chills of the memory.

She can always lean on that soccer family for dinner on nights when the hat trick doesn’t pan out.