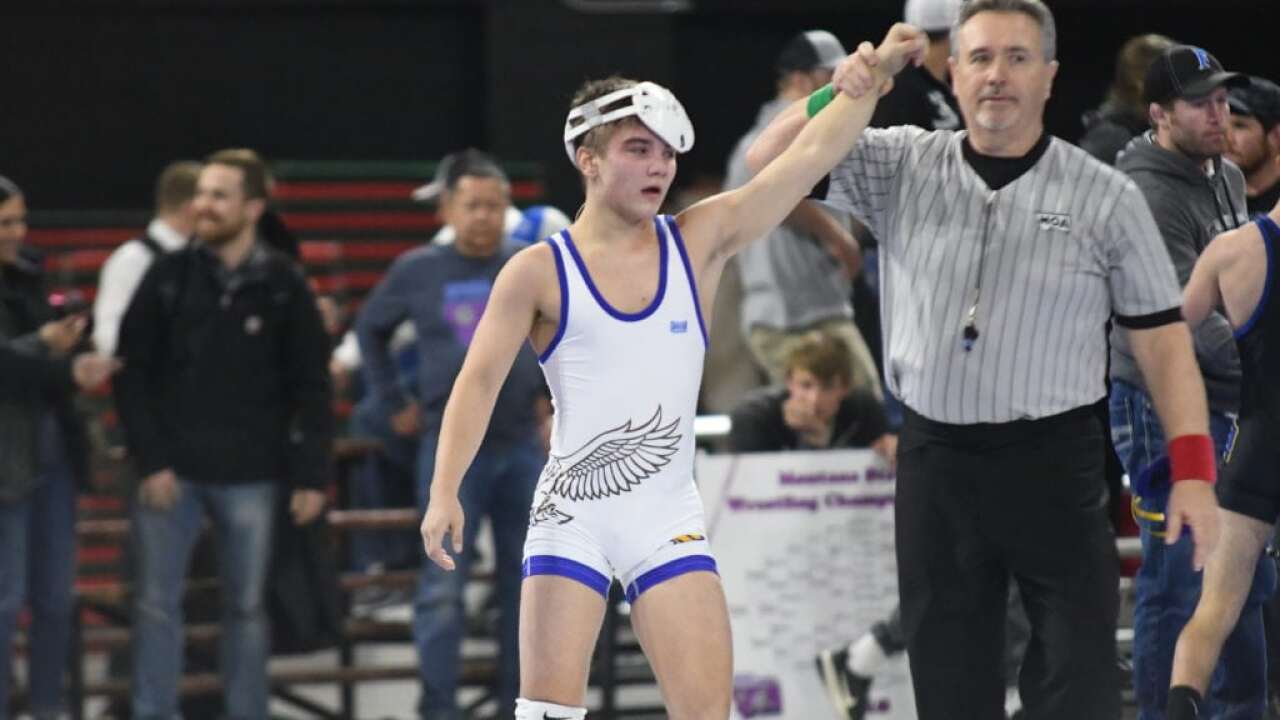 BILLINGS -- Nearly 624 high school wrestlers will put a season's worth of work on display this weekend at First Interstate Arena at MetraPark for the Montana high school state championships.

It's all business at the big barn (Metra) for the hundreds of wrestlers, dozens of teams and thousands of fans that will flock to the Magic City for Montana's most electric state tournament atmosphere.

As always, eyes will be on the quest for four-time champions, with a pair of wrestlers seeking to join the elite list. Bozeman's Leif Schroeder and Frenchtown's Jake Bibler can become the 36th and 37th four-time champions, though there is no guarantee during wrestling's biggest weekend.

Laslovich and the Hawks will look to fantastic freshman Avery Allen in the 132-pound bracket, as well as defending heavyweight runner-up Tom Walkup, for key points throughout the two-day tournament. McCade O'Reilly is also back to defend his second-place effort in the 205-pound weight class.

Great Falls High is likely to land first-year head coach Luis Carranza his first trophy as the leader of the Mighty Bison, and odds are that trophy will contain gold. Great Falls has a class-high 20 wrestlers in the tournament, with two of those -- Elijah Davis and Ethan DeRoche -- reigning champions. Davis is 29-1 and will compete in the 205-pound bracket, and DeRoche is 32-1.

Belgrade's John Mears won three individual titles in Class A, but concussions forced the future Montana Western kicker to miss the majority of his senior season.

The race for the Class A title is likely to be a short one, as Sidney returns with a chance for a three-peat, as well as an opportunity to break its own scoring record of 310.5 team points set last season.

Melby and Sidney will be after team title No. 11 this weekend.

Frenchtown doesn't have the firepower to compete with Sidney, but the Broncs could boast the most significant match of the tournament on Saturday afternoon.

Jake Bibler, a three-time state champion, is 34-1 and likely on a collision course with another title appearance, but he's likely to meet unbeaten Cooper Birdwell of Lewistown in Saturday's championship. With the 132-pound weight class beginning Saturday's championships, Bibler and Birdwell could potentially be the final match of the entire weekend.

Walker Dyer, another Frenchtown champion from last February, Landon Stewart and Eli Warner should put the Broncs in position for the second-place trophy.

Perennial power Havre, which owns 14 Class A team titles, will need to rack up points to contend for a trophy. Cameron and Riley Pleninger, Mick Chagnon, Connor Harris and Orion Thivierge are among the wrestlers looking for high podium finishes this weekend for coach Beau LaSalle.

The Class B-C titles appear to be up in the air, well, half of them anyway. Circle is on the fast track to win the State C title again, with Krayle Stormer out to defend his individual title from a year ago. Cole Becker, Canyon Casterline and Tugg Taylor each finished fourth in 2019, and podium finishes should lead the Wildcats back to the No. 1 position.

Bryson Bartelson also qualified for the state tournament for Circle.

Glasgow and Huntley Project will be in a race for the most points to capture the Class B championship. The Scotties sent 10 individuals to the final weekend, with Colten Fast and Dylan Nieskens seeking titles for the second year in a row. Kaden Zimmerman also spent a good portion of the season ranked No. 1 for coach Jory Casterline.

Huntley Project qualified 11 for the state tournament, edging Glasgow for the Eastern B-C title a week ago. Clayton Donally and Journey Grimsrud finished second at the 2019 state tournament, while Stran Selman was sixth.

Colstrip brings a pair of 2019 champions to the tournament in Rylin Burns and Trey Yates, who have combined or 83 wins and 12 losses this season, according to www.trackwrestling.com.

Columbus-Absarokee's Tanner Cook and Eureka's Gunnar Smith also won titles a year ago, with Smith now a two-time champion for the Lions.

Wrestlers will report to MetraPark by 8 a.m. Friday for the official weigh-ins, with the Parade of Athletes set for 9:50 a.m. The first round will begin around 10:20, with quarterfinals and first-round consolation matches scheduled for approximately 1:30 p.m.

Saturday's action begins with the semifinals and consolation quarterfinals at 9:30 a.m. Championships, beginning with the Parade of Finalists, are slated for 3:15 p.m. and will begin at 132 pounds.