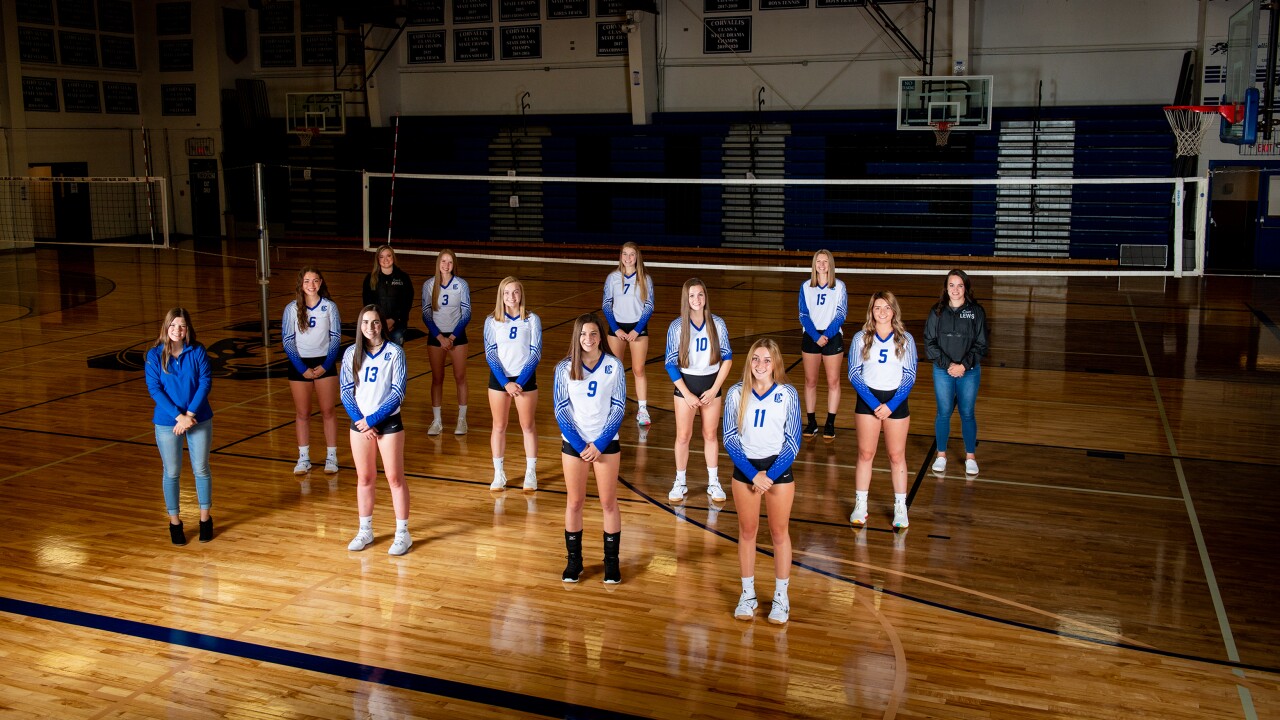 The Corvallis volleyball team has heard the chatter predicting a decline in its success this season. The reigning Class A state champion Blue Devils aren’t buying it.

“Last year, there were articles about how Butte Central was favored to win the state championship and stuff, so I actually blew up one of the articles and posted it in their locker room for motivation. This year, I made another one, and it’s a quote and it says, ‘They graduated all their good players,’ and then (attributed to) ‘haters’ ... like they’re the ones who said it,” said second-year coach Laurie Jones. “That’s their motivation for this year. And obviously there’s always other motivation — to play for yourself and to play for the program and to play for your parents and all of that, but just that little extra push is that … people aren’t expecting them to do good.”

Jones is a 2005 graduate of Corvallis and joined the program’s coaching staff in 2008. She coached the junior varsity for 11 years before taking over the varsity position prior to last season. In her first season at the helm, the Blue Devils won their third consecutive Western A divisional title. After third-place finishes in 2017 and 2018, they swept Billings Central in the 2019 championship match to win the second state title in program history.

Yes, Corvallis graduated six seniors from that team, but the cupboard is far from bare for a program that has learned how to reload in recent years. Junior outside hitter Madeline Gilder is back after a strong showing at last year’s state tournament. She has a team-high 37 kills in nine sets played during the Blue Devils’ 3-0 start this season. Senior Jenna Jordan is back, too, and gives Corvallis another strong presence at the net. She was the team’s player of the match in its season-opening sweep over Class B Deer Lodge.

The start to the season has come with a cobbled-together roster, too. Madison Lewis, a junior middle blocker, injured her knee during the offseason and is just now working her way back into game shape.

“We had to have a defensive specialist become an outside and our outside become a middle. To get those three wins with a less-than-ideal rotation, I think, just goes to show that they have mental toughness and perseverance and determination and all of that,” Jones said, adding that Lewis is set to return Thursday for Corvallis’ Homecoming game against Frenchtown.

“I think now that we have our girls back and we kind of have girls in the positions that we want them in and they’re the best in, I’m hoping to see even better things out of them,” Jones continued.

One of the girls who stepped in to help fill the void created by Lewis’ injury was 5-foot-5 junior Paige Coleprete. Normally a defensive specialist known for her consistent passing, Coleprete moved to play outside hitter during the Blue Devils’ first three matches of the season.

“Over the summer it’s like she got stronger, a little more physically mature, and us coaches even talked about her when we were having tryouts. It was like, ‘Man, Paige … made that jump to being an upperclassmen and someone we think is going to make a big impact for this team,’” Jones said. “And sure enough, she has.”

Of course, championship-caliber teams can usually go only as far as their setters will take them, and Corvallis seems to be in capable hands. Senior Brooklyn Powell has stepped into the position and was voted a team captain, providing the Blue Devils with steady on- and off-court leadership.

The team has seen further stability in its leadership, which Jones said has helped the program make the transition from “middle of the road” to consistent contender. Before Jones was elevated to head coach, she worked under Kasey Arceniega, who led the Blue Devils to the 2013 state title and a runner-up finish in 2015. Arceniega is now in her first season as the head coach at Missoula Sentinel.

But the consistency in the coaching staff at Corvallis has helped build a culture and raise expectations.

“It just kind of slowly became this program. It wasn’t really this big overnight sensation where the girls were feeling all this pressure or it was culture shock or anything,” Jones said. “I think with the current girls now, it’s just maintaining that. It’s just knowing that when they come into this program that they’re going to be pushed and challenged and it’s not going to be easy, but it’s going to be worth it.”