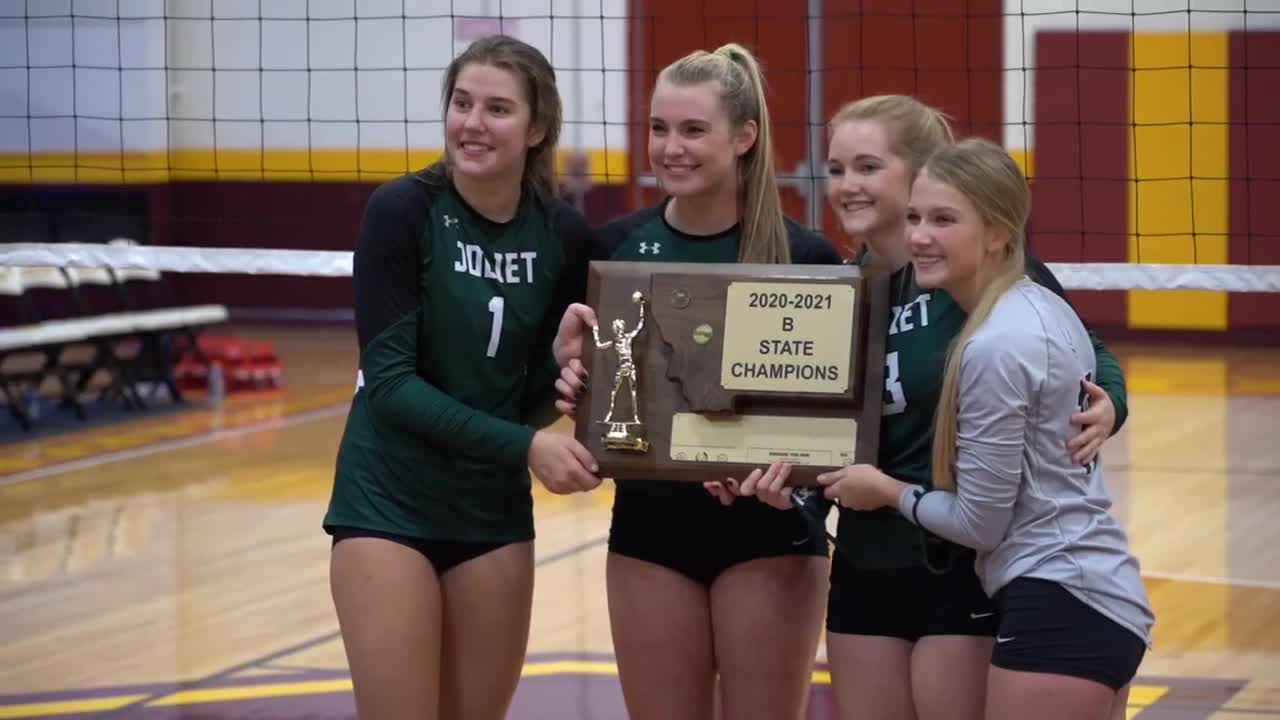 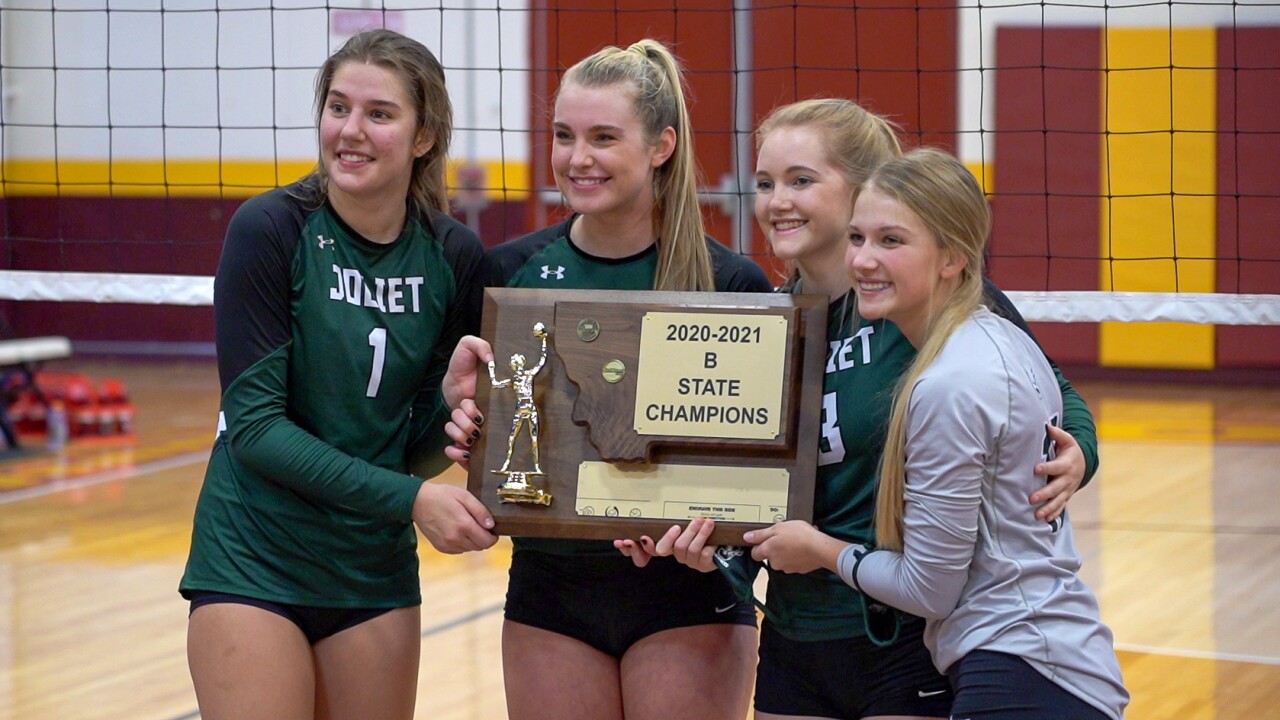 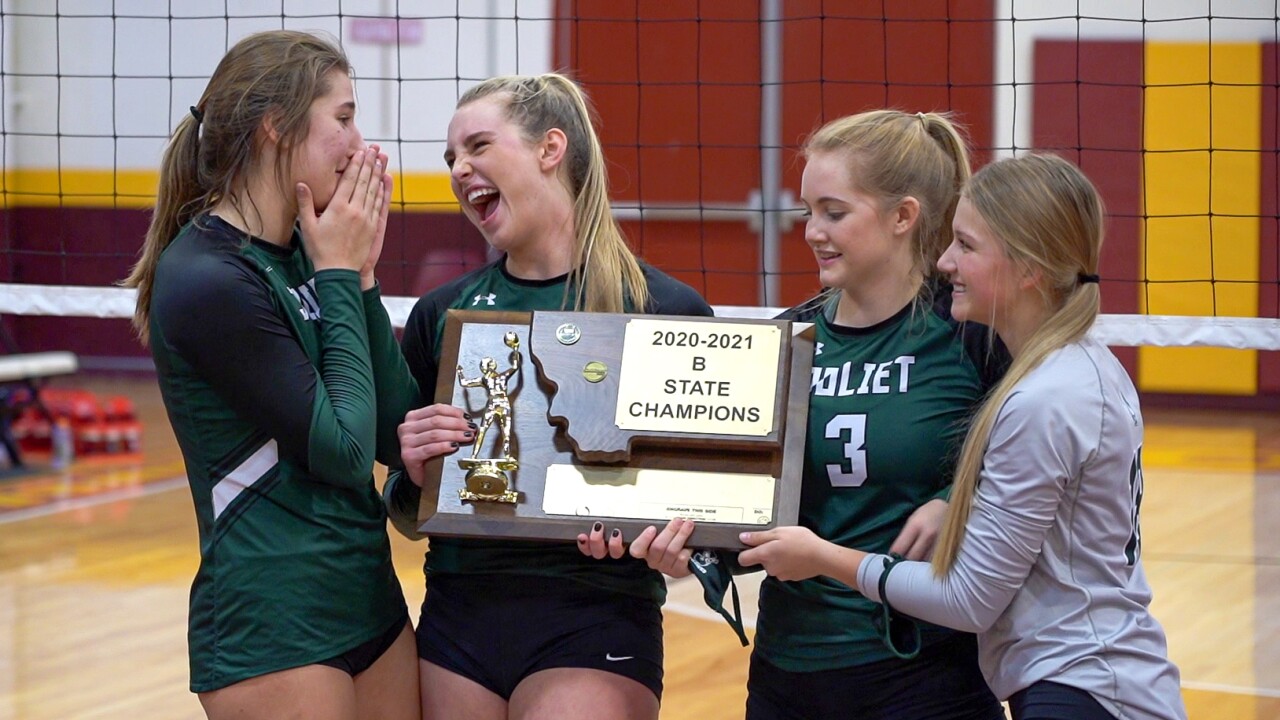 SHELBY -- What a year it was for the Joliet J-Hawks volleyball program, finishing 2020 the same way they started by snapping a Huntley Project streak. Back at the beginning of the season, the first win, Joliet snapped that 101-match winning streak by the Red Devils, then, fast forward to Saturday and the J-Hawks were ending the Project’s three-year reign as the State B champion.

It was a sweep for the J-Hawks, and for the four seniors on the Joliet roster, they leave with one of each state trophy: finishing third as freshmen in 2017, junior year of 2019 it was second place and they leave 2020 with the first state championship in program history.

“It’s way better, way better,” defensive specialist Kylia Kliner said of the reality of winning a state title compared to the dream. “It just feels so good, bittersweet, our senior year. I walked off the court (subbing out) and they got that last point, my heart dropped. My heart dropped. That was the last time I was on the court and we’re state champs.”

Joliet’s seniors— Kliner, Makenna Bushman, Merrin Schwend and Skyler Wright — each played pivotal roles in the state championship run, and each made sure to meet the expectations they held of one another.

“I would say probably every class I’ve had has wanted to beat Huntley Project, but this group of girls, I think all the state experiences they’ve had for four years has made them confident,” said Joliet coach Colette Webber. “We went to five with Huntley Project last year, and they were a phenomenal team, and I think those girls that got to play — I had five girls that got to play in that match — they came back and they wanted it. They wanted to have that feeling again, but they had the confidence, too.”

Saturday’s was the first state championship in Joliet volleyball history and was years in the making for a senior class that’s invested the time and energy necessary to take the program to the highest level.

“It’s the start of a new era,” promised middle hitter Bushman. “To see all the little girls at home that I know are going to be playing volleyball, it’s just like, ‘OK, I helped. I started it.’”

“It’s pretty crazy. It’s nice to know that we’ve worked this hard for four years in my high school career, plus (prior to it), and our program has grown so much,” said Schwend, the team’s setter. “They’re willing to work hard next year and the program is going to continue to grow.”

The underclassmen had great leadership to look up to, on the court and off.

“It was so good. We got a room together, it was so fun. We were playing Guitar Hero, that was our mentality. We had matching pajamas this weekend, it was so cool,” beamed Kliner.