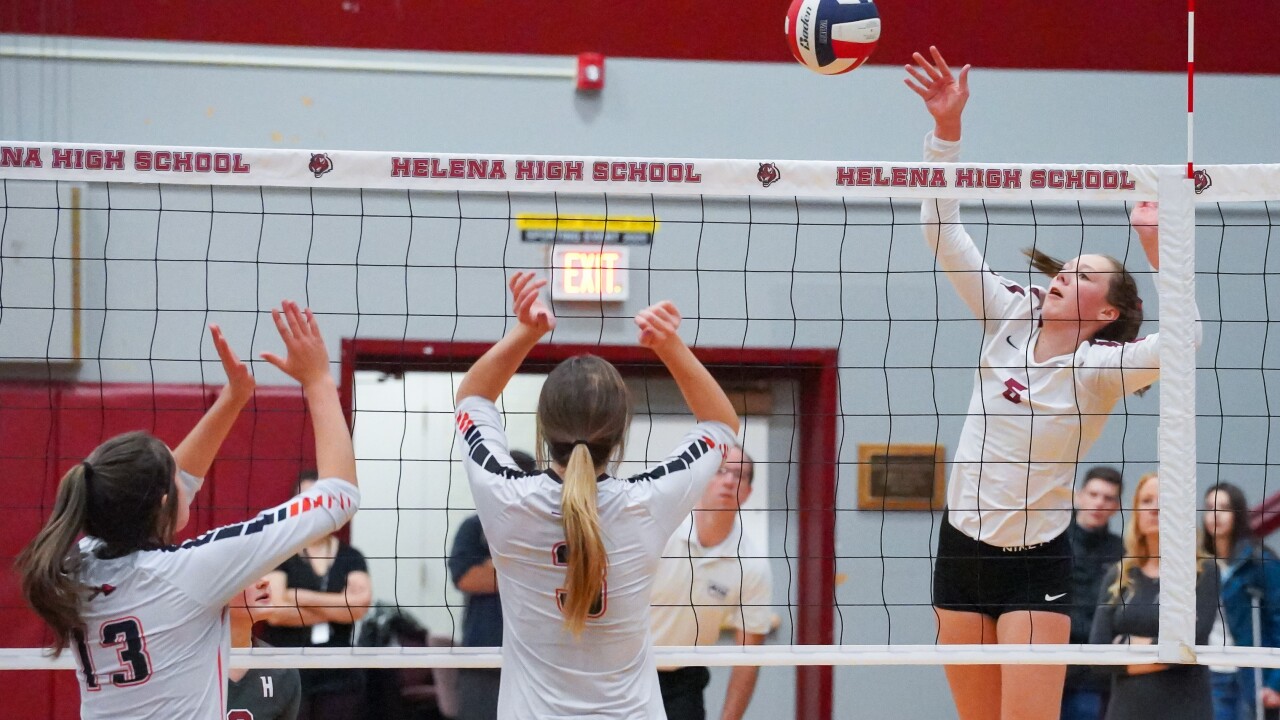 HELENA -- Elizabeth Heuiser had a match-high 15 kills to go with nine digs, three aces and a block as No. 2-seeded Helena High defeated Kalispell Flathead in a Western AA play-in game on Thursday evening. The Bengals defeated the Bravettes 29-27, 25-17, 25-14.

Heuiser was excellent Thursday, but Helena did face adversity from the upstart Bravettes. Flathead stared down set point in the opening set, before the Bengals tied the match at 25-all to force extras. Each team had set-point within grasp before Helena pulled away for the 29-27 win.

"Flathead played really well that first set, and we had a hard time putting the ball away. They were picking up everything," said Helena head coach Lindsey Day. "I was really pleased with how the girls played relaxed and played to win, didn't play tight in that really intense match.

"I just told them to relax, relax and have fun. Their bodies know what to do, they just had to relax and allow themselves to make the big play when we need it, and they did."

The rest of the night belonged to Helena High (18-4, 12-2), which will seek its first Class AA state volleyball championship since 2011 when it heads to the state tournament next weekend at Brick Breeden Fieldhouse in Bozeman. The Bengals scored the first four points of the second set, building an impressive lead and withstanding a late Flathead rally.

Heuiser played a key role in keeping the Bravettes at bay, finishing with a match-high 15 kills, as well as nine digs, three aces and a block.

Flathead was led by Julia Burden's 10 kills and Mayson Moore's 17 assists. Maddie Lindbom had a team-high six digs, while Kelsie King served up three aces in the loss.

Now the Bengals turn their attention to Billings Senior, the No. 3 seed from the Eastern AA. The two are unofficially scheduled to match up next Thursday at 4 p.m. in the final first-round game of the State AA's opening round.

"It feels really great. We're going to take a couple days off, I have some (girls with injuries), so we'll take a couple days off and get healthy, then go back at it on Monday," said Day. "We all know (Helena) Capital is the top runner, they're going to be tough to beat, but from there, there are a lot of teams we haven't faced in the other conference, so I'm excited to see how we match up with some other teams on that side.

"I feel like we've grown so much, and they continue to do great things, mold together as a team. I'm excited to see what we can do at state."