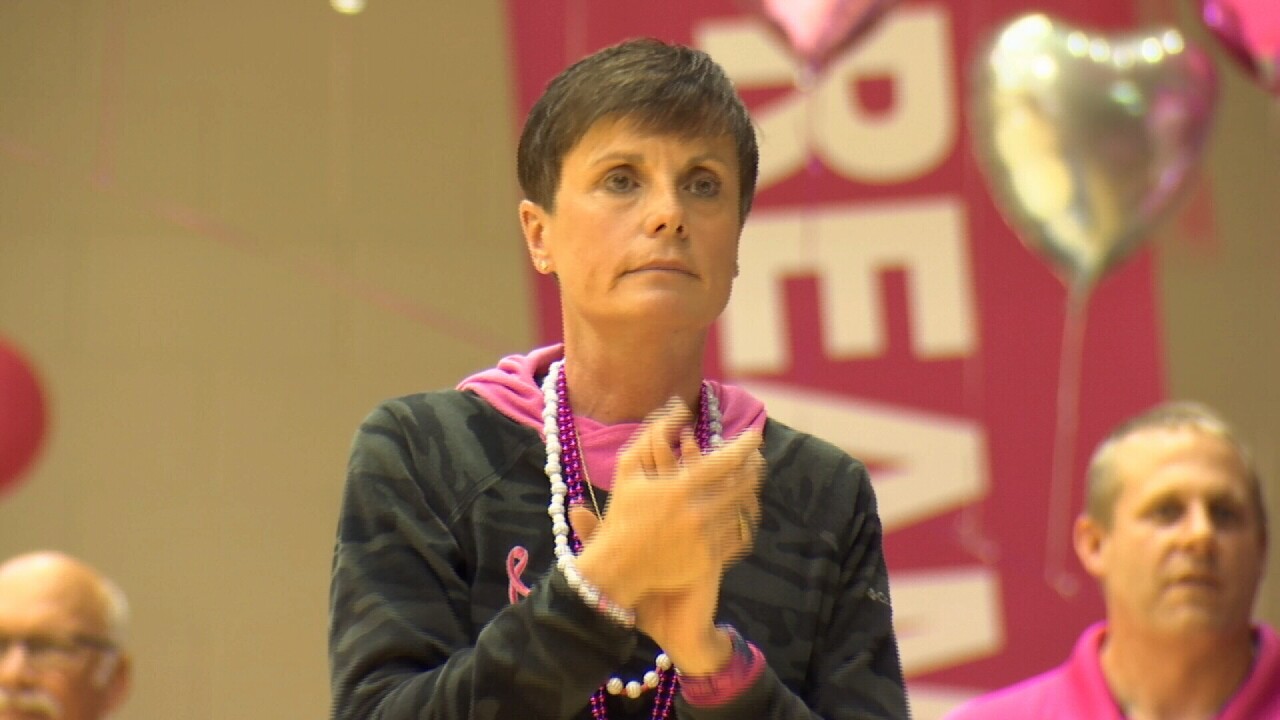 BILLINGS -- The idea was launched by Vicki Carle's Billings Skyview volleyball girls more than a decade ago. Players wore pink socks and wanted to sell T-shirts to help Carle manage her breast cancer diagnosis in 2007.

Pack the Place in Pink has since raised more than $500,000 and has given 95 percent to Montana women dealing with the same diagnosis. This year's official celebration comes in a crosstown match between Skyview and Billings West on Thursday, Oct. 29.

The magnitude of how far this grassroots event has come reveals itself in a pair of Carle's most recent stories.

“I was an Albertson’s, and there’s a woman in line in front of me who is telling the checker she had just gone through breast cancer," Carle recalled to MTN Sports and MontanaSports.com earlier this week. "Of course, the words breast cancer -- I’m sorry I was eavesdropping, but I always perk up when I hear that. So when it was my turn, I got up there and say, 'Do you know that lady?' She said, 'Yeah, she comes in here.' I said, 'So she just had breast cancer surgery?' She goes, 'Yeah, she did.' I introduced myself and said I need to know who that is. She goes, 'Vicki, here, take this piece of paper.' So I sprinted out into the parking lot, got her name and address and I went home and wrote her a check and sent it to her in the mail.“

Or how about this one from the Frontier Cancer Center in Billings?

“There were a couple women in there who had Pack the Place in Pink shirts on and the one had a bandanna on," Carle said. "And I went over to them, because I was there for my six-month check, and I said, 'Hey, I like your shirt.' And they just started to tell me all about Pack the Place in Pink. I said, 'Well, yeah, I know a little bit about it,' and I introduced myself. We all three cried. I have my checkbook with me and wrote her a check and gave her a check right there in the waiting room."

If you don’t happen to run into Carle at the cancer center or at the store, here’s how referrals work:

“You get online and there are about six or seven questions you fill in," Carle said. "It comes into our I.T., goes through a circle and our nurses check it out. When they get the OK they send it back to me and I write out a letter and a check. It’s not real difficult, which is how we want it to be."

Their referral website is www.packtheplaceinpink.org, and the group is again full speed ahead raising money for it. T-shirts are on sale at Albertson's in the Billings Heights for $10.

The rest of this year's fund-raising is set up mostly online via Pack the Place in Pink on Facebook. Specifically, the online auction starts Thursday (Oct. 15), according to Carle, and is loaded with items from creative steel cutouts to gift cards for a steakhouse in Ennis to auction items from as far away as Kalispell. And for those interested in donating auction items, that's also the spot.

Maybe the coolest twist that separates Pack the Place in Pink from other charities is that patients are encouraged to spend their assistance outside of medical bills.

“One of the lines I put on the check is, 'Use this money however you see fit,'" Carle said. "We’ve had women who have purchased tires, purchased eyeglasses. I think one of my favorite, heartfelt ones was the woman who was Stage 4, and she didn’t make it very long, but she bought two wigs so she could have different hair color, bought herself a guitar and a puppy. And I thought, God bless you for enjoying what you have and making the best of what you have.

“It’s very empowering to write a check and send it to somebody who I know will be so grateful and so honored. And (encouragement) is such a necessary thing as you fight. The money is great, but the hope and the love that comes with the letter (that is included) helps you defeat cancer, because it’s a hell of a battle."