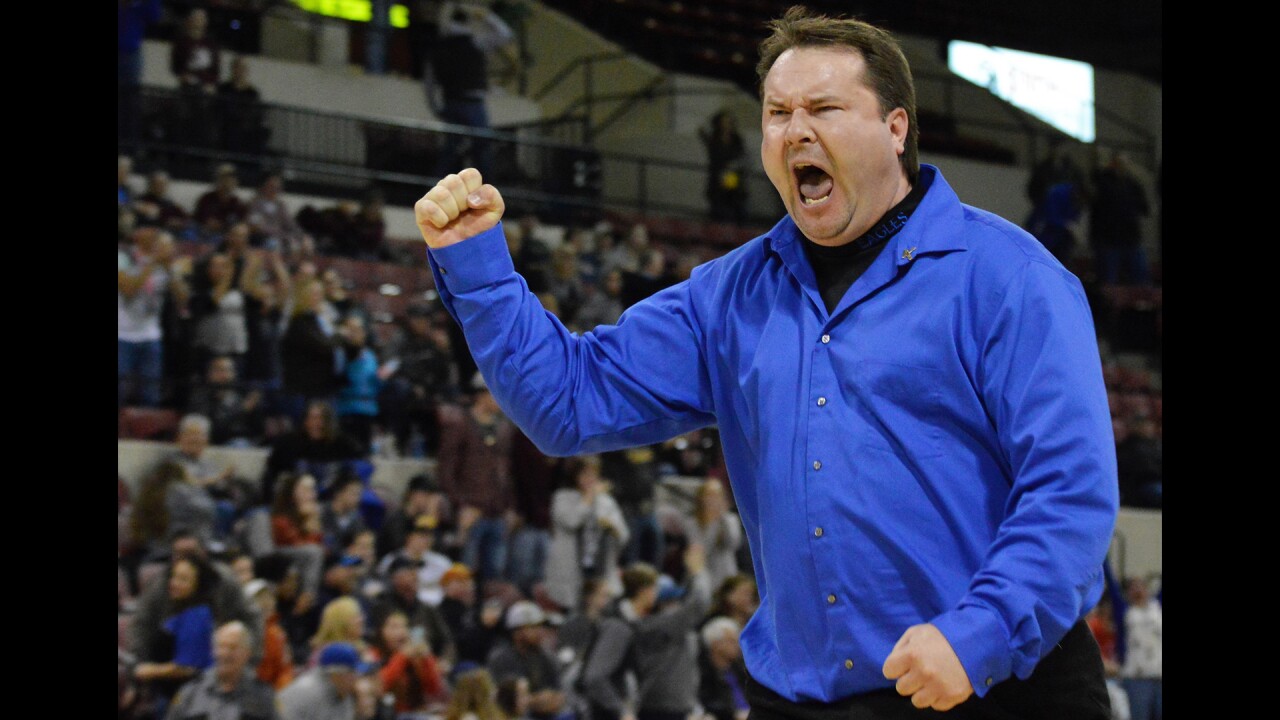 His turtles have been there for each one of them.

“It’s a cool story. It’s kind of a family story,” said Gordon, who has resigned from his coaching position after leading the Eagles for 14 years. “I think all sports people have some sort of superstition. Whether it’s your lucky socks or lucky shirt or whatever, everybody does.”

The story goes back to when Gordon was coaching at Chester. The 2005-06 season marked the first year of the Chester-Joplin-Inverness co-op and the third consecutive appearance at the Class C state tournament for Gordon’s program. The Hawks reached the state championship game for the first time in Gordon’s tenure that season.

Prior to the game, Gordon’s son Taylor won a rubber turtle at an arcade. It wasn’t just one turtle, though. Taylor won one for every member of the team, including his dad. The coach put the turtle in his pocket and — even though the Hawks lost to Reed Point-Rapelje that night — a superstition was born.

That championship, which capped a 25-1 2007-08 season for Fairfield, started a historic stretch for Gordon and the Eagles. They won another title in 2009 and Gordon added a second turtle figurine to his pocket not long after.

“Kassie Barta graduated that year and she went on a school trip to Europe and she brought me back this turtle. It was kind of emotional to have that group of girls that won back-to-back state championships,” Gordon said. “So, I put it in my pocket, and I just started carrying it around every day.”

Fairfield placed second in 2010, but the next season started a run of unmatched dominance. The Eagles put together four consecutive 26-0 seasons and ultimately stretched the win streak to a record 120 games during the 2014-15 season.

During that win streak, on Senior Night in 2013, Jordyn Johnson presented Gordon with another turtle. It joined Barta’s turtle in Gordon’s pocket and hasn’t left since.

The first turtle, the one Taylor gave his dad way back in 2006, has its place in Gordon’s trophy room, a dedicated space in his home in which his wife, Joni, displays memorabilia from a 25-year coaching career. Photos and other memories are rotated in and out of the various displays, but the turtle stays.

“That first one that my son gave me, it sits in the trophy room, as special as any of those trophies that are in there, whatever they are. … It lives in there with the nostalgia,” Gordon said. “That’s the story of the turtles.”

The story is closing the basketball chapter — and what a chapter it was — but the turtles will continue in Gordon’s pocket as he turns the page in his career. He was recently named the new superintendent at Fairfield, where he’ll succeed Les Meyer, who has resigned his post in Fairfield to become the superintendent of schools at Frenchtown.

Gordon has spent the past eight years as Fairfield’s high school principal and past 14 as the Eagles’ girls basketball coach. He compiled 295 wins and just 64 losses during that stretch, coached a number of great players, including eventual NCAA Division I players Chelsea Banis, Jill Barta and three Klinker sisters — Molly, Lizzy and Natalie — and advanced to 10 state tournaments.

Fairfield played in seven consecutive state championship games and nine in a 10-year span from 2008-17. The Eagles won seven titles, the last coming in 2017 when they defeated Malta 34-33 in Billings.

“We talk about that one all the time. … That one in 2017 was very special,” Gordon said. “That was a group of girls and a team and some stuff that came together at the right time, and I used a phrase ‘maybe kind of stole one.’ We gambled on a couple things. We came up with a game plan that wasn’t very pleasant maybe for the fans to watch, but it gave us our one chance to win that game. That was really a special state title, for sure. For sure.”

In total, Gordon won 382 of his 506 total games as a head girls basketball coach, which also included a three-year stint at Sheridan. Between his Chester and Fairfield tenures, Gordon advanced to 13 state tournaments and won 11 trophies.

Beyond the titles and wins, though, he is like most of the other members of Montana’s coaching fraternity. He loves his players and cherishes the relationships he built over the years.

“It’s kind of cool all of the different people around the state that you still stay in touch with and the relationships you have through coaching and athletics,” he said. “That’s never going to go away.”

And neither is Gordon’s love for basketball. While he’s taking a step back and will grant his successor “the autonomy that they deserve,” Gordon will inevitably stick around the game. As long as he’s welcome, he said he would probably help out with summer camps and such, and he’ll still help organize the Gamradt Golf Tournament, which takes place every summer before the Montana Coaches Association’s annual coaches’ clinic.

No matter what his summer schedule looks like, that will be the easy part. The difficulty will be in November when the balls start bouncing to tip off the 2020-21 season.

“It’s been a difficult statement to say out loud that I am not going to be coaching basketball, that’s been difficult,” Gordon said. “There’s going to be parts that I enjoy, the passing of the torch and giving the keys to the car to somebody else and sitting back and watching, but there’s going to be a part, it’s going to be hard.”

But make no mistake, Gordon is looking forward to the new opportunities in his career and time to spend with his family. Joni has been the consummate coach’s wife, compiling detailed records and collecting trophies, while her husband worked long hours.

“She made the comment the other day she can only count three times when she actually got to go to a game and sit with me in the stands. She’s kind of looking forward to having a husband, not being the coach’s wife,” Gordon said. “I’m looking forward to that, too. That’ll be good for us.”

And with that, life will look a lot different for the couple of 28 years.

But they’ll still have their turtles.