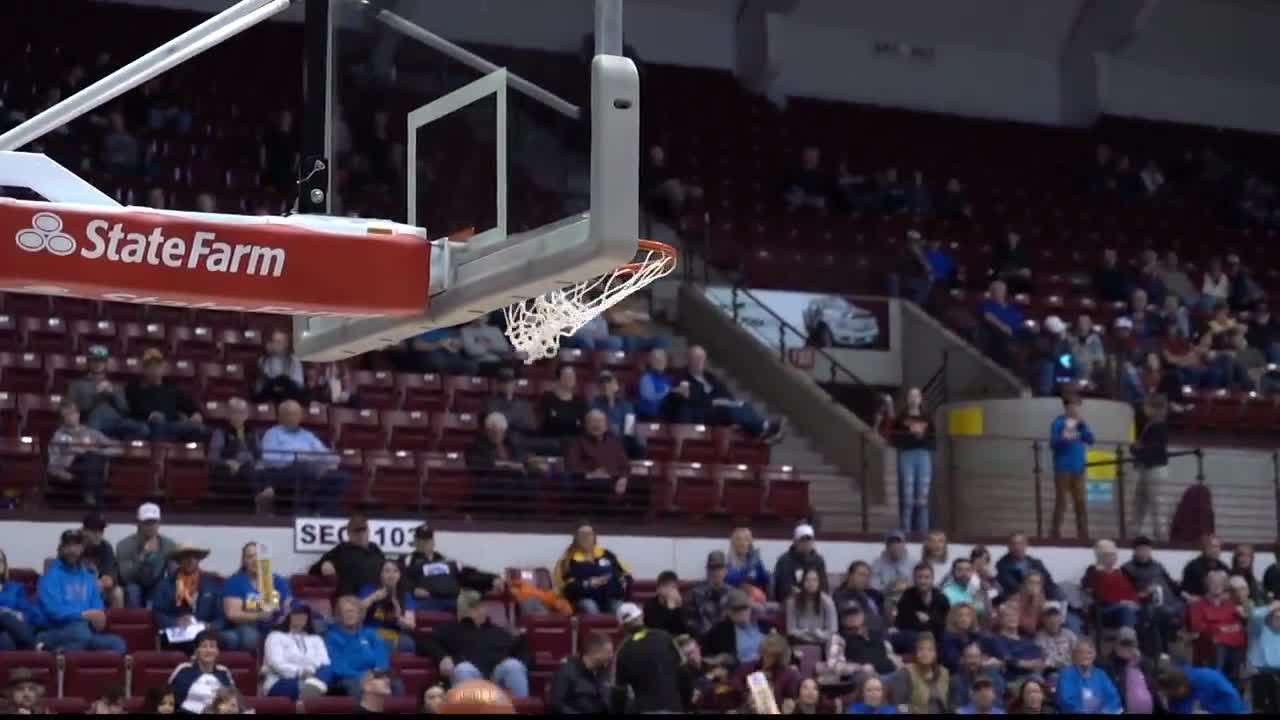 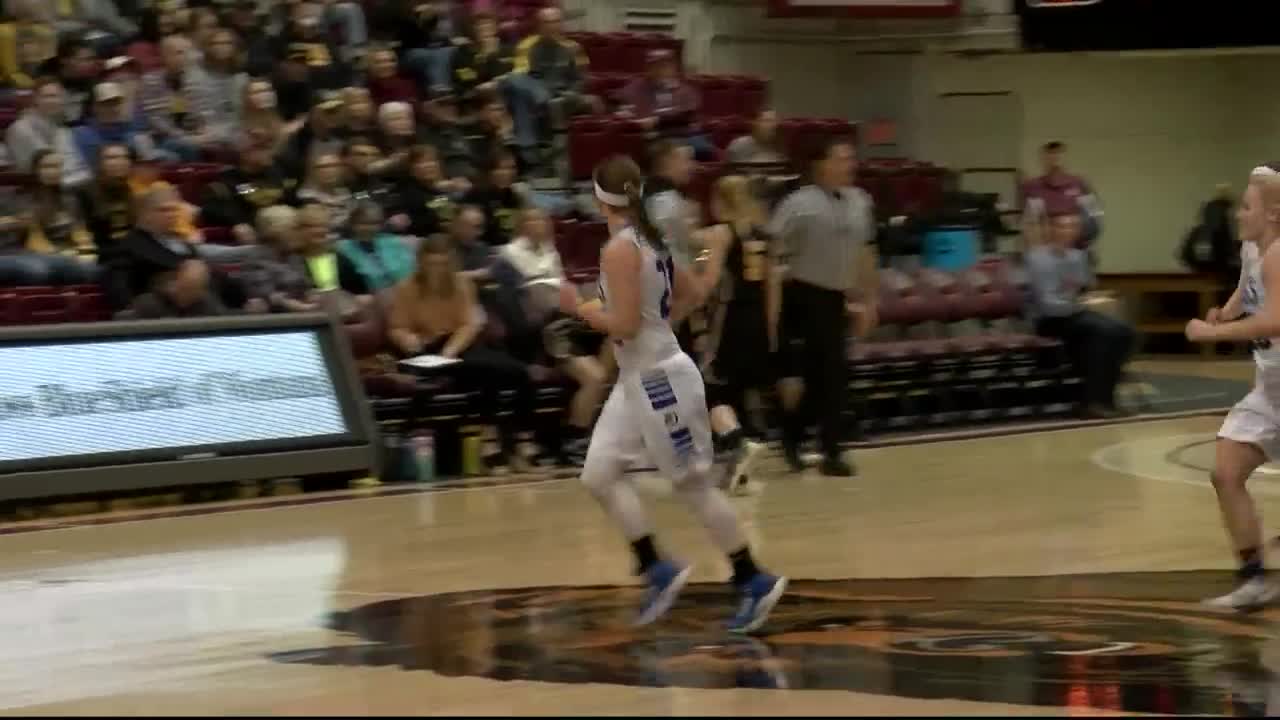 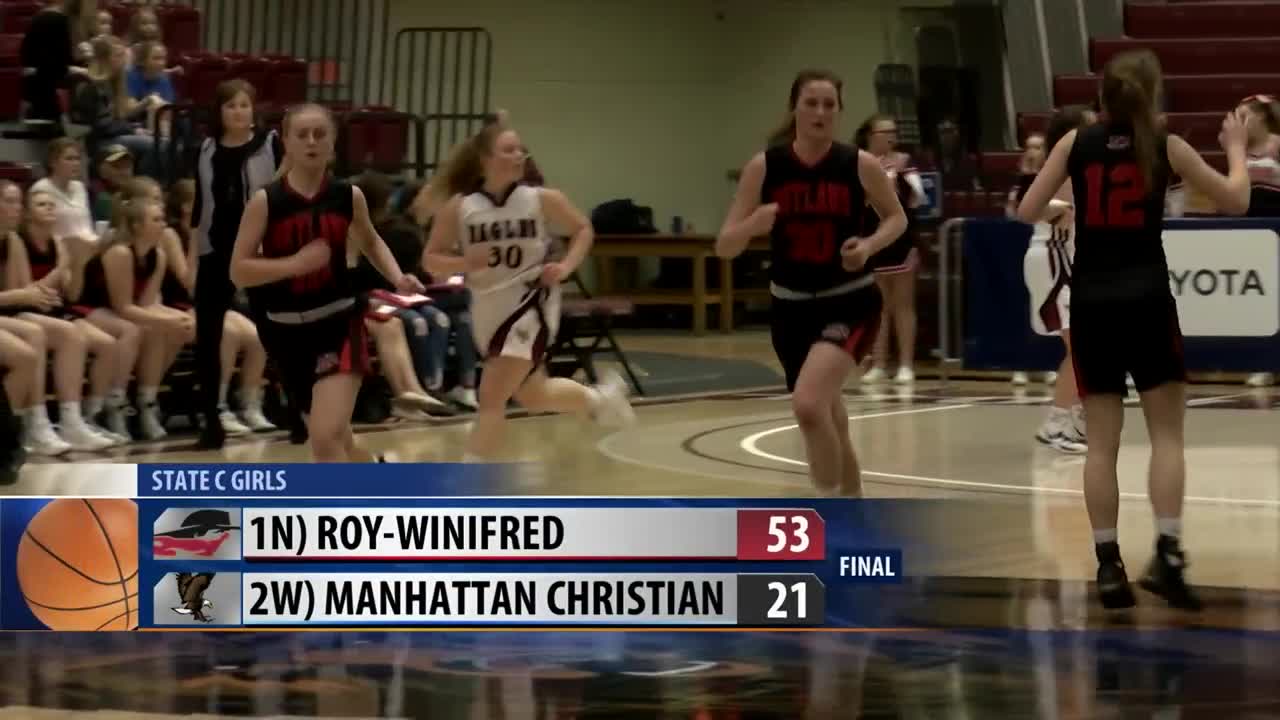 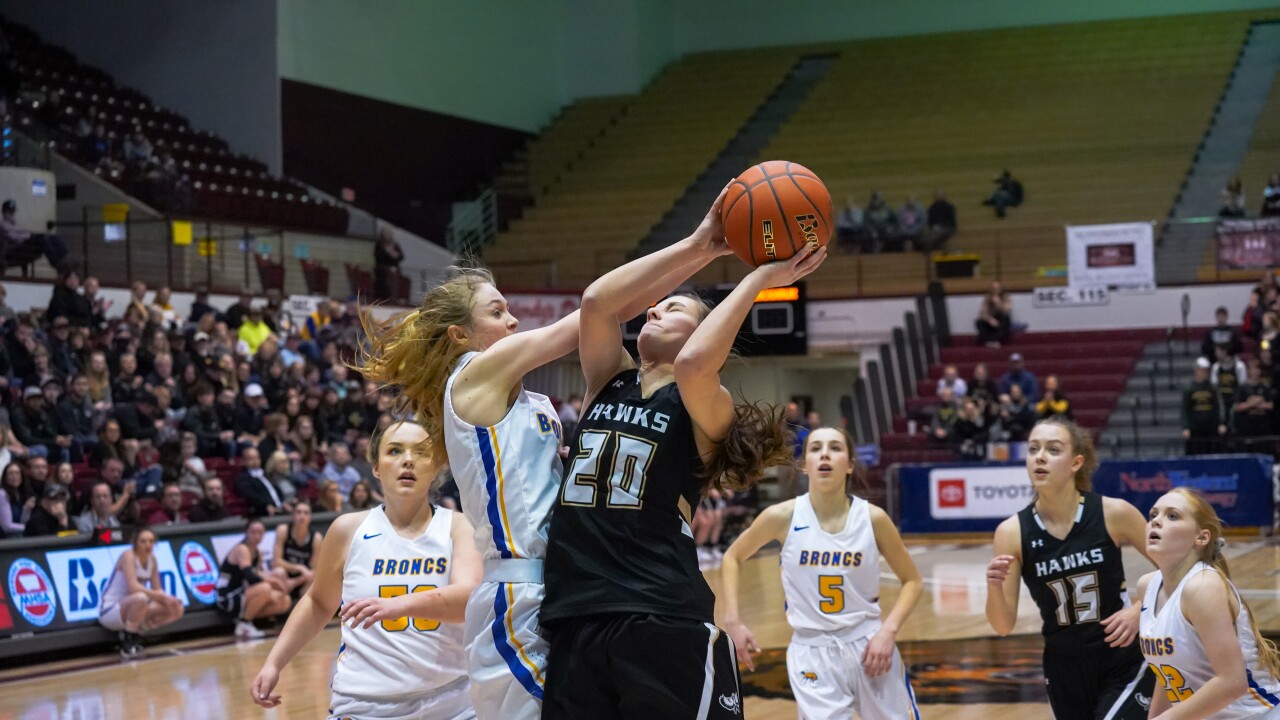 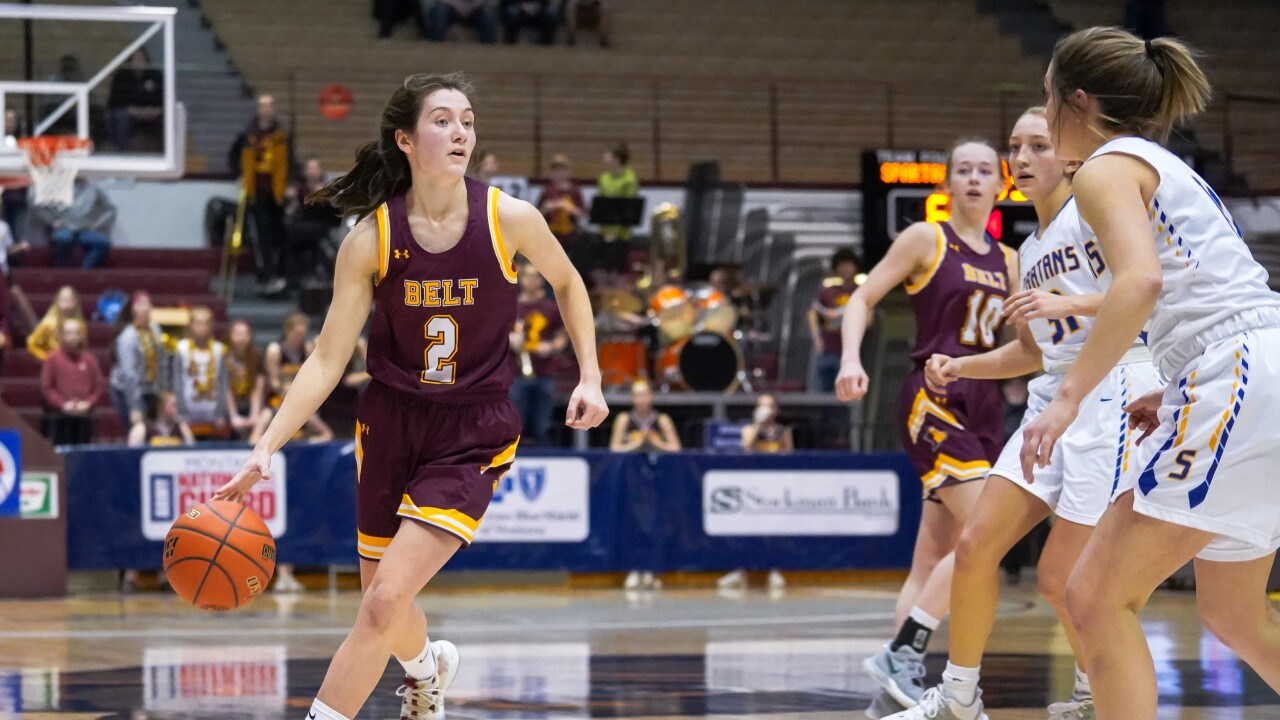 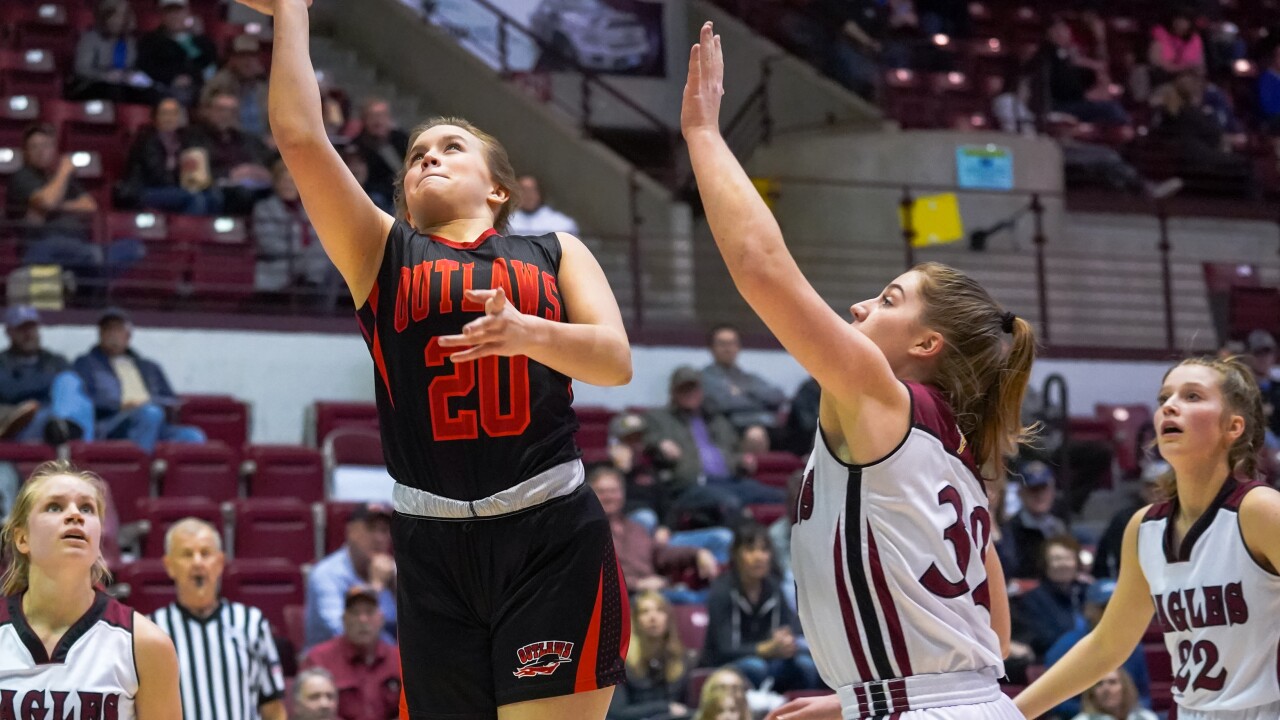 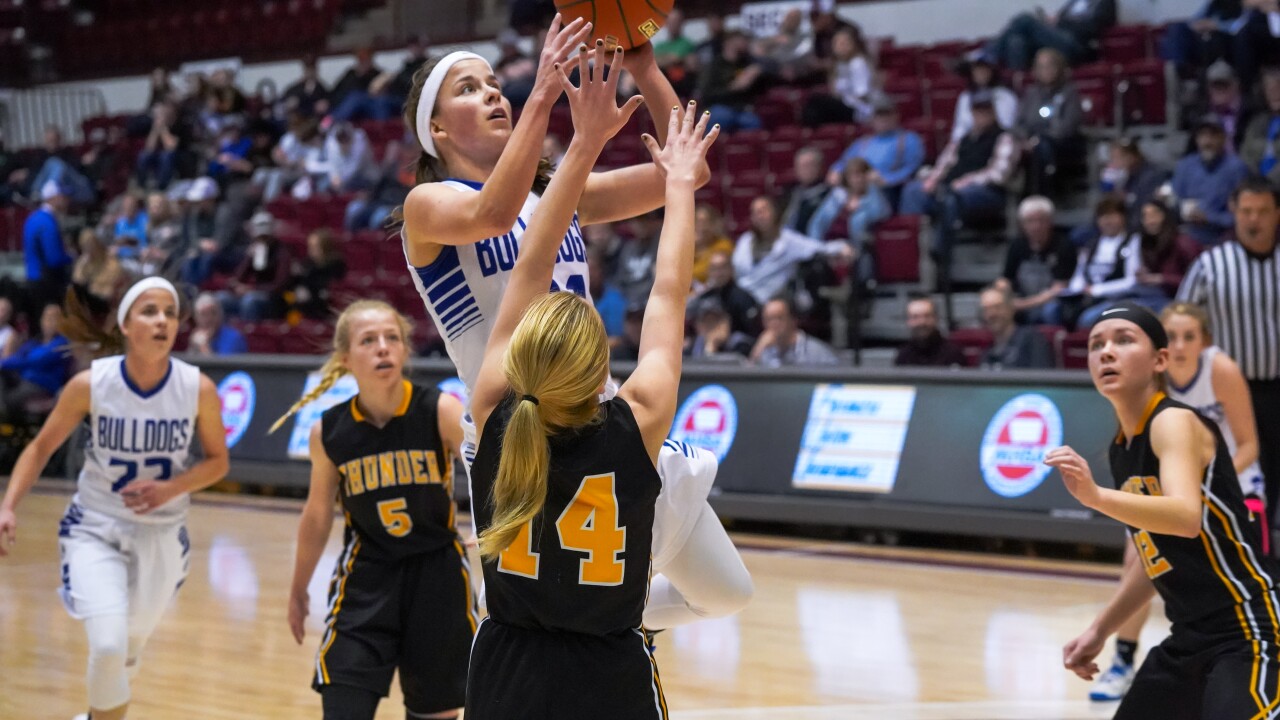 MISSOULA -- Melstone fans rushed to Koye Rindal for a hug, one literally in tears after the Broncs defeated Seeley-Swan 34-26 in the final of four Class C girls basketball state tournament games on Thursday. The embraces were well-deserved.

Rindal, a freshman, hit five second-half 3-pointers and scored a game-high 15 points as the Broncs bullied past the Blackhawks in the second half to advance to the state semifinals.

"Yeah, it was just, I don’t even know. I felt a little bit of pressure, but not too much," said Rindal. "It was great, you know?"

Seeley-Swan used a strong second quarter to build an 11-5 lead at halftime, with neither team shooting particularly well in the opening 16 minutes. The Blackhawks shot just 29 percent, while Melstone was 4-of-23 shooting for 17 percent.

Seeley led by as many as eight in the third quarter, but Rindal quickly caught fire.

The freshman guard hit her first triple from the left wing, then moved to the left corner on the Broncs' next possession, trimming the deficit to four. Standing in front of her own bench barely three minutes later, Rindal hit another 3-pointer, her third of the period, forcing a Blackhawks timeout with their lead sliced to 24-22.

Klaire Kovatch scored two of her eight points to end the period, with Seeley-Swan holding a 26-24 advantage. Kovatch finished with eight points and six rebounds.

But Rindal added another 3 in front of her bench to open the scoring in the fourth, giving Melstone a lead it would never relinquish. She added one final triple, and Melstone's defense didn't allow a single Blackhawks point in the fourth en route to the victory.

"We just got to help and decided to really buckle down on defense," said Rindal. "We love to prove to people that we can do it, we’re not just the underdog."

The Broncs meet Class C power Belt in Friday's 7:30 p.m. semifinal, again as an underdog, but that doesn't faze Rindal and her teammates.

"We just have to play our game," she said.

After a two-year hiatus from the Class C girls basketball state tournament, the Belt girls are back in the semifinals.

"It feels good. It’s been a long time, it feels like forever," said Pimperton. "It feels good. Coach (Jeff) Graham came in yelling, he’s excited. He brings the energy to the team."

Belt had appeared in eight consecutive state tournaments, winning titles from 2012-14 and 2016-17, before missing out on the final weekend the past two years. Northern C rival Box Elder won the past two Class C championships.

But the Huskies were motivated to return to the state bracket this winter and were able to pull away from the Spartans in the third quarter to secure the win.

"It’s really good. Graham is always really well-prepared, so having him prepared really helps us. He yells a lot," Pimperton laughed. "But he just tells us we need to slow it down and get our shots. That team sped us up a little bit, but we got back into it and played our game."

Trailing 13-6 after the opening quarter, Scobey sparked a run in the second behind Gracee Lekvold's seven points in the period. She finished with a game-high 14 on 5-of-10 shooting.

But Belt flustered Scobey all-state guard Kortney Nelson, limiting her to 3-of-11 shooting for eight hard-earned points and 10 rebounds.

"Our game-plan was really to stop Kortney (Nelson) and Gracee (Lekvold). Kortney is a really good player, she’s really aggressive and can kill teams with her little jumper that she has," Pimperton said. "The plan was to help in the gaps and do as much as we can to not let her score."

Nelson and Lekvold were the only Spartans to score in the third quarter -- Nelson scoring the first point on a free throw to break an 18-all tie, and Lekvold knocking down a jumper to tie the game at 21-21 minutes later. The rest of the period belonged to Belt, which out-scored the Spartans 10-3 to create the separation that lasted the remainder of the game.

Brooke Schraner banked in a 3-point attempt from straight-away, and Lindsey and Shelby Paulson added key points to give the Huskies a 28-21 lead going into the fourth.

"We all really trust each other now. At the beginning of the year we were maybe kind of timid, but now we all know we can make plays, every one of us can," said Pimperton.

"Coach Graham has a lot of film for us to watch (Thursday night), so (it’s going to be a late night), yeah," Pimperton said.

Dyuani Boyce had 16 points and grabbed 13 rebounds, Madeline Heggem added 10 points and four blocks, and the Roy-Winifred Outlaws advanced to the Class C state basketball semifinals for the second consecutive year after Thursday's 53-21 win over Manhattan Christian at Dahlberg Arena.

"We didn’t really know what to expect, but we thought we would come play our game, come out, and it was kind of cool that it did (get lopsided down the stretch)," Boyce said after the win.

The game was never in doubt for the Outlaws, who fell in the Class C title game to Box Elder last winter. Roy-Winifred jumped to an 11-2 lead after the first quarter and held a 27-7 lead at halftime. The Outlaws held the Eagles to just 2-of-16 shooting in the first half, while also forcing six turnovers.

"We’re just very scrappy and we like to, we always say defense creates our offense, so we like to come out and play hard defense all the time," Boyce said.

Boyce made 8 of her 11 shots in the win, as the Outlaws were 21-of-51 shooting and a respectable 3-of-9 shooting from downtown. Manhattan Christian, on the other hand, was 1 for 17 beyond the arc.

"It is very important to knock down the easy, third-grade shots, is what we call them because they’re easy buckets," said Boyce. "If people start keying on us bigs, we kick it out to our shooters and they can hit them."

The win advances the Outlaws to Friday's 6 p.m. semifinal against Ekalaka, which rallied past Westby-Grenora in overtime in the opening game of the girls tournament. Boyce says she watched the Bulldogs and was impressed with their hustle and shooting ability, despite a significant lack of size.

"They’re very scrappy so we need to keep our composure. I think we have enough bigs that I don’t know if they can double-team all of us. I guess we’ll see," she said. "Respect all, fear none. We have to, no matter what, play how we know how to and don’t overlook anyone. You never know what happens in the tournaments."

Manhattan Christian, which will face Westby-Grenora at 9:30 a.m. Friday morning, was led by Eliana Kuperus' seven points in the loss.

Heather, Hannah and Heidi LaBree combined for 48 points as Ekalaka defeated Westby-Grenora 70-59 in overtime in the opening game of the Class C girls basketball state tournament.

"For a small town it’s very exciting, especially coming all the way across the state," Heather LaBree said. "We kept fighting, kept going at them. We have to keep going at the basket or dish it off for the 3, if we don’t we get stuck. The girls fought really hard and we pulled it off."

Ekalaka out-scored the Thunder 13-2 in overtime, an opportunity the Bulldogs nearly didn't receive after Jenna Rust's shot near the end of regulation was off the mark. The Bulldogs got the ball back with seconds remaining, but never got a shot off.

But the extra minutes belonged to the Bulldogs, with Heidi LaBree scoring five points in the frame. She was forced into the starting lineup for the state tournament after a former Ekalaka starter suffered a leg injury at the divisional tournament.

"Huge. All of our freshmen are insane. They are so competitive, sometimes we fight in practice because they are so competitive," laughed Heather LaBree. "They step up a lot and help us get better, we help them get better. They are amazing, always going at it. They don’t care, freshmen, underdogs, they’re going as hard as they can to do whatever they can, so it’s crucial that they’re there."

After Westby-Grenora started the game on a 4-0 run, all from Rust, the all-state center, Hannah LaBree led a charge that eventually saw the Bulldogs steal the lead after the first quarter. Whitney Kittelmann hit a 3-pointer to cap the scoring at 17-14 in the period.

Heather LaBree and Kenzie Tooke scored Ekalaka's first seven points in the second to extend the lead to nine, 24-15, and Whitney Kittelmann's 3, paired with Hannah and Heather LaBree's final four points of the half pushed the lead to 31-21 at halftime. The Bulldogs outscored the Thunder 14-7 in the quarter and held Westby-Grenora to 9-of-31 shooting in the half. The Bulldogs made four 3s and scored handily in transition.

"Almost everyone on our team is a pretty good dribbler, so we can get it to anyone and feel comfortable — go to the rim, pass it off, pass it back to you or you go to the rim. It’s a fun time," said Heather LaBree.

Following a tight third period, the Thunder chipped away at the lead, led by key 3-pointers from Brynn Folvag and Elizabeth Field. Field's second triple with just less than 2:30 to play cut the lead to 50-48, then Folvag tied the game on a long jumpshot moments later. Her fourth of five 3s put the Thunder ahead 53-52 as the teams traded blows in the final two minutes. There were three lead changes in the final 1:55 of the contest.

Folvag's final 3-pointer tied the game with less than 30 seconds to play and Ekalaka missed a 3-point attempt with 16 seconds to play to give the ball back to the Thunder, but Rust couldn't convert inside, sending the game to overtime.

Rust finished with 12 points and 16 rebounds.

"Defensive plan was to either have one person on her front side and have the help side step over and go back side if needed or to double-team her," Heather LaBree said of Rust. "We are pretty used to playing tall girls, not that there are a lot of tall girls in our conference, but we are pretty short. We’ve maybe had a girl that was 5-foot-8, but never anyone 6-foot. We have to learn to compromise for our size."

Folvag had a game-high 21 points, while Field added 17 in the loss.