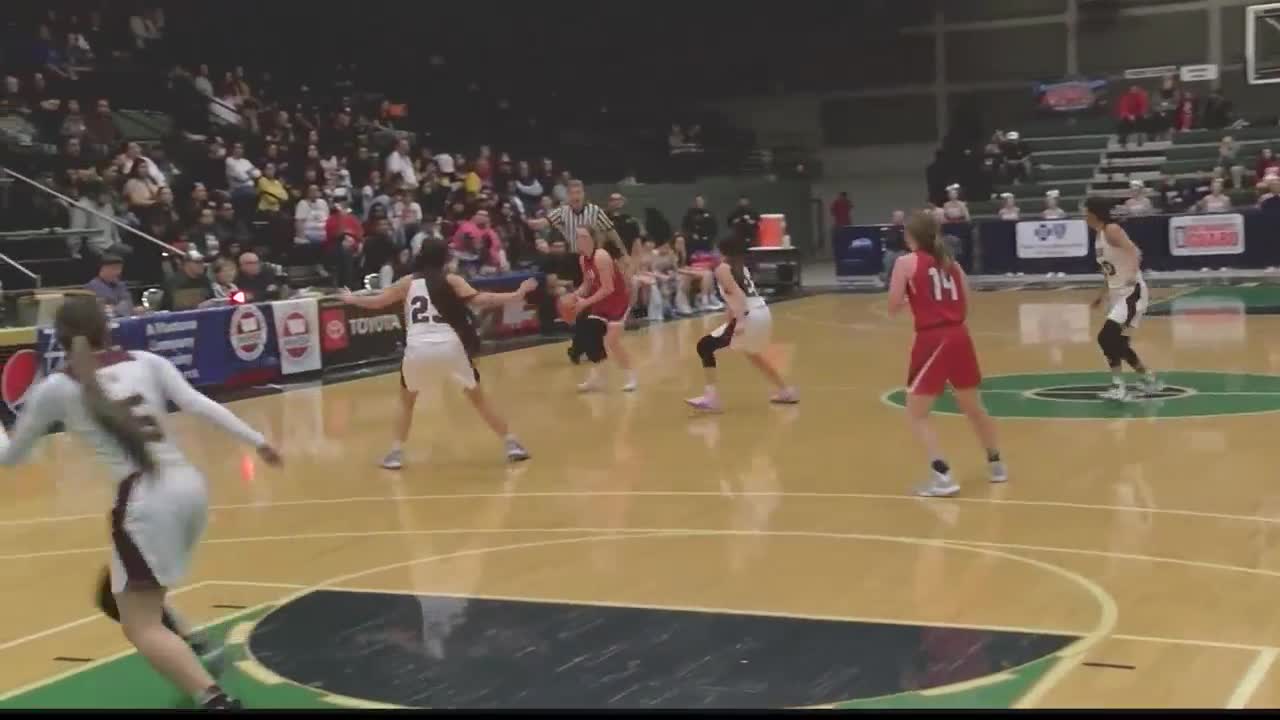 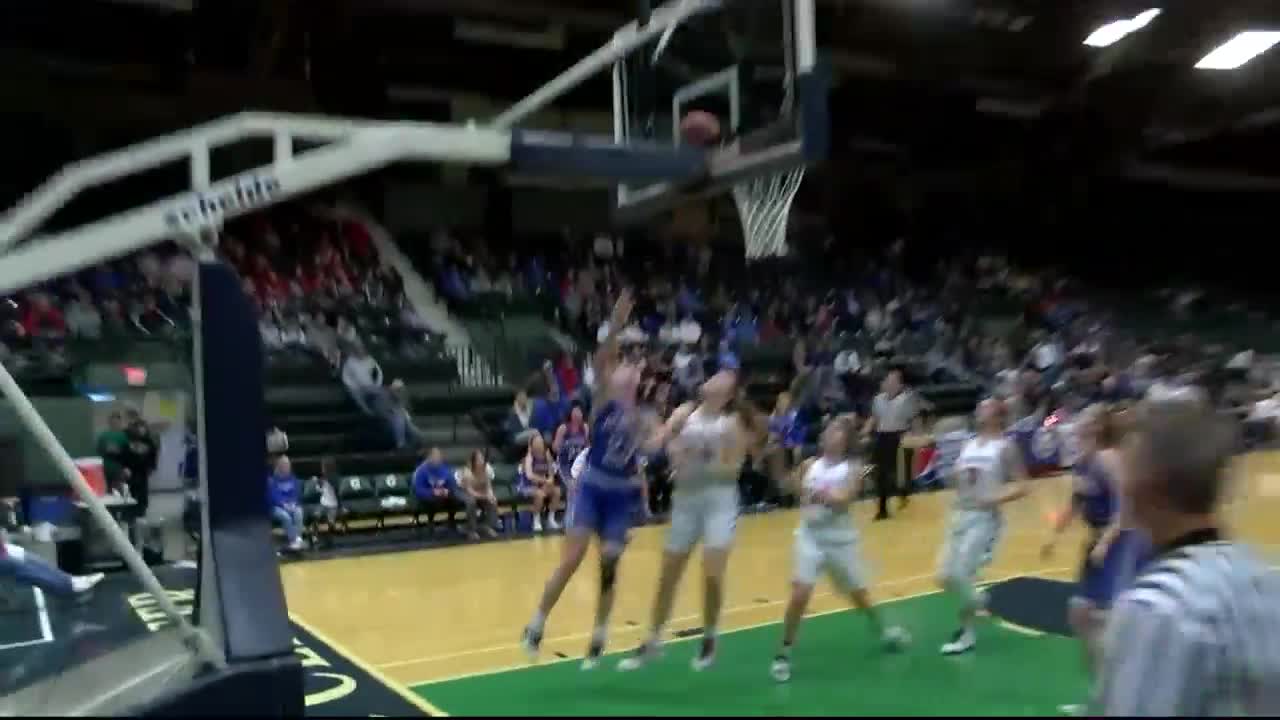 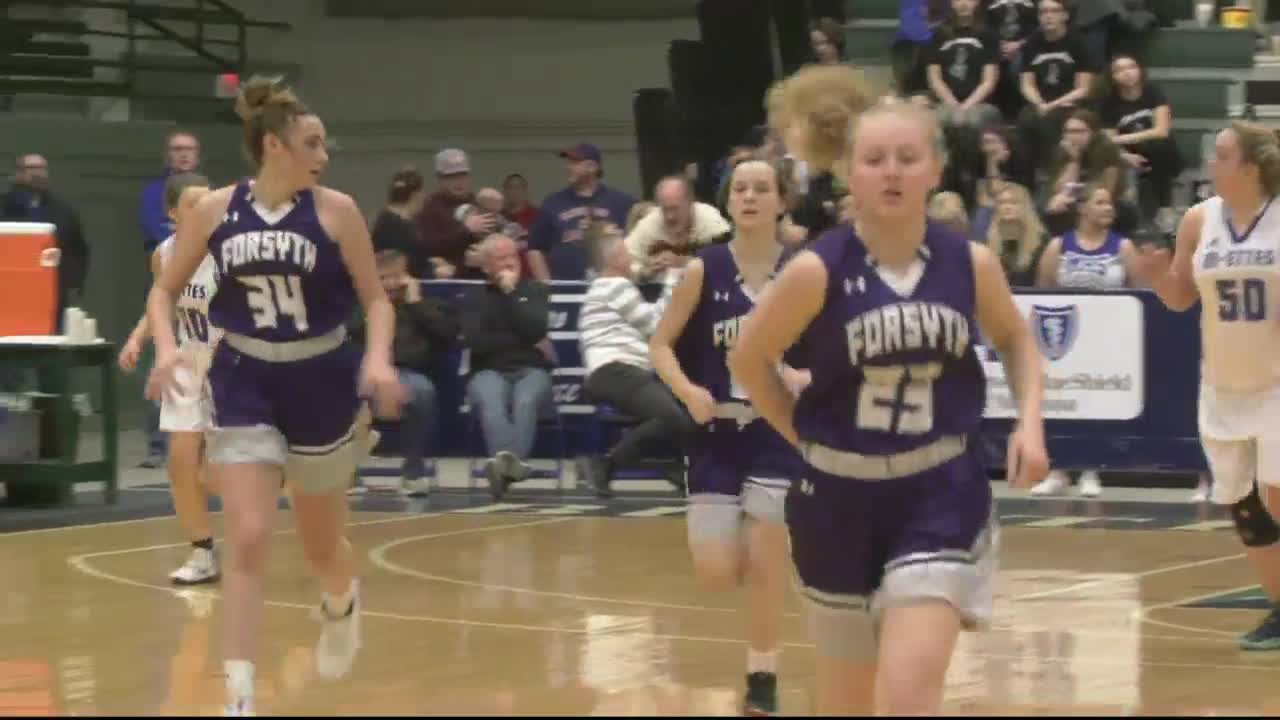 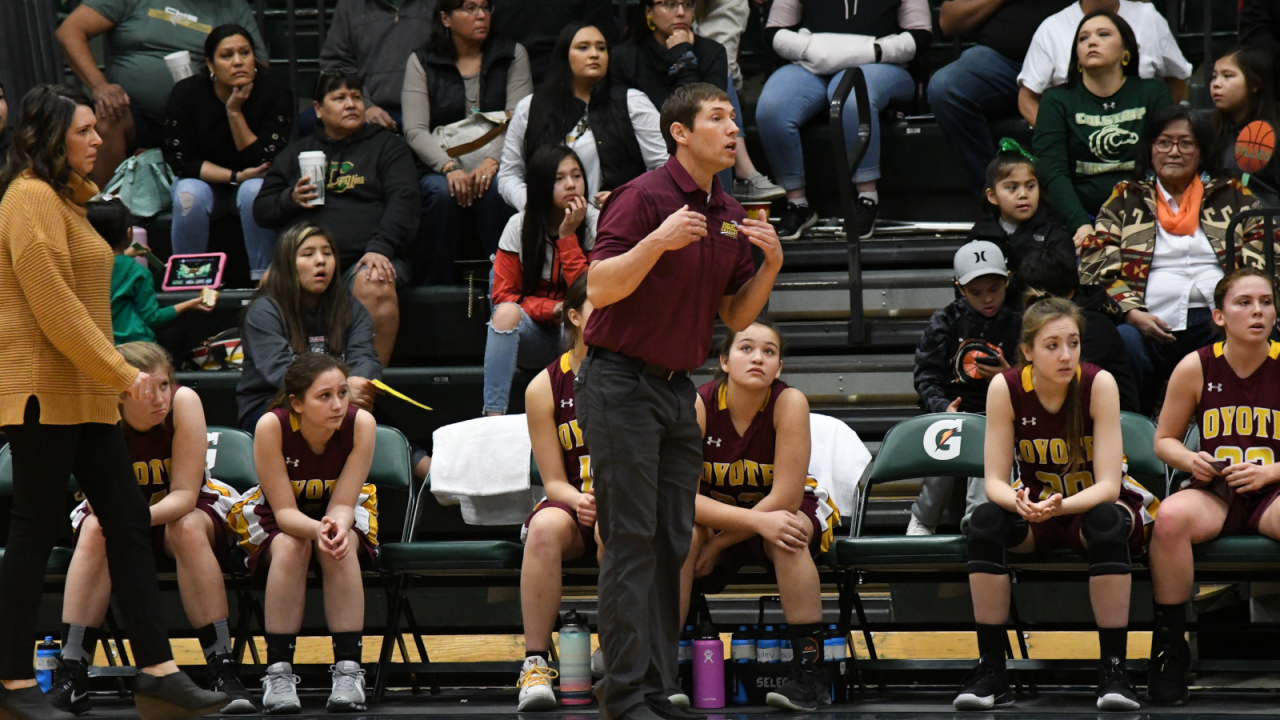 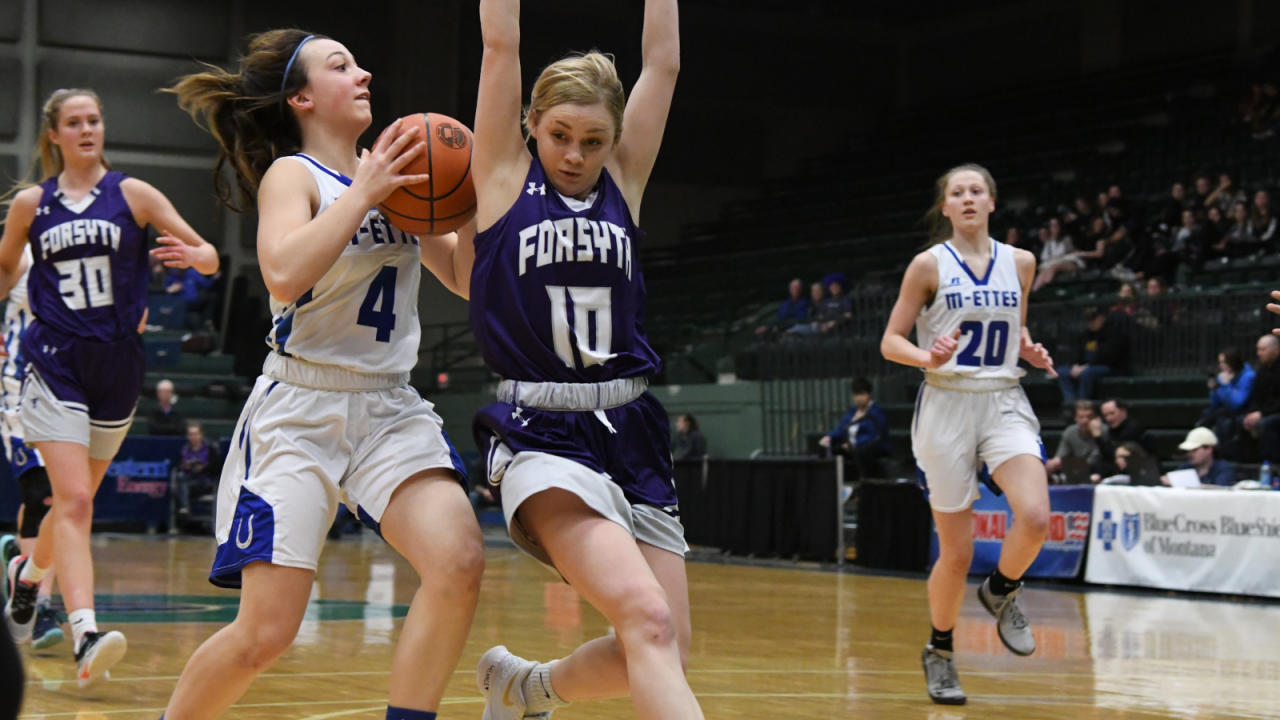 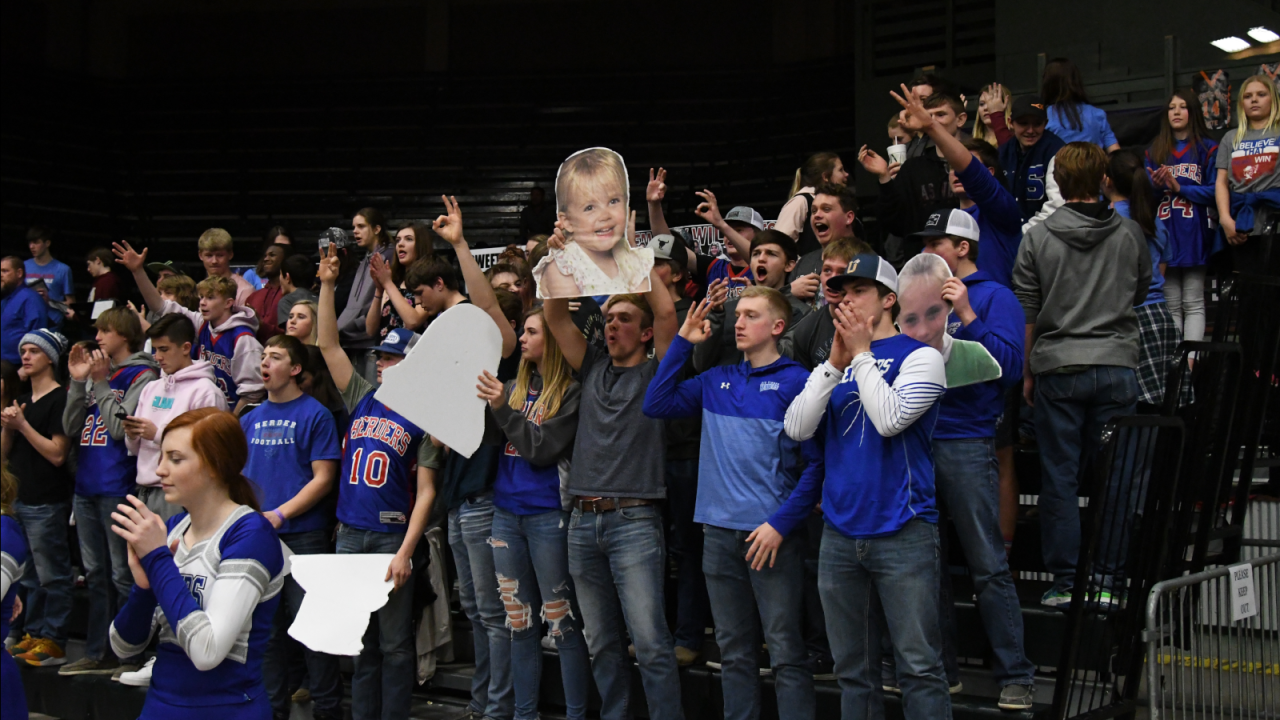 BUTTE -- Big Timber is right back on track.

The Sheepherders, coming off their first loss of the season in last weekend's Southern B title game, took out their frustrations on Bigfork in the opening round of the State B girls basketball tournament in Butte on Thursday, defeating the Valkyries 47-35.

"In hindsight it was kind of good that we lost. We were feeling a little pressure being undefeated," Big Timber head coach Kim Finn said. "We went back to the basics. We were getting out of our fast-break game, so we said we were going to start pushing the ball a little bit, having fun and not worrying about anything. We made it to state, we're just going to play and have a good time."

The Big Timber offense got off to a slow start after freshman point guard Bailey Finn picked up two fouls less than two minutes into the game, but the Herders still managed to hold a 9-8 lead after the first quarter.

The Herders really turned it on in the second quarter. Big Timber outscored Bigfork 16-5 in the frame to lead by 12 at the break. Finn had all 11 of her first-half points in the second quarter, including a pair of 3-pointers that seemed to deflate any Bigfork momentum.

"We need an inside game as much as we have an outside game, and (Thursday) we had both. Making our 3s, we focus on shooting a lot because if we make our outside shots, our 3s, it opens up our inside. It's just been something we focus on all year. We have several good 3-point shooters and it seems they step up in big games," Kim Finn said.

Bigfork fell behind by as many as 16 points in the third quarter, but the Valkyries closed the quarter on a 7-0 run over the final 1:31 of the third to cut Big Timber's advantage to 31-22 entering the final eight minutes.

The Valkyries hung around for most of the fourth quarter, but Big Timber wouldn't let Bigfork get closer than eight over the final frame. The Herders saw their lead balloon to 16 multiple times in the fourth quarter before closing with the 12-point win.

"Some of the girls are a little tired, so just a little rest," Kim Finn said of everyone playing. "Just letting everybody know they're an important part of the team and getting everybody involved was my plan."

"We just know we have to stop (Lindsey) Hein. Control her a little bit. If we can control her then we'll win the game," Kim Finn said.

Forsyth got a monster performance from 6-foot-6 junior post Lindsey Hein when the Dogies needed it most.

Hein poured in 20 points and grabbed nine rebounds to lead the Dogies to a 45-41 win over Malta in the opening round of the State B girls basketball tournament inside the Butte Civic Center on Thursday.

Forsyth led for the majority of the first half and held a 23-20 advantage as the teams went to the locker room. Malta would come back to make it 33-all headed into the fourth quarter.

Then the Dogies finally got some distance. A triple by Haley Vance and two Hein baskets gave Forsyth a 42-37 lead with just more than two minutes to play. That was just enough breathing room down the stretch.

"I think mentally (the lead) was good for them. We had never seen Malta before. Mentally for me, though, on our defensive end they were able to split us and kind of divide (Hein) from top to bottom, so I didn't like that. As far as everything else goes it was good," Pinkerton said. "Their guards are really quick and really attack when they come off a pick. We were trying to create something where we were switching or hedging."

The Dogies would ice the game at the foul line, hitting 3 of 4 attempts in the final 21 seconds to build a six-point lead in the closing moments.

Hein was joined in double figures by Jordan Cookman, who finished with 13 points on a perfect 4-for-4 from the field with three 3-pointers. Freshman Allison Kunze led Malta with 12 points. Kelbee Denham had 10.

Forsyth is in to Friday's semifinal round where it will meet Big Timber.

"We feel like we've got more that we could offer against Big Timber and we'd like to see them again," Pinkerton said.

It wasn't easy, but Missoula Loyola kept its unbeaten record intact to move on to the State B semifinals.

The Breakers outlasted Harlem in the opening round of the State B girls basketball tournament for a 56-51 win to advance to Friday's semifinal round against Shelby.

"Fortunately we were able to turn the tide a little bit in the second half and get just enough of a run together and knock free throws down down the stretch. Made the plays when we needed to," Missoula Loyola head coach Travis Walker said.

Loyola trailed for much of the game, but the Breakers finally were able to take a lead midway through the fourth quarter on a pair of buckets by sophomore Lani Walker. Each time Loyola got a lead, though, Harlem would come storming back.

With a six-point lead with less than a minute and a half to play, Loyola had the breathing room it wanted. Harlem's L'Tia Lawrence, though, had other ideas. She buried an NBA-range 3-pointer to pull Harlem within 51-48.

After Sam Clevenger split a pair of free throws for Loyola to give the Breakers a four-point lead, Lawrence again knocked down a 3-pointer from way beyond the arc to make it a one-score game.

"Coach Lawrence, he does a great job. He had them ready to go. His daughter L'Tia is a very special player. Every time we got a two-, three-possession lead, thinking we're going to get one stop and be OK, she'd come down and hit another 25-footer. It's like, 'Oh, my gosh.' We're defending it as best we can and she's knocking them down, which is part of the game," Travis Walker said.

Walker buried two free throws with 23.5 seconds left to put Loyola up 54-51. Harlem's Kristyn Kittson then missed the front end of a one-and-one, but she grabbed her own rebound. Another missed shot and another offensive rebound gave Harlem one last chance, but the Wildcats turned the ball over with less than three seconds to play to seal the game.

Clevenger had a 15-point, 10-rebound double-double for Loyola. Walker had a team-high 17 points and Syd Koppang added 16. Lawrence had 20 points and seven rebounds for Harlem. Taya Trottier had 18 for the Wildcats.

Missoula Loyola will meet Shelby in the semifinals. The two haven't played this year but were at the Shelby Coyote Classic tournament together back in December.

"This year was the first year in the last three or four years that we haven't played Shelby at the Coyote Classic, but we did watch them. I'm really impressed with what they've done. The Underdal girl, she's a great talent," Travis Walker said. "They've got a guard (Brogan McAllister), she can flat out shoot the ball. They're well-balanced and another well-coached team. It'll be a fun game and hopefully we'll have another one in us after that one."

Shelby hadn't been to the State B girls basketball tournament since 1997, but the Coyotes are moving on to the semifinals of the 2020 State B tournament after a 40-35 opening-round win over Colstrip at the Butte Civic Center on Thursday morning.

"The defensive intensity picked up. I thought our bench play was great," Shelby head coach Ryan McDermott said. "Then it just kind of flipped. We got every rebound, every loose ball went our way. Sometimes the end of games just turn out that way. Colstrip is a really good team."

Shelby and Colstrip entered the fourth quarter knotted at 28-all, until Brogan McAllister buried a left-wing 3-pointer to give Shelby a 31-28 lead that it wouldn't relinquish.

Colstrip struggled mightily from the field in the fourth quarter and shot just 4 of 18 in the second half. The Fillies broke through on a triple by Baily Egan to trim the Shelby lead to 33-31, but free throws by Madison Underdal and a layup by McAllister pushed the Coyotes' lead back to 37-31 with a minute to play.

"Brogan has done that all year. She seems to just be really timely with her 3-pointers, and she's shooting 40 percent on the season from 3. She's almost just too unselfish," McDermott said. "She doesn't look for it enough, just because Bailey (Johnson) and Maddison (Underdal) are so good in the paint, but when she gets that look she's deadly. She knocked that down and the whole place kind of went crazy."

Shelby felt the momentum begin to turn at the end of the first half. Colstrip led 20-14 in the closing seconds of the second quarter, but Shelby's Brook Luly got a steal and drove the length of the floor and hit a left-handed layup as the horn sounded.

The Coyotes carried that into the second half, quickly tying the game at 20. The two sides then traded scores back and forth throughout the remainder of the third quarter until McAllister's triple finally put Shelby over the hump.

Shelby moves on to Friday's semifinals where it will face Missoula Loyola.

"Anything can happen at state, so I told them one of the teams here is going to go 3-0. Why is it not us? You have to start thinking that positive thinking and get your mind in that train of thought," McDermott said. "I told them (Wednesday) night in shoot-around that this is the greatest opportunity that we have. It's set up for us. We know what Loyola does, we know what Harlem does, but we've got to get past Colstrip. They kind of locked in at shoot-around (Wednesday)."