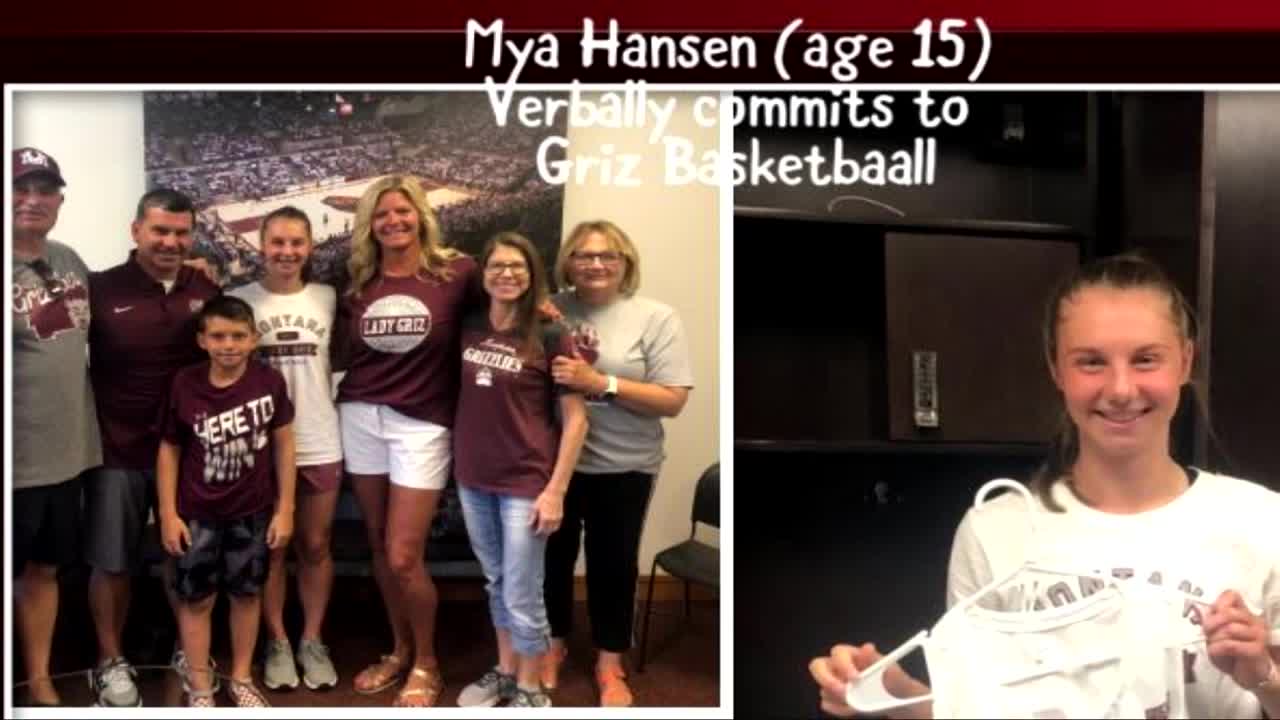 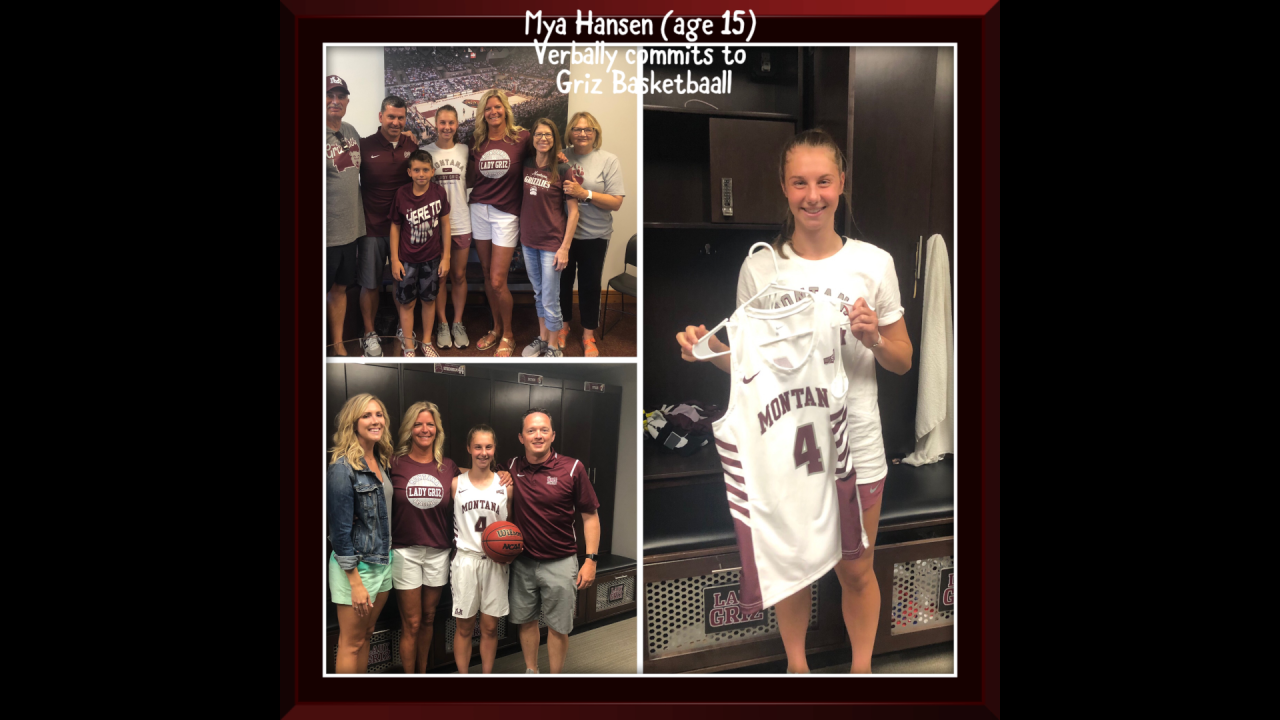 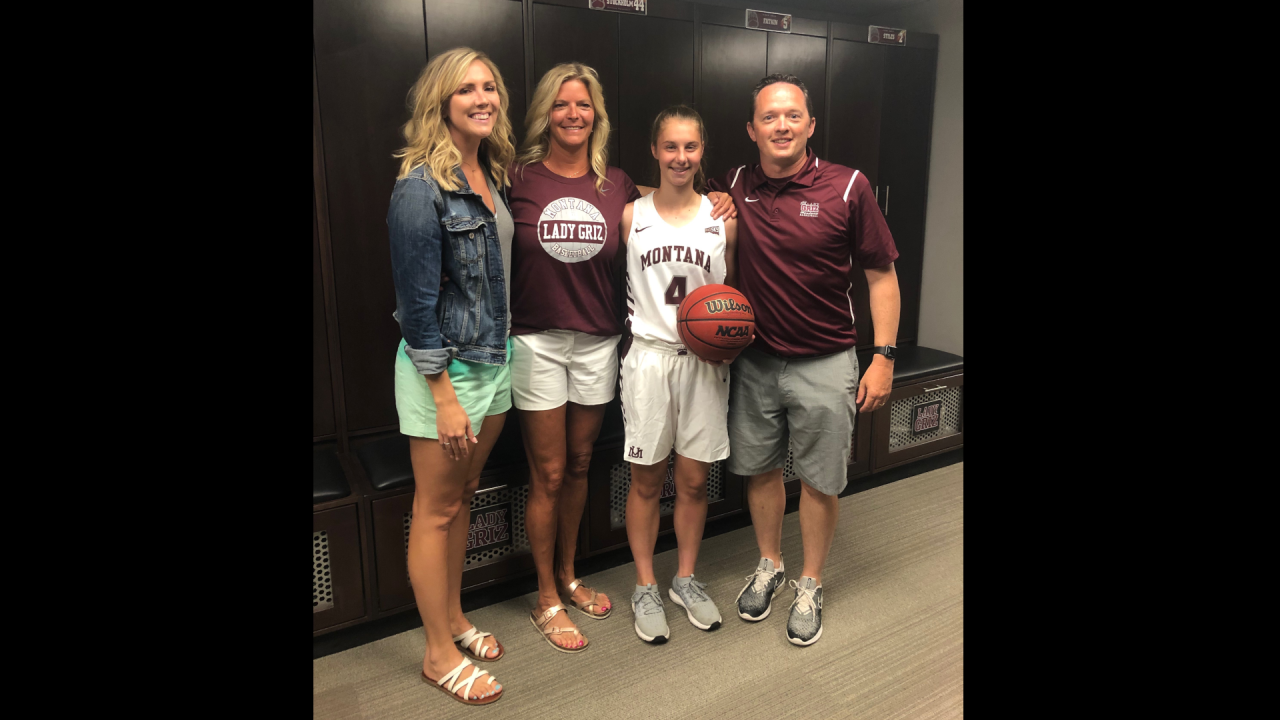 MISSOULA -- Mya Hansen hasn’t started her sophomore year of high school but on Tuesday accepted a scholarship to play for the University of Montana women’s basketball program, her father Pat confirmed to MTN Sports.

And she celebrated by sharing a bottomless root beer float with her younger brother at Baskin Robbins in Missoula.

"I didn't really know what to expect walking onto campus and into their office, since I've never done anything like this, and it's just an amazing school to be at, especially in Montana," Hansen told MTN Sports by phone. "If you go to their games, you see how big of a crowd they have. It's a very supportive community and I'd just love to be part of that."

Hansen was a freshman last season for the Laurel Locomotives, earning all-conference and all-state honors while averaging a team-high 13.4 points per game during the regular season. She also led the team in rebounds, assists and steals.

The 15-year-old is (unofficially) believed to be the youngest athlete ever offered a scholarship by the Lady Griz basketball program, according to Pat Hansen who said coaches informally couldn't recall anyone younger.

"I've been always thinking about committing there early. It's just awesome to know that I can go into the rest of my years of high school and just play basketball, the thing I want to do," Mya Hansen said.

“It was an extremely tough decision,” Pat Hansen said. “She had it narrowed down to Montana and MSU Billings. She loves (MSUB head coach) Kevin Woodin. It's funny, because when she talked about the college basketball coaches that she'd grown up watching, the only schools that really came to mind were Robin Selvig and Shannon at Montana, and Kevin at MSU Billings in terms of longevity."

Laurel won last year’s Eastern A regular-season championship and finished fourth at the super-divisional tournament. The Locomotives advanced to the Class A state tournament semifinals before losing to eventual state champion Havre. Laurel finished with an overall 18-8 record.

Hansen played for her father last season who took over the girls head coaching job at Laurel while maintaining the same position with Laurel’s boys. He had been the boys head coach for 14 years winning one State A championship. Pat Hansen stepped down as head coach of both teams after the 2018-19 campaign.

Hansen has since transferred to Billings Central, where she’ll begin her sophomore season this fall. She intends to play soccer and basketball for the Rams.

Hansen and her family drove to Missoula early Tuesday morning to meet with head coach Shannon Schweyen and the women's staff. It was during that meeting that Hansen announced her verbal commitment.

"It's cool to see that, when I watch them (Lady Griz) play, that I will be part of that, because as I was growing up, I was always like, 'Wow, I really want to play college,' and just how well-known those college players are, it's cool to think that will be me up there one day," Mya Hansen said.