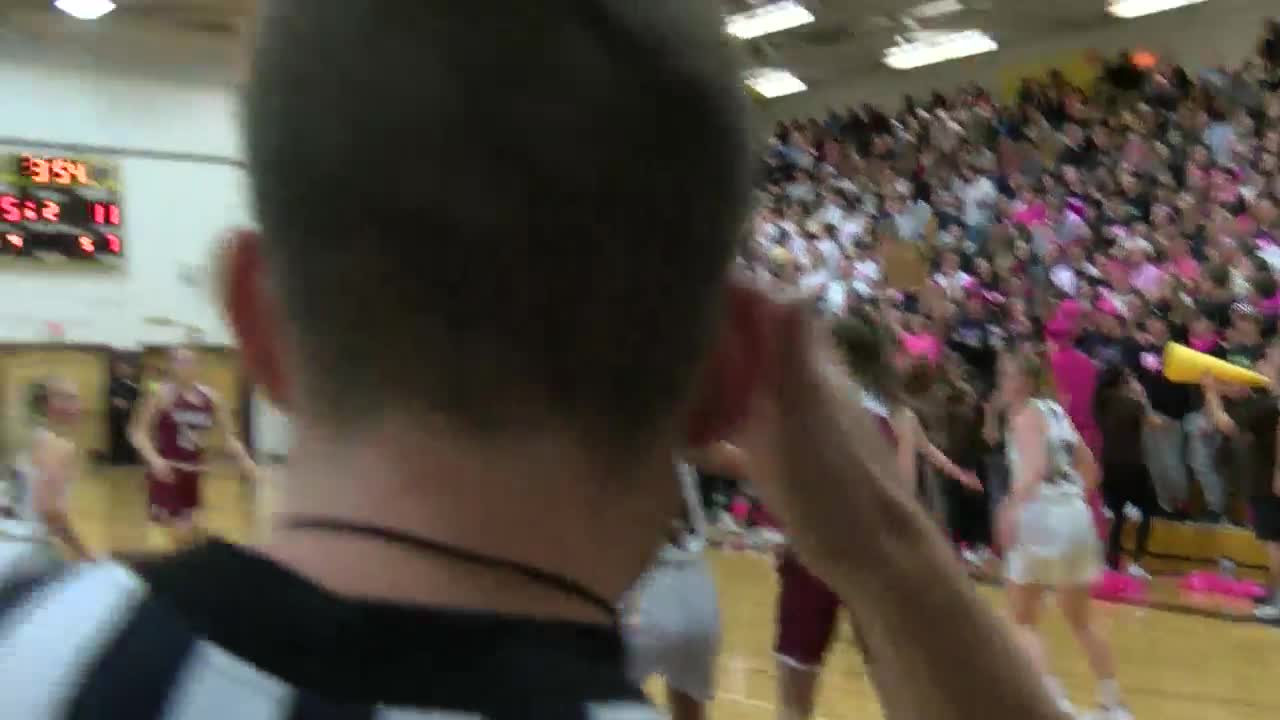 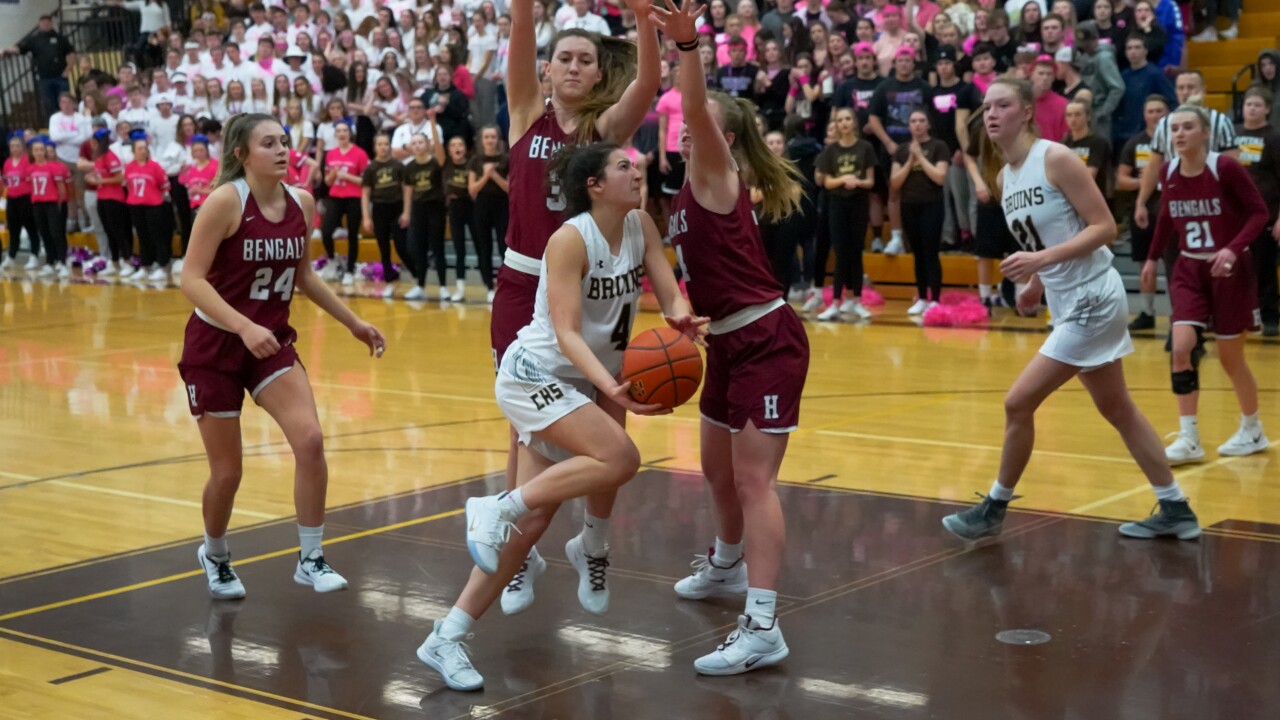 The top-ranked, unbeaten Bruins rallied past the Bengals 39-34 in overtime on Thursday night, moving to 8-0 on the season. But it wasn't without its challenges.

Mashayla O'Malley gave the Bruins their first lead of the game moments into overtime, driving by Bengal defenders for a layup on the left block. She helped seal the game with the final of her five steals, sinking a pair of free throws, the second bouncing high off the back of the iron and swishing back through the nylon below.

O'Malley finished 7-of-9 from the free throw line, scoring 14 points to go with seven rebounds and five steals. She also had two assists in the win.

"(Capital head coach Katie Garcin-Forba) had confidence in me, which makes me personally get confidence, because once you know your coach has confidence in you, that gives you the green light and you know you can do your thing and score," said O'Malley. "She gave me confidence, and then I could not lose that game. I would not be sleeping. I just told myself, ‘We’re winning this game.’ Once those free throws dropped and we went into overtime, I was like, ‘We’re winning.’”

Capital's undefeated season appeared to be in jeopardy with less than a minute remaining in regulation. After rallying from 10 points down to tie the game at 28-all, the Bruins watched as Helena standout McKayla Kloker buried a 3-pointer from the left wing after a timeout, putting the Bengals ahead 31-28 with 37.9 seconds remaining.

"McKayla is just a great shooter and she’s one of the few ones out there where, I don’t know if she feels the pressure, necessarily. She just loves the game, she’s ready to shoot at any point. We trust the ball in her hands in that situation,” said Helena head coach Eric Peterson.

“She’s a stud," O'Malley added of her crosstown rival. "That’s a lot of pressure on her, and not a lot of people could have done that. Props to her.”

Paige Bartsch was fouled on the other end, hitting one of her two free throws, but the Bruins grabbed the offensive rebound, where O'Malley was fouled and calmly sank both free throws in the double bonus to again tie the game. Helena High never got a shot off in the final 7.3 seconds.

"No doubt in my mind. No doubt since the beginning that we were going to win that game," O'Malley said. "We want it so much more, especially because we haven’t won in five years in crosstown. Everyone wanted it. Once those free throws were in, even before then I was like, ‘I’m making these and we’re winning.’”

"The girls set out a goal this year that they wanted to beat Helena High and they wanted to continue to have success, and they just did a great job of that," said Garcin-Forba.

The Bengals jumped to an 8-0 lead in the opening quarter but went cold in the second period as the Bruins trimmed the lead to 13-9 at halftime in a game full of nerves and, often, rushed basketball. But the third quarter belonged to Helena High, with three separate three-point plays giving the three-time defending Class AA champion a 10-point lead at 26-16.

Kylie Lantz hit a 3-pointer to give the Bengals a 20-16 advantage, then Emily Feller added a steal, layup and a free throw following a foul. Kloker hit one of her four 3-pointers to end the period.

In the final quarter, it was Capital's defense that sparked its offense, with Paige Bartsch tallying consecutive blocks on a Bengals possession, eventually leading to a pair of O'Malley free throws on the other end to trim the lead to 28-27 with 1:57 remaining. Paige Bartsch, who finished with a double-double of 15 points and 13 rebounds, tied the game on a free throw 44 seconds later, setting up the crazy finish to regulation.

“I think we all knew that our defense controls our offense, so we had to start," O'Malley said. "Our offense wasn’t really dropping for us, so we started in on our defense and once that first person gets a steal, your team thinks, ‘She can do it, I can do it, we can all do it.’ It leads to offense, obviously.”

"We told them to win the quarter. I thought we came out and we still weren't executing great. We were turning the ball over," said Garcin-Forba. "And so our message (between the third and fourth quarter) was, this game is not over. We have eight minutes to go play, win this quarter, go win this quarter. And I thought they did a great job of that. Even when we got down 10, they still battled back and they showed a lot of grit down the stretch."

"Give Capital their due, they played well and closed the game. We were up 10 and they had better poise than us tonight, for sure,” added Peterson.

Kloker finished with 12 points, all on 3s, to lead the Bengals, who also got 10 points from Lantz. Caroline Bullock had four points and 10 rebounds, while Feller chipped in with three points, four assists and three steals.

But Capital's duo of O'Malley and Bartsch was too much to overcome, with the pair scoring all but 10 of the Bruins' points in the win. Dani Bartsch added four points, Aryana Ridlon three, Jaymee Sheridan two and McKinlee Mihelish sank a free throw to round out the scoring for Capital.