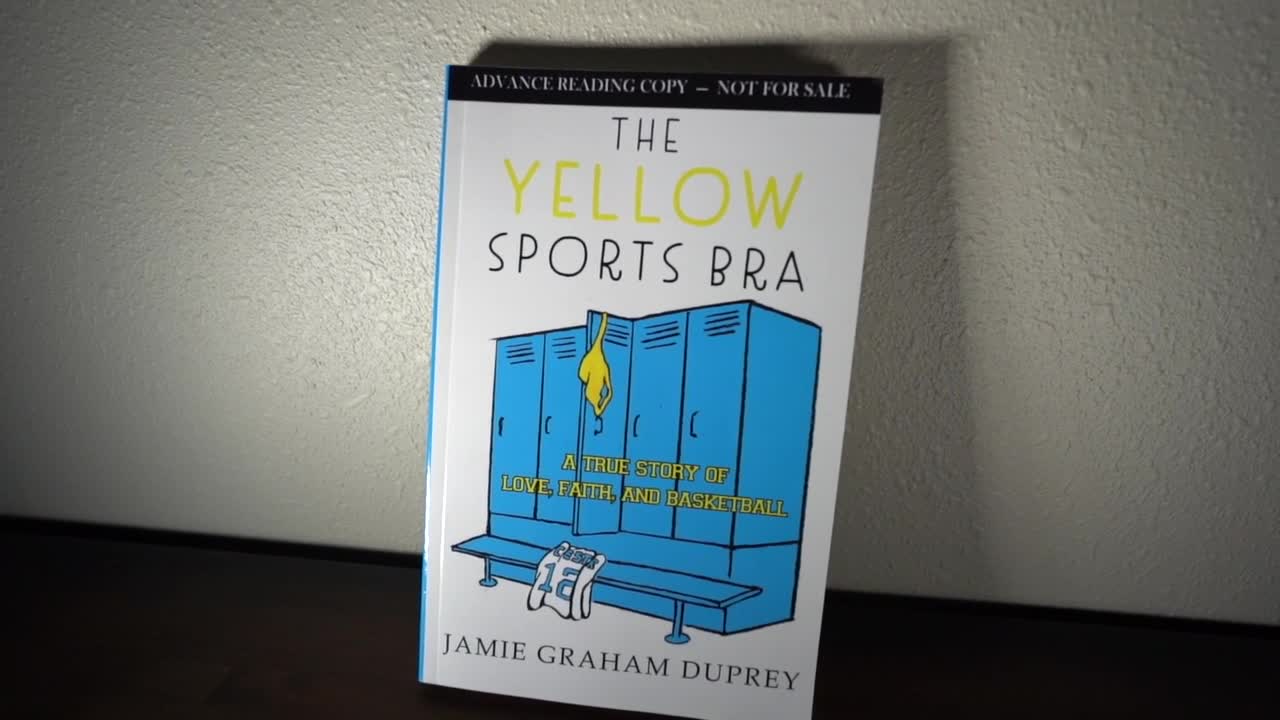 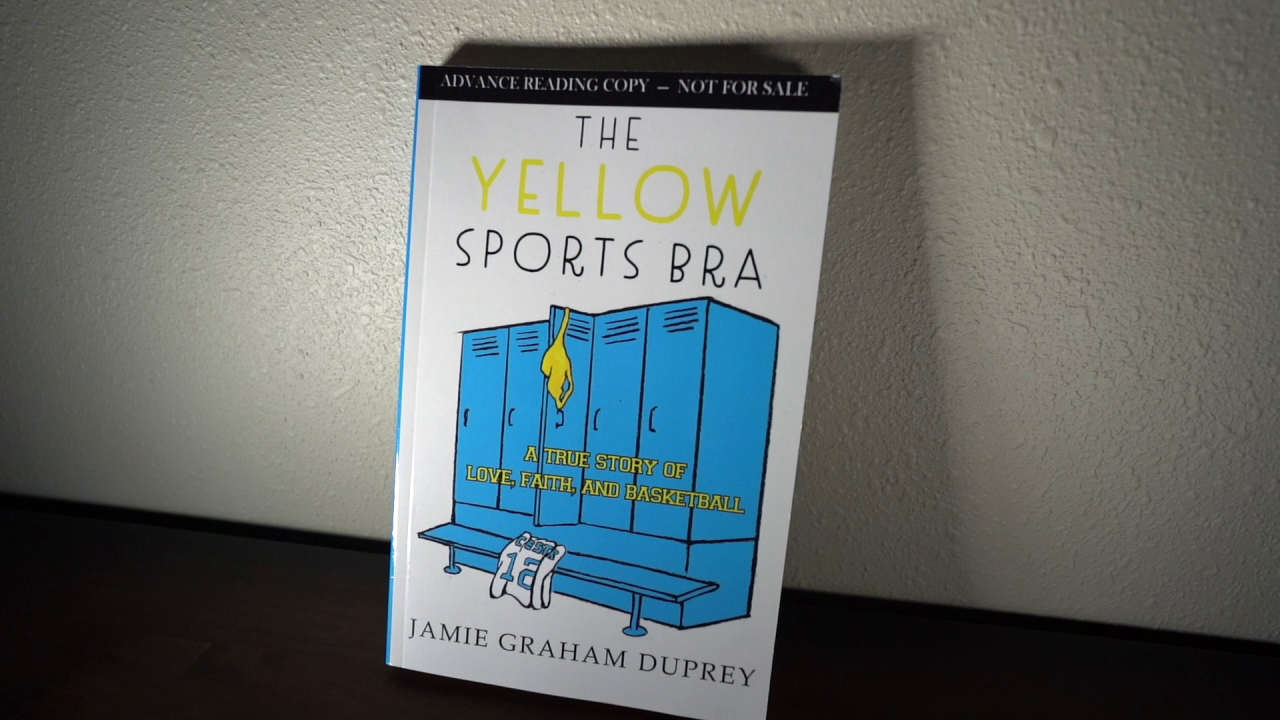 Like most kids, she was drawn to the classics — Disney movies and Saturday morning cartoons. Her favorite, though, unlike most kids, was far from pop culture.

“I used to watch the videotape of the 1992 (Class C) state championship, the (Chester) boys there under Mike McClean when my dad (Jim Graham) was assisting,” she recalled. “That was like something that was just fun for me to watch. I would watch Aladdin and that.”

Graham, now Jamie Duprey, remembers idolizing those players, as well as the ones before and after, and emulating them on the outdoor courts and in the driveway.

It was those memories that made Duprey want to be a role model when it was her turn to lead the high school team, the Coyotes, on the basketball court. And it was those same memories that led to Duprey penning her own book, The Yellow Sports Bra: A true story of love, faith, and basketball, which is scheduled to be released at the end of the month.

“I sort of always had that, I would talk to somebody or have a conversation or a thought and think, 'Oh, I'd like to write a book about that.' So it was always this intangible goal that felt very far off,” Duprey told MTN Sports.

The idea came and went over the years, but when Duprey and her family moved from Big Timber to the Black Hills, she again mentioned the thought of a book and her husband, Jeremy, gave her the nudge she needed.

“My husband asked, 'What would that take? What would that look like?' So I bought an online, 'Write your book in 16 lessons,' and it didn't take me long to realize I had all the resources and research for this, because I just used my piles of journals that I kept through high school and binders of stats that my coaches kept and articles of newspapers that my mom kept and even VHS tapes,” she said. “So it was all right there and once I landed on that it all unfolded pretty quickly after that."

“My mom and grandma wrote every day, and my mom still does,” she continued, describing her own passion for writing. “We'll be at an event and someone will say, 'Well, what did we do that Thanksgiving?' And my mom will run back to the room and say, 'Oh, I'll just go check my journal,' and she'll look up a date. That was sort of just something I always did and I'm grateful for that modeling. So once I decided (to write a book), I just put my head down and didn't say anything to anybody and kind of got to it. The chronology was just right there because it followed through that basketball journey that was freshman, sophomore, (junior and senior) for each quarter of the book. And so that flowed pretty easily.”

Graham and her classmates played a part in winning four district basketball championships, with the ultimate prize, a Class C state title, coming her senior season. Those basketball seasons are chronicled in the book, as are the friendships and relationships, as well as the life lessons and grief experienced during her time on the Hi-Line.

“There's a preseason section, as well, so it's five sections with the preseason and four quarters, but that fourth quarter is substantially thicker than the rest of the book,” Duprey said of the 2001-02 school year. “I definitely noticed that, too, how important that senior year and all its revelations, not only with the basketball piece, but just that coming of age, those formative years, the mindset, the thought process, it's so different when you're at that end of the stage high school area, as opposed to when you're an underclassman.”

Duprey said she read the book to her own children, a daughter and two sons spanning from 7 to 12 years old, and watched as they reacted to the various stories, including one instance of shock and disappointment where she “was not a good friend.”

“I appreciate that platform to sort of talk to my own kids about, or just kids that I'm involved with in our community, and reminding them of all those lessons learned,” she said. “I've had a few people read it that are completely disconnected to Montana or to me as a youth, and they've really been able to connect it to their own story, which is the goal, right? When we read a memoir, it's a way that an author can relate to a reader on a personal level. And you hope that it does trigger some reflection with each individual in their own context.”

Duprey said the book has been well-received by the characters it entails — the former classmates and coaches — while also receiving advanced praise from the likes of former schoolmate and NFL tight end Casey FitzSimmons, Big Timber-raised NFL coach Tim Hauck and former U.S. Senator Alan Simpson of Wyoming.

As for the title of the book?

“I giggle every time I hear it,” Duprey laughed. “I figured I wasn't too worried about the title when I was writing it, and I assumed that once I got through it would just come to me, it would be there, and it still didn't.

“I was checking in with my mom and she had read it and I was like, 'I don't know, (my daughter) Jordan, she really likes Extra Pass. But when you type that in on Amazon, it's like all these pages and it's not distinctive and unique. I don't know. We had this big list and my mom's like, 'Well, you know, you wrote a lot about the yellow sports bra. That's kind of funny. Could you do something with that?' And I kind of chuckled and then we hung up and then I was like, 'Yeah. The Yellow Sports Bra, I love that.’”

The book’s Montana connections extend beyond its pages, with publishing company Aubade Publishing directed by former Treasure State native Joe Puckett, the author of The Dream: The story of the 1978 and 1979 Peerless Panthers.

“I was reading his book and he was reading my book, and we just had so many characters that were similar,” said Duprey, who said both books contain some of the same subjects. “Kevin St. John was in the opening pages of my book as a teacher opening the gym for us, and that was an opponent that Joe played against.”

Duprey, who is scheduled for a book signing at the Sweet Grass Fest and Big Timber rodeo this weekend, is excited to gauge comments and reviews of the book, which she hopes “can be a platform to spread discussions” and talk with kids about setting goals and making good decisions.

Meanwhile, there are many more life lessons and hundreds of personal stories in Duprey’s journals, posing the question: Could another book be on the horizon?

“My daughter thinks I need to write a sequel about college, which would be quite a different story, but who knows. I'm up for whatever,” she said. “I've learned that it's best to say, 'Maybe,' and 'What if?' instead of a hard yes or a hard no. That could be something fun to explore in the future.”

The Yellow Sports Bra: A true story of love, faith, and basketball is available for pre-order by clicking here. For more information regarding the book, upcoming events and book signings, and other opportunities, please visit Jamie Duprey’s website here.