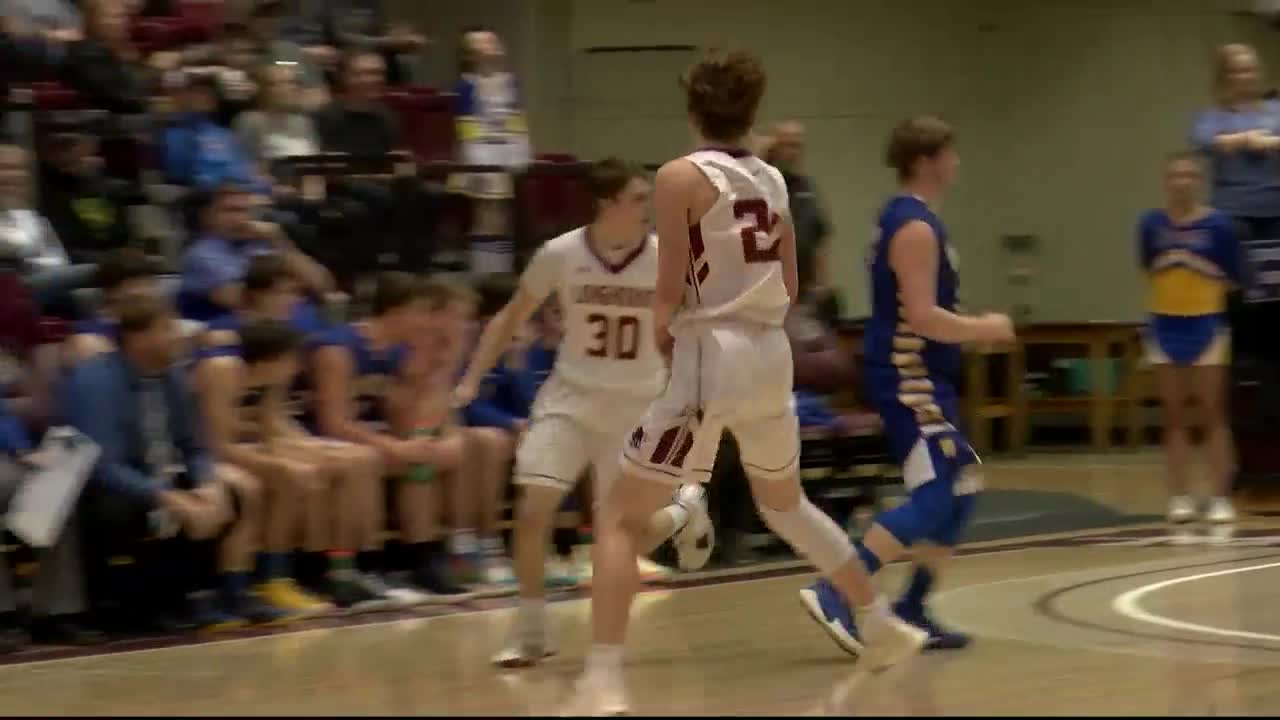 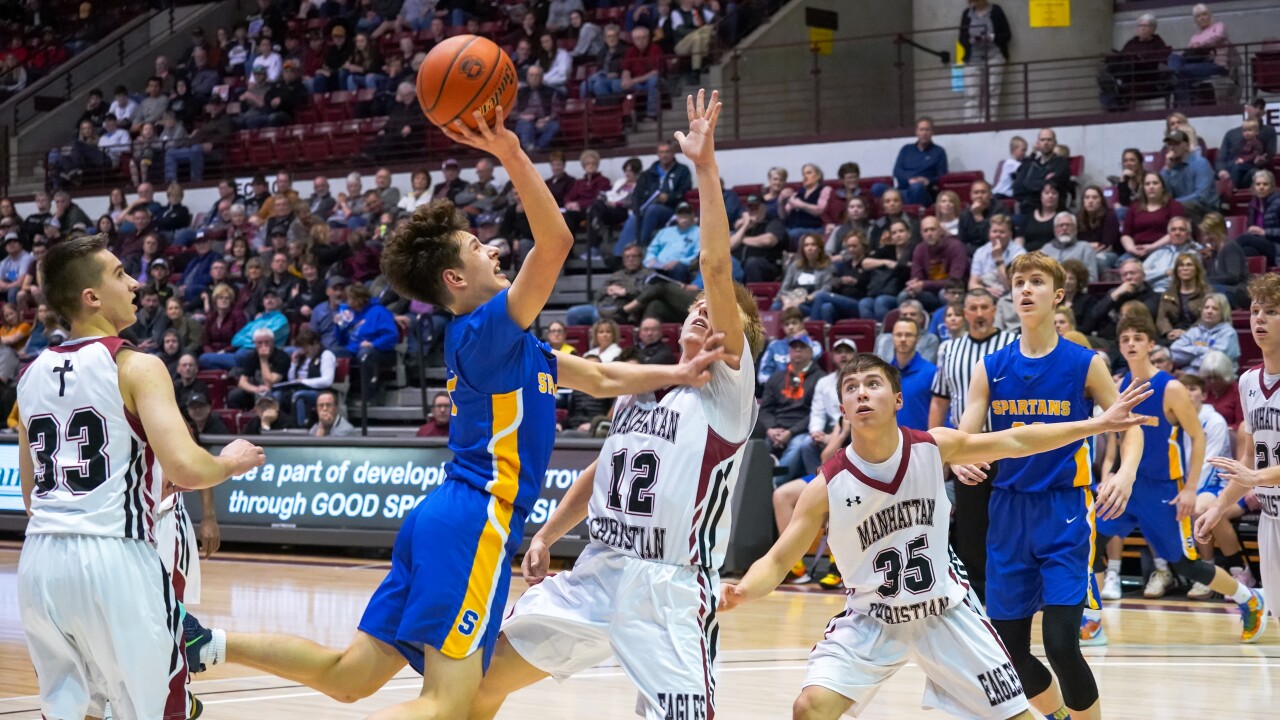 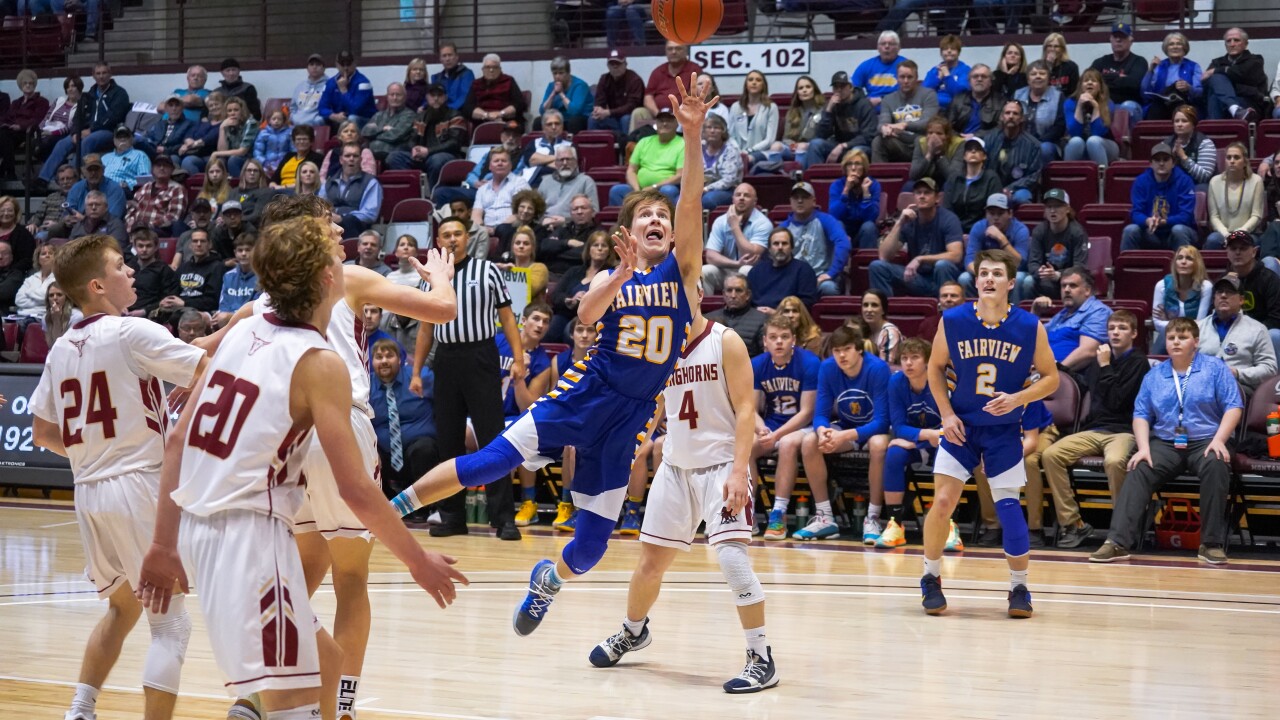 MISSOULA -- For Class C boys basketball fans that put on the most miles this weekend, it's worth the drive.

For the first time in 40 years, two eastern Montana teams will square off for the Class C boys basketball state championship, after Fairview and Scobey won semifinal games on Thursday at Dahlberg Arena. Saturday's championship will be a rematch of last month's Eastern C divisional title game, where the Spartans won 59-36.

A quick search through the Montana High School Association archives shows Outlook's 1980 title win over Opheim, 44-35, as the last time teams from the eastern part of the state met for Class C's greatest prize.

"It hasn’t happened in a long time and I think we’re going to do a great job representing our side of the state, make it a good state championship," said Scobey post Brayden Cromwell.

"The East finally gets to show out in the championship. It should be a good one because they’re also really good athletes. It’s going to be fun," added Spartans' guard Aidan Fishell.

Saturday's championship game is scheduled for 6 p.m. on the campus of the University of Montana.

Recaps from each semifinal game can be found below.

"Coach (Jason Wolfe) just wanted us to take it one game at a time, so that’s what we did. We came in with the mentality that we were going to win that game," Fishell added. "We’re sick of getting to that third-place game, so we gave it everything we had and it worked out for us."

Arguably the most-anticipated game of the weekend at Dahlberg Arena, the two teams traded blows in a high-tempo first quarter, with the Spartans leading 11-8. But Brayden Cromwell scored nine points in the second quarter, including a pair of and-ones, as Scobey started on a 6-0 run that saw Handran reject a Manhattan Christian fast break attempt.

Cromwell's first basket-and-the-foul situation pushed the lead to 10, 20-10, and the rout was on. Cromwell added another three-point play, Aidan Fishell scored four points and Jayce Tande added four, including a shot to beat the buzzer, as the Spartans jumped in front 31-19 at intermission.

The Spartans didn't let off the gas in the third, scoring the first seven points on a Tande basket in the lane and 3-pointer, followed by a Handran bucket in the paint to double the lead, 38-19. After a 6-0 run from the Eagles, the Spartans sparked another run, this one 13-0, with Tande knocking down another triple and scoring in transition after an Eagles' turnover just seconds later.

Tande finished with 19 points on 3-for-6 shooting from downtown. Fishell had a game-high 26 to go with five rebounds, while Cromwell had 17 points and six rebounds.

Handran had six points and eight rebounds, plus a pair of blocks for the Spartans, who shot a blistering 58 percent in the game. The Spartans also out-rebounded the Eagles 37-25.

"We knew we had the size advantage down low, and coach said to try and beat them up down low," said Cromwell. "The guards did a good job of passing it in, and when they collapsed, just pass it back out and they did a really good job of hitting shots, getting momentum."

The Eagles struggled to shoot everywhere but the free throw line, sinking all nine of their attempts from the charity stripe, but making ony 13 field goals and a bleak 4-for-23 mark from beyond the arc. Sam Leep had a team-high 16 points and was the only Eagle in double figures.

"Caden Handran and Parker Cromwell had their two best scorers, I don’t know how many they had, but Sam Leep and Josiah Amunrud are pretty good scorers and they held them pretty good," said Fishell. "That was our focus coming into the game, and they did their job. That was a big thing and it really helped us out."

Manhattan Christian will meet Southern C foe Twin Bridges on Friday afternoon at 4:30 p.m., with the loser's season coming to a close.

Cody Asbeck knew his Fairview Warriors were ready to take the next step. Thursday evening, they proved it, rallying past Fort Benton in the fourth quarter of a Class C semifinal, 44-37, to advance to the program's third state-championship appearance in the past eight years.

"We’ve been a regular here, but we haven’t taken the next step, necessarily, the last couple years. We’re just excited," said Asbeck. "The last four years since I’ve been here, we’ve made it to the state tournament and had a couple disappointments, losing in the first round and stuff like that, so it kind of feels like we’ve gotten over the hump and now we can go out and just take care of business."

After a slow opening half that saw the Longhorns hold an 18-15 advantage, Fairview started to turn the tempo in their favor, with pressure defense rattling the Fort Benton press-break and leading to turnovers and easy opportunities for the Warriors. Fairview cut the lead to two entering the final eight minutes, 29-27, and remained in the two-point deficit for the first 2 minutes, 30 seconds of the fourth.

But Asbeck's jump shot with a defender inches away tied the game at 35-all, then the Warriors took a 37-35 lead on free throws and never trailed again.

"In the huddle we kept saying, ‘We’re one stop away from flipping the script.’ That’s what we kept saying," Asbeck said. "It took us the first couple possessions into the fourth quarter to finally get that stop, but once we did that, I mean, our confidence soared. We knew we had them on the ropes and we had to finish it."

Alex Schriver sliced his way to the rim for a leaning left-handed shot to put the Warriors in front 39-37, and Fort Benton never scored again. Schriver had nine points, two assists and two steals, while Josh Herron had a team-high 13 points, again throwing down a thunderous dunk that brought the Dahlberg Arena crowd to its feet.

Asbeck had 10 points and five rebounds in the win.

"I think just the group of guys we’ve got, we have a guy that’s played in two of (Fairview’s state championship appearances) in coach Brock Schriver, he’s offering words of wisdom all weekend about how we should be preparing, what we should be doing when we get back to the hotel, stuff like that," said Asbeck. "We have guys that played on those teams, too, that are here in the crowd, all week they’ve been encouraging us and giving us pointers. That’s a big deal to have people that have been in that situation before."

Fort Benton was again led by the Diekhans, Garett and Hayden, who combined for 25 points and 11 rebounds. The Longhorns will meet Northern C rival Belt on Friday at 3 p.m. in a loser-out contest.