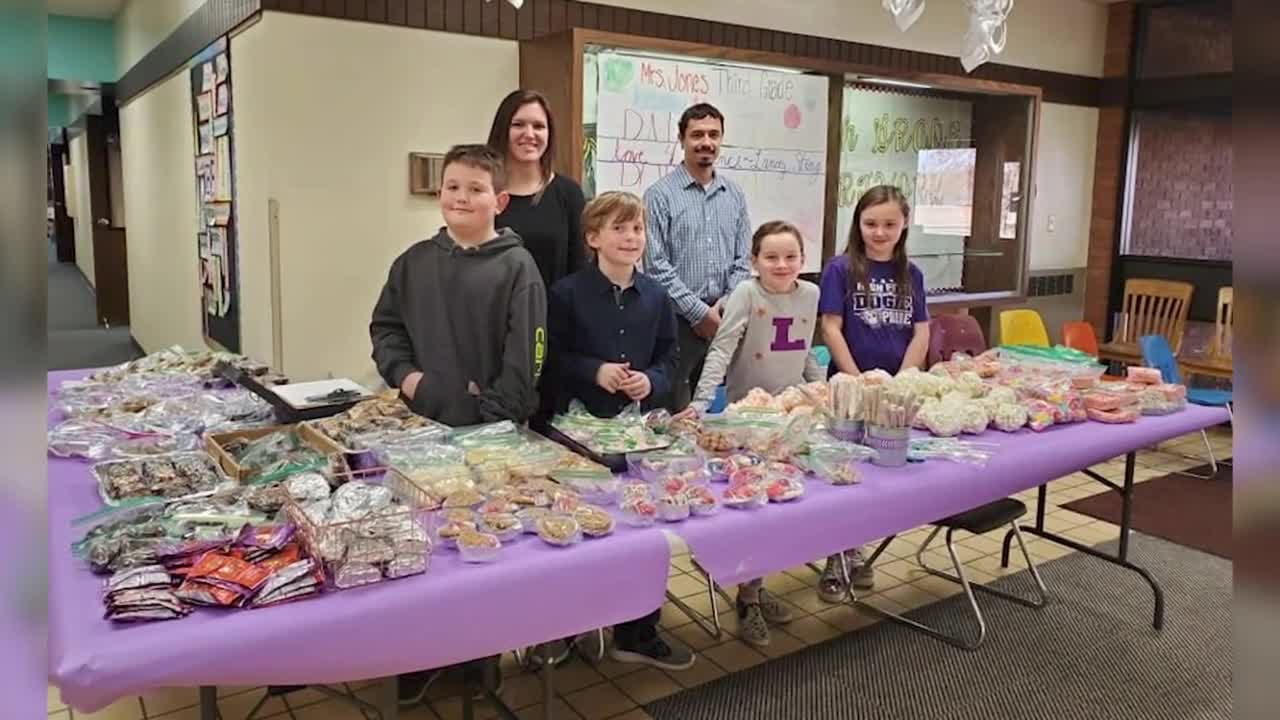 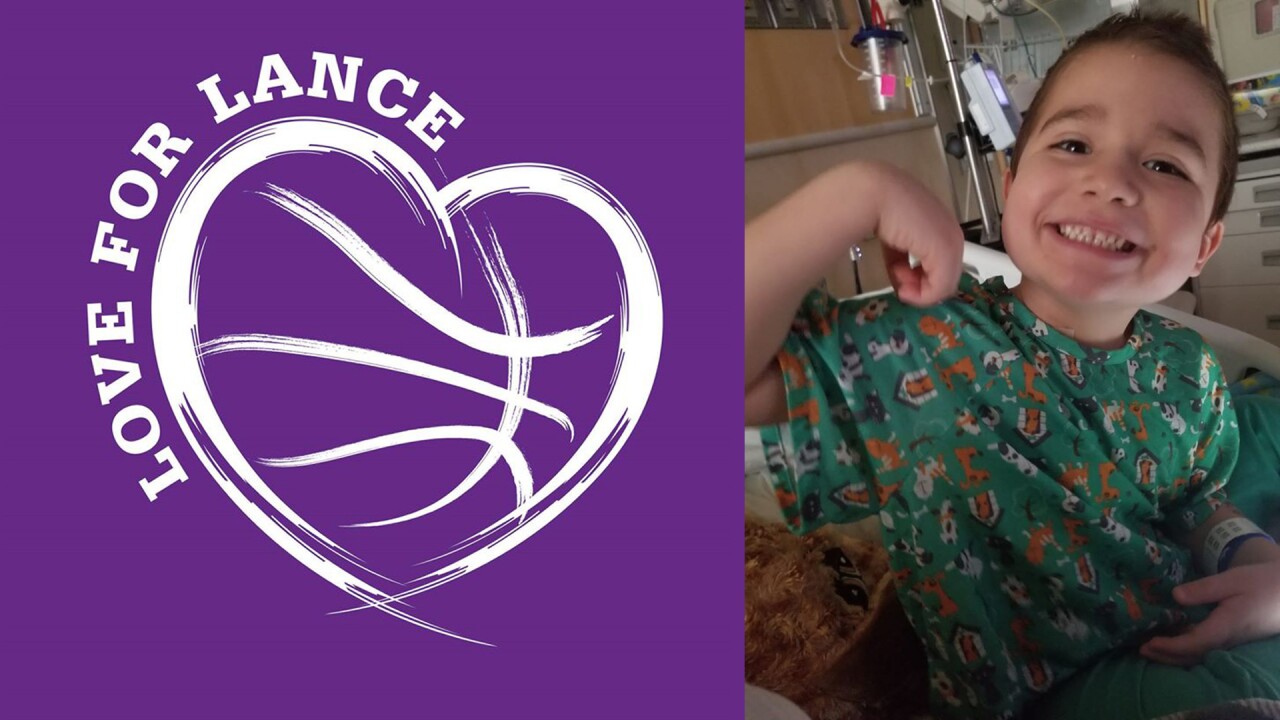 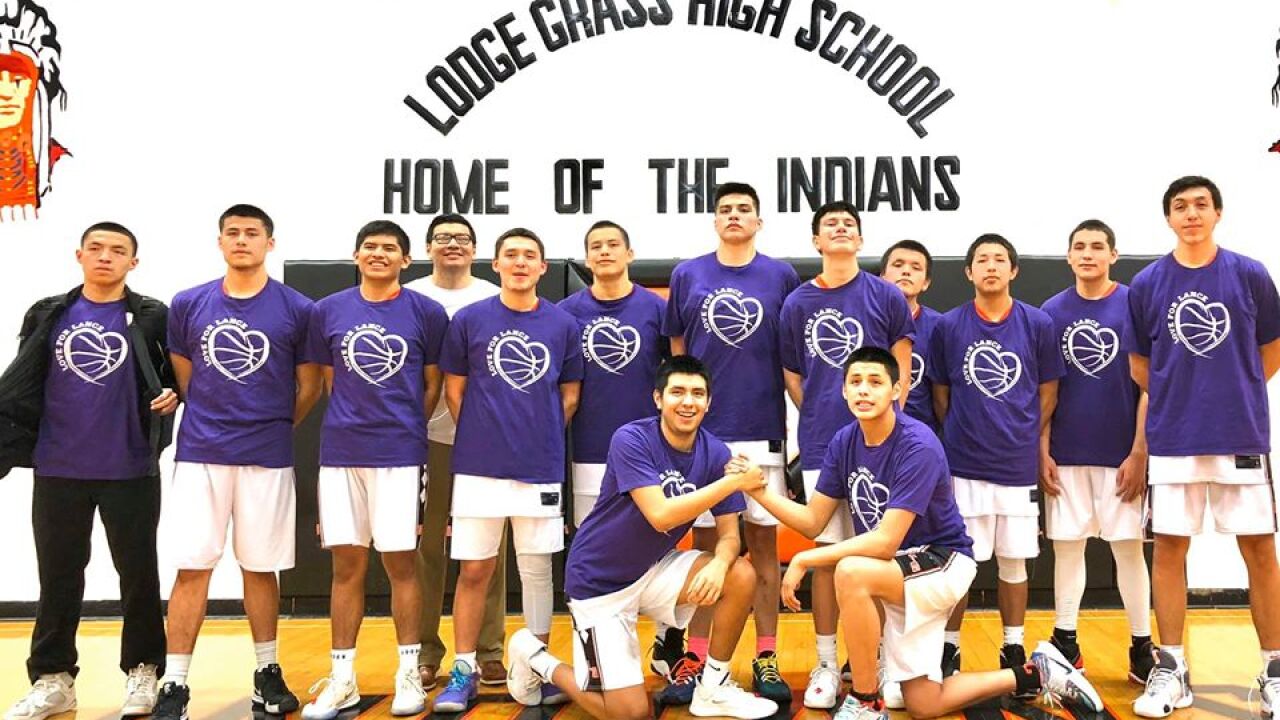 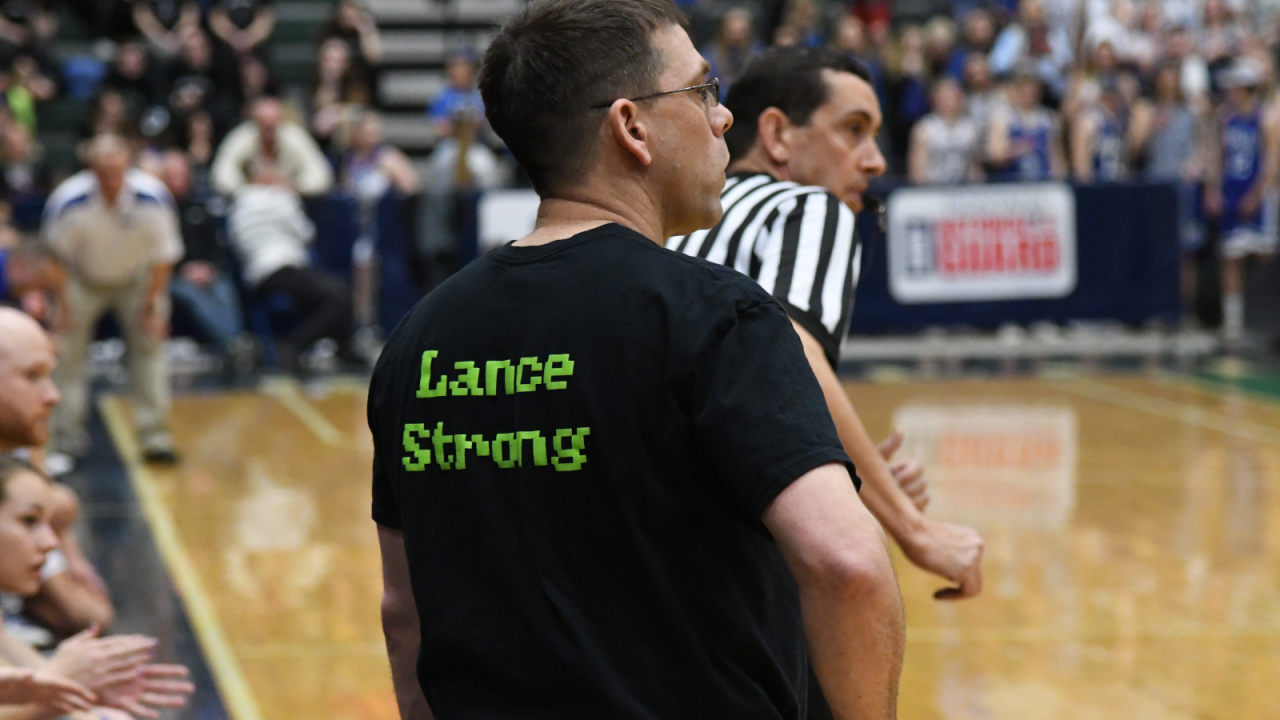 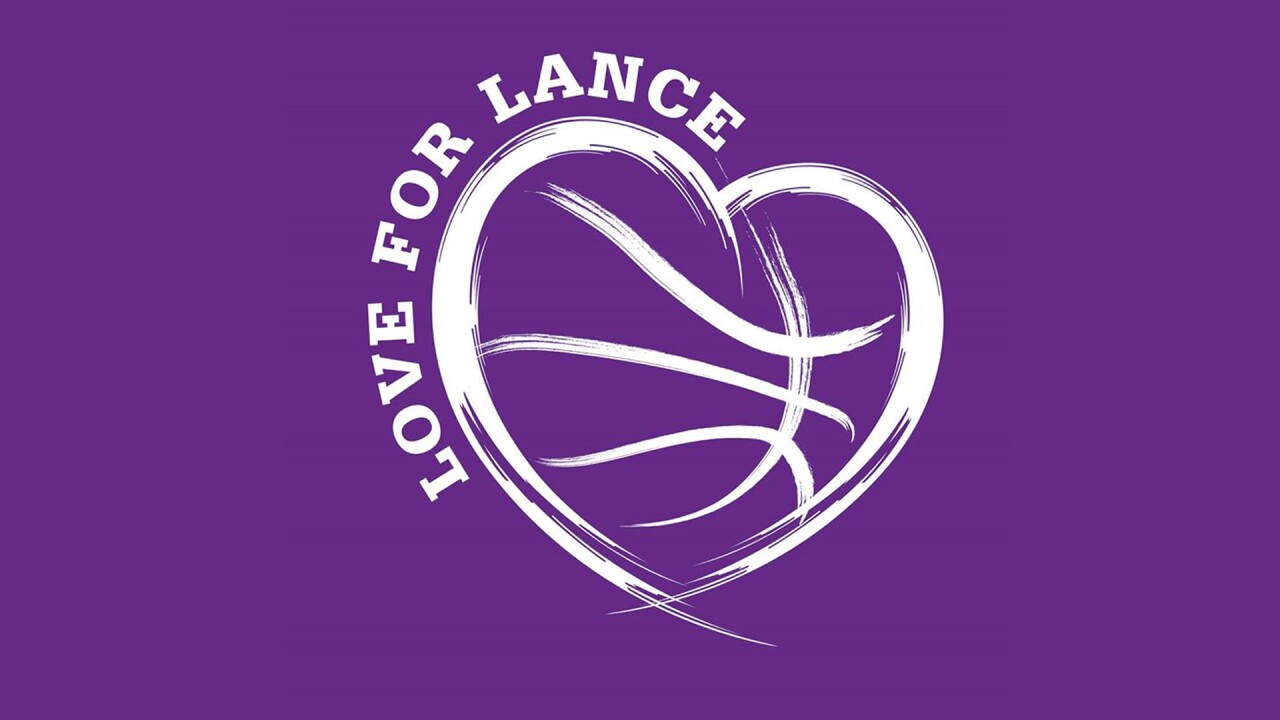 The Forsyth community has always had a love for Lance Lawrence.

His parents, Eric Lawrence and Jill Dana, are 2004 graduates of Forsyth High School. Both are active members of the community, Jill managing the golf course at the Forsyth Country Club and Eric coaching basketball and working at C&K Meats.

Lance is the youngest of their three boys, a sweet, lovable 4-year-old with an infectious smile who loves the movie Inside Out.

While his dad was helping coach the Forsyth boys to a 47-36 win over Baker on Jan. 11, Lance was playing with friends as usual. But he returned to his mom’s lap in the stands not feeling well. By the end of the night, he had flu-like symptoms, was vomiting and seemed to always be tired.

It’s been a whirlwind 12 weeks since.

“The nurse came in and she was like, ‘We found something on the CT scan that it can’t identify, so you’re going to be either flying to Denver or Billings tonight,’” Jill recalled of a visit to a Miles City hospital after Lance’s symptoms worsened over the course of a week.

“I was on a flight with him to Denver that night, and we’ve been here ever since. I think that was the 17th of January,” she added.

Lance was admitted to the Children’s Hospital in Denver. He underwent a battery of tests over the coming days, ultimately learning he had a 2.4-centimeter tumor on his brain. On Jan. 24, he was diagnosed with pineoblastoma, “a rare, aggressive type of cancer that begins in the cells of the brain’s pineal gland,” according to www.mayoclinic.org.

“I think I had prepared myself for the worst, I guess,” Jill said. “It still was a shock. But I just knew that my job now was just to take care of him and make sure he was as healthy as I could make him so the treatments went well.”

Lance’s treatments aren’t for the weak: six two-week rounds of chemotherapy, including stem cell transplants in the final three rounds, before starting radiation. Because of the location of the tumor, surgery isn’t an option.

While Lance is fighting like heck in Colorado, his friends and family are fighting back in Montana. A GoFundMe page started on Jan. 18 has raised more than $8,200 for Lance and his family to help mitigate expenses.

Members and businesses of the Forsyth community have also organized other fundraisers, including meals, auctions, raffles and a bake sale put on by the Forsyth third graders that raised $850. Family friends have sold wristbands and Love for Lance T-shirts, which feature a heart-shaped basketball. Forsyth girls basketball coach Rian Pinkerton wore a Lance Strong T-shirt on the sideline during the Class B state basketball tournament.

Basketball has long been important to Lance’s family and has, to a degree, served as southeastern Montana’s rallying point. Both Jill and Eric played in high school, and Jill played in college, first at Miles Community College and then at Montana Western, where she’s still in the Bulldogs’ record books for her 3-point shooting. Eric has had an on-and-off relationship with coaching over the years and has spent the past two seasons as an assistant for the Forsyth boys. He also coaches the middle school team.

The Forsyth basketball teams have worn the Love for Lance shirts during warmups, but they haven’t been alone. The Lodge Grass teams donned the shirts, too.

“We used those for our warmups and then used (them) at districts and the postseason, too, just to let them know they weren’t alone in the fight and any way we could help and whatever we could do,” said Lodge Grass boys coach Josh Stewart. “We just wanted them to know we’re on board and (wanted to) be with Lance and Eric and the rest of the Forsyth community.”

The schools at Baker, Colstrip, Custer, Ennis, Red Lodge, Roundup, Shepherd and others have also demonstrated their support in one way or another.

“It’s kind of like an awesome feeling to be from a small town where everybody knows everybody, because everybody’s willing to lend a helping hand. It’s just kind of blown up, really,” Eric said. “When I think about it, all of them have pretty much played a part in making the tough time a little easier on us.”

There are likely still tough times ahead as the coronavirus pandemic has added another challenge to an already difficult situation. Lance’s immune system is compromised, and he’s already had one scare.

His fever spiked to 104 degrees on March 25, which naturally prompted a COVID-19 test. Fortunately, it came back negative, but the coronavirus fears are now keeping Lance in the hospital — “safe, not stuck,” according to his mom.

“He’s always smiling. Kids are pretty amazing,” Jill said, later adding, “He does have really bad days. He’s just angry, I think, and frustrated, because, ‘Why am I in this hospital bed connected to this IV pole? Why?’”

Jill and Lance were staying at Brent’s Place, a nonprofit organization that serves as “a long-term home away from home for children and families with cancer or other life-threatening illnesses while they receive treatment at local hospitals,” according to its website.

As stay-at-home orders have been implemented across the country, Brent’s Place shut its doors to visitors, too. It remained open to permanent residents like Jill and Lance, but Eric, who spent a few weeks in Denver with Lance and Jill before returning to Forsyth to care for Lance’s older brothers, can’t see his young son during his cancer battle.

“It’s good to talk to Jill daily, as far as FaceTiming and stuff, but it’s very difficult to know I don’t have any control over any of it,” he added.

Though he can’t physically be with his son, Eric is putting his trust in the doctors in Colorado. And Lance’s treatments have been going well to this point.

A recent MRI showed that the tumor hasn’t spread and is, in fact, shrinking and breaking down. Lance has started physical therapy and got his first half-mile sticker on March 31 after pedaling a tricycle around the hospital.

Meanwhile, support keeps flooding in as people back home continue to watch social media for updates.

“Wish we could be there to really cheer him on and really meet him in person, but we just wanted the family and Lance to know that we’re here no matter what,” Stewart said.

“There’s really no words for (the support),” Jill said. “We’re just so thankful that that stress is taken off. There really aren’t words for it.”

There are actually three: Love for Lance.

If you would like to purchase a Love for Lance T-shirt, please email love4lanceshirts@gmail.com.