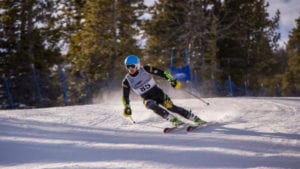 Starting Thursday and continuing through Saturday, 18 teams and 160 athletes will compete in three days of alpine ski racing at Red Lodge Mountain. This is the first time since 2016 that Red Lodge Mountain has hosted the Western Regional Championships.

The women’s giant slalom races will take place on Thursday followed by the men’s on Friday. The men’s and women’s slalom competitions will both take place on Saturday.

Rocky’s Andraz Reich-Pogladic will attempt to repeat his success from last year. In 2018, the senior from Velerje, Slovenia won titles in both giant slalom and slalom races. Sean McCormick joined his teammate on the podium with a second place finish in the giant slalom.

Rocky’s Lisa Hitula swept the slalom and giant slalom titles last year. Emeline Lafarge will look to step into her shoes this year and lead the Battlin’ Bears to victory.