KANSAS CITY, Mo. — Carroll College held steady and Montana Western moved down one spot in the latest edition of the NAIA Men’s Basketball Coaches’ Top 25 Poll, which was released Tuesday.

The Fighting Saints, who won the Frontier Conference’s No. 1 seed for the conference playoffs, are ranked sixth with a 25-5 overall record. Carroll has won eight of its past nine games, including a 20-point win over Western in the regular-season finale on Feb. 24.

Western fell out of the top 10 of the rankings this week, moving back one place from its previous No. 10 ranking. The Bulldogs are now 24-6 after defeating Montana Tech in the first round of the conference playoffs on Tuesday.

Lewis-Clark State is the third and final Frontier team in the top 25. The Warriors sit at No. 18.

The Frontier Conference playoffs continue on Friday with Carroll hosting Rocky Mountain College, which defeated Montana State-Northern on Tuesday, and Western hosting L-C State, which topped Providence in the first round. The Frontier championship is March 5.

The NAIA national tournament is March 14-20 in Kansas City. The bracket will be revealed on March 7. 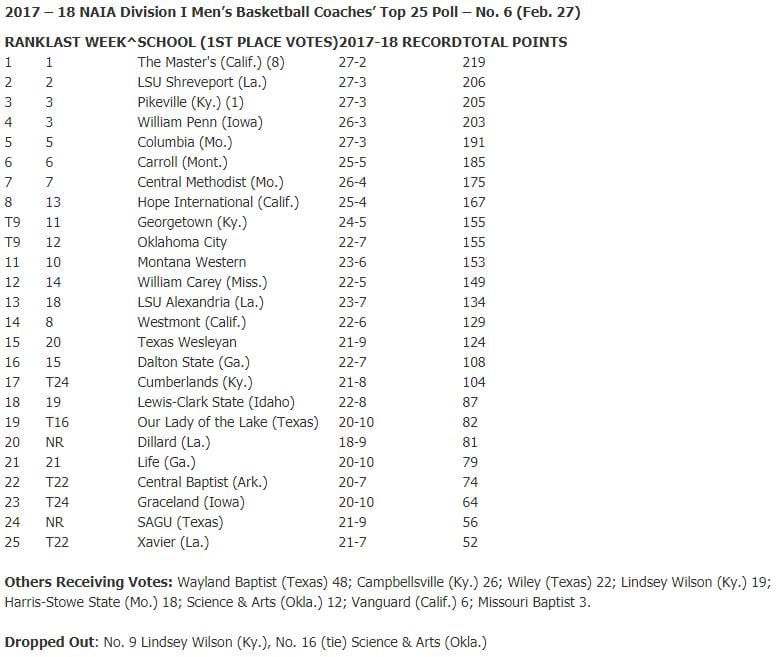