Carroll, which was ranked 14th in the last poll, climbed up to No. 6 this week. The Saints (22-4) have been ranked as high as No. 2 this season after starting the season with 15 consecutive wins. Carroll then endured a midseason slide that saw it lose four of six games before this current five-game winning streak.

Montana Western (20-5) fell from No. 8 to No. 10 in the latest rankings. The Bulldogs have won two consecutive games since losing a 101-96 shootout against 19th-ranked Lewis-Clark State on Feb. 3. The Warriors (20-6) held steady in the poll.

No other Frontier Conference teams are ranked in the top 25 with the regular season winding down. Just four games remain on the regular-season schedule for both Carroll and Western. The Frontier Confernece playoffs are set to begin Feb. 27.

The Master’s (Calif.) took over the top ranking from William Penn (Iowa), receiving all nine first-place votes. William Penn fell into a tie with Pikeville (Ky.) for third. LSU Shreveport (La.) is ranked second, and Columbia (Mo.) rounds out the top five. 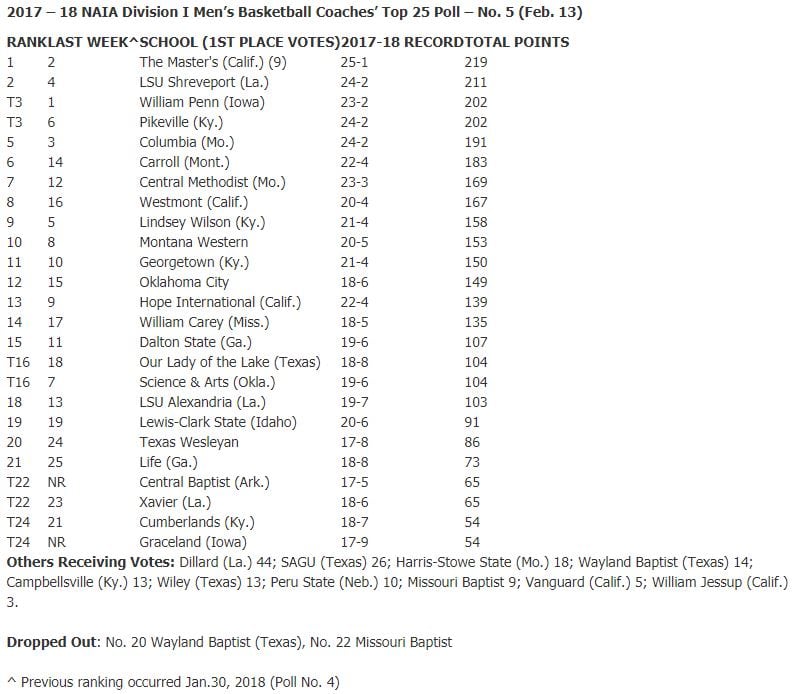