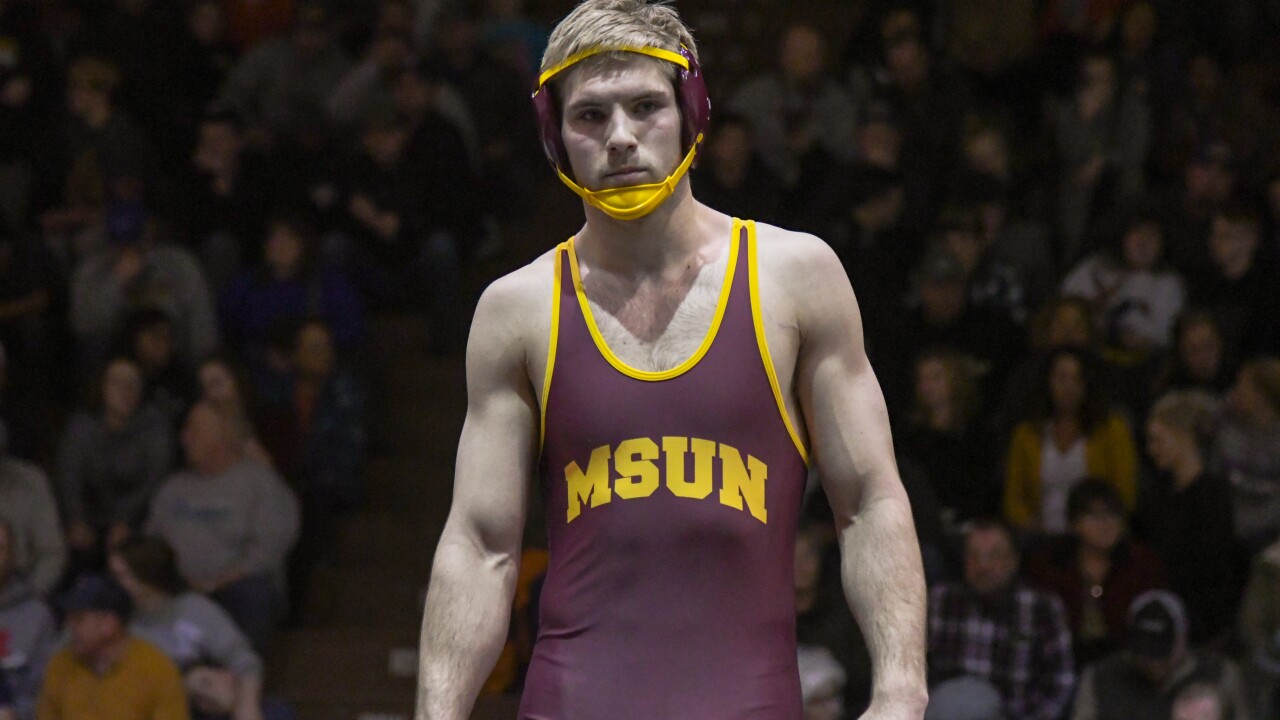 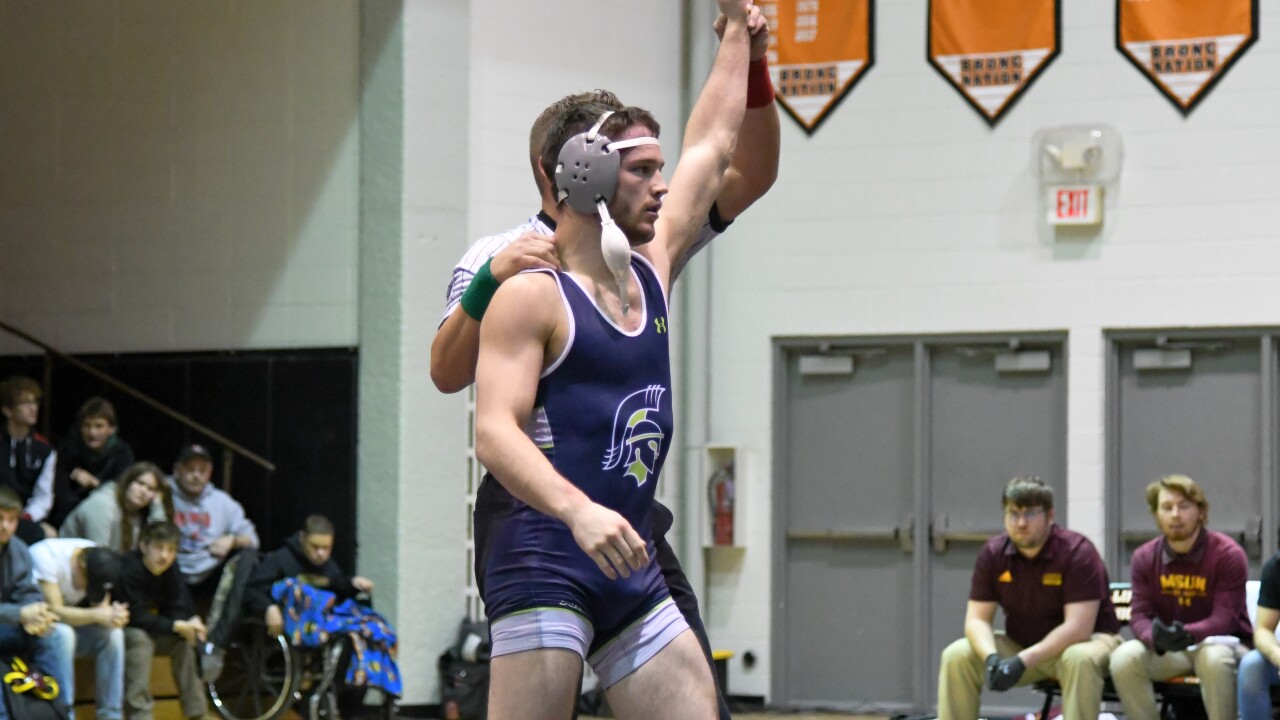 (Editor's note: This story is an update from the original version, which can be found below)

Two MSU-Northern wrestlers and one from the University of Providence will wrestle for NAIA national championships on Saturday evening at Hartman Arena.

MSU-Northern wrestlers Nick Kunz and Isaac Bartel advanced to the title matches at 125 and 197 pounds, respectively, while Providence's Casey Dobson will compete for the 157-pound championship.

Kunz earned an 11-4 decision in his semifinal match and will be paired with Grand View's Justin Portillo in the finals. Bartel was a 6-4 semifinal winner and is set for a rematch of last year's national finals against Grand View champion Evan Hansen.

Dobson picked up a 4-2 sudden victory and will also face one of the powerhouse Grand View wrestlers -- Renaldo Rodriguez-Spencer.

Harbison's loss dropped him to the consolation bracket, where he suffered a defeat by pinfall. He will wrestle for fifth-place in the 285-pound bracket.

Fellow Argo John Hensley, who lost in the quarterfinals, won his first consolation match, but was pinned in 50 seconds in the second, sending him to the seventh-place bout.

WICHITA, Kan. -- MSU-Northern wrestlers Nick Kunz and Isaac Bartel, along with University of Providence grapplers Casey Dobson and Justin Harbison, will compete in the NAIA national wrestling championships semifinals on Saturday. Each is one win away from competing for a national title and has locked up all-American status.

Kunz, a junior from Helena Capital High in his third consecutive national appearance, pushed his way to the semis in the 125-pound bracket and is the lowest seed remaining. Kunz was seeded 10th entering the championships. He earned a pair of wins Friday to advance to Saturday morning's semifinals, winning a 4-2 decision and a 7-5 tiebreaker.

He will wrestle Isaac Crowell of Southeastern University in the semifinals.

Teammate Isaac Bartel, the No.2-seeded 197-pound wrestler, is back in the semifinals. The senior's two victories came via an 18-1 technical fall and 10-1 major decision, pairing him with No. 3 David Dow of Baker University in Saturday's semifinals.

Only a junior, Bartel placed third his freshman season and was runner-up last winter.

First-year Providence coach Steve Komac saw Dobson and Harbison work their way into the semifinals at 157 and 285 pounds, respectively. Dobson, the former Great Falls High standout, didn't receive a first-round bye and was forced to win three matches Friday to advance to the semis. His 5-1 decision in the quarterfinals sealed the trip.

Dobson, the No. 11 seed, meets No. 7 Nolan Saxton of Reinhardt University for the right to advance to the championship match. Dobson became a three-time all-American with the quarterfinal win.

Harbison pinned his way into the semifinals, landing an upset win over the No. 3 seed at the 2-minute, 26-second mark in Friday's quarterfinals. He also earned a 7-4 decision in the second round after opening the tournament with a bye. The Missoula Sentinel High grad will meet No. 2 Tanner Farmer of Concordia, a former University of Nebraska football player, in the national semifinals.

Argo John Hensley battled his way back from a quarterfinal loss in the 197-pound bracket, and sits two wins away from competing for third. Hensley can finish no lower than eighth, securing an all-American ranking in his senior season. It's the second all-American honor for Hensley.

"I'm really proud of those three for making it to the top eight," Komac said of Dobson, Harbison and Hensley through a UP release. "We still have one more day of wrestling left and some goals to accomplish."

Sidney native and Dickinson State University wrestler Gresh Jones, who was ranked No. 2 in the 133-pound division, was upset in the quarterfinal round on a 4-3 decision. Jones then was eliminated following a 7-5 decision, falling short of receiving all-American honors.

Bozeman native and Eastern Oregon sophomore Keegan Mulhill, the No. 7-seeded 174-pound wrestler, was upset by pin in the second round and was eliminated in his second consolation bracket match.

Day 2 of the NAIA Championships is scheduled to begin at 9 a.m. MST at Hartman Arena, with the championship semifinals highlighting the morning. The championship matches are slated for 6 p.m. MST and will be streamed live on ESPN3.