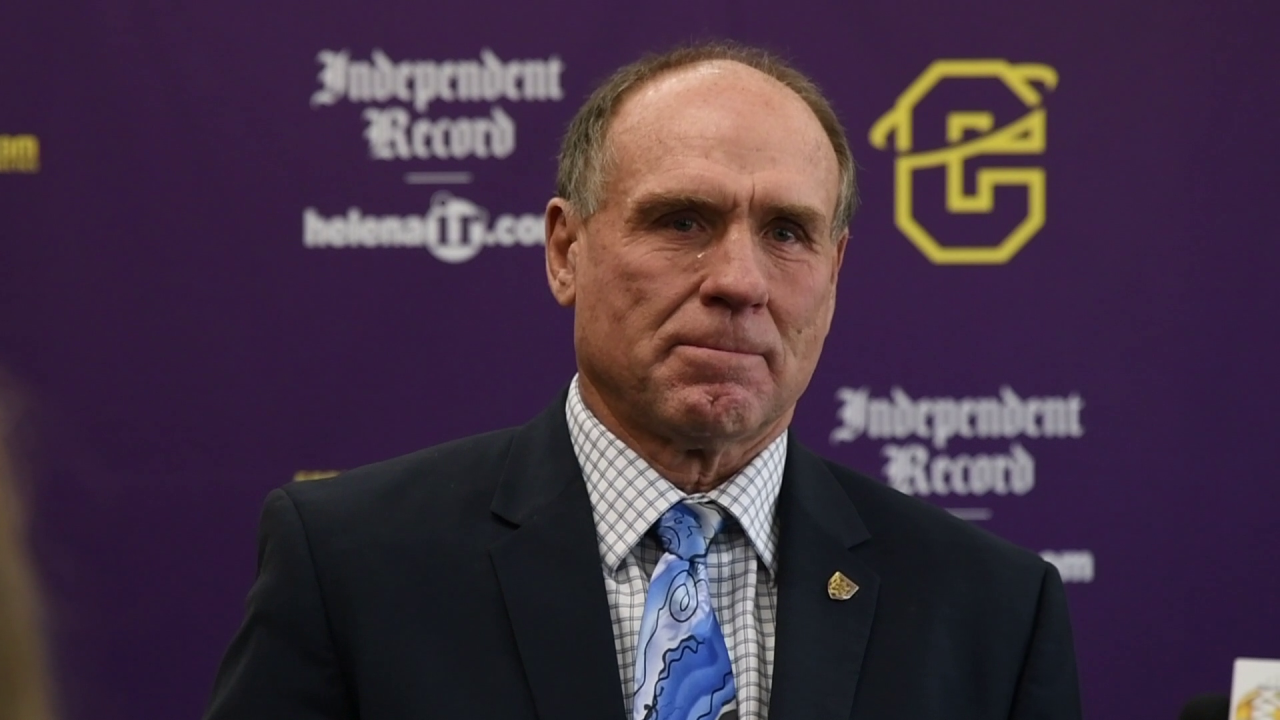 A tear falls down the cheek of Mike Van Diest as he announced his retirement at a Carroll College press conference on Monday morning. (MTN Sports photo)

BISMARCK, N.D. — Just days after National Signing Day, when he released the names of 45 scholar-athletes from all over the country who committed to play for him this fall, University of Mary head football coach Craig Bagnell announced the signing of his biggest offseason recruit — legendary National Association of Intercollegiate Athletics (NAIA) head coach Mike Van Diest.

"I love coaching football at the college level and feel that I can still contribute to the success of a program (like Mary's) and help young men become the best that they can be, both on and off the field," said Van Diest, who has the greatest amount of respect for Bagnell, who played quarterback for Polson High School in Montana. "I used to call him the Polson Pistol — and so did others — because of his arm strength, accuracy and for just being a gamer and coach on the field. I recruited him to play for us at Carroll, but I lost that one to the Marauders and their head coach at the time, Myron Schulz."

But Van Diest didn't lose many battles off or on the field. Van Diest's career with the Fighting Saints as head coach spanned 19 seasons from 1999-2018 — when he retired from coaching with a remarkable overall record of 203 wins and only 54 losses.

"It's an honor and privilege to bring Coach Van Diest onto our staff to help coach the Marauders football program," commented Bagnell, who's heading into his third year as head coach of his alma mater. "We just couldn't pass up a golden opportunity like this to bring on staff a man and coach of his caliber. His accomplishments speak for themselves — he's a champion in every sense of the word. Coach Van Diest is a walking encyclopedia, a football junkie who loves the game and chess match of game planning. Growing up in Montana and knowing who Coach Van Diest was at a young age, he was 'the man' in Montana. Our journey has come full circle — and now he'll be part of our team."

Bouncing ideas off other coaches and learning from one another is essential to continuous learning throughout the coaching ranks. As a defensive line coach for Northwestern University in 1989, Van Diest made a trip up north to University of North Dakota's (UND) Memorial Stadium in Grand Forks where he met Dale Lennon, another aspiring defensive line coach. Van Diest and Lennon, who is now the director of athletics at the University of Mary, spent time going over X's and O's and have stayed in touch ever since. Their career paths intersected on a professional level in 2007 when the two were finalists for the Montana State head coaching position.

"We are serious about bringing NCAA championship-caliber football to the University of Mary and our hometown area of Bismarck and Mandan," stated Lennon. "Mike and Craig have been talking football for over a year, ever since Mike first visited campus. Mike has had a lot of coaching success throughout his career, but his energy level is like a young coach and he's attacking this opportunity like it's his first coaching gig."

Van Diest left coaching, but the game of football never left him.

"I did not step away from my position last fall because I was burnt out or because of health problems," added Van Diest, who will now be close to family and friends here in Bismarck. "Craig is a bright, young coach who brings an exciting brand of football from his playing days here as a record-setting quarterback for the Marauders and now as the head coach. It's really a joy for me to watch him in person and pick his brain and share ideas. The game-script has certainly shifted on us, but that's been really fun and energizing to me."

"I read Mary's strategic plan for athletics and was very impressed with points that were made by Coach Lennon and the university's vision for scholar-athletes," remarked Van Diest. "I certainly agree with Mary's motto, 'Greatness through Virtue.'"

Providentially, Van Diest can say he found his own virtue when he decided to retire from coaching so he could have more time with family and spend this past year watching his son play college hockey one last season in Wisconsin.

"I really wanted to be a dad this past year and be there for as many games that I could and enjoy watching him play … It was a thrill for both of us," said Van Diest, who was put on a one-year contract by Carroll to stay on board and be an ambassador. That contract expired on New Year's Eve. "It has been a good experience, but I really miss coaching."

Most recently, in 2019, both the NAIA and Carroll College enshrined him into their respective Hall of Fames. After the 2005 championship season, he had the honor of coaching the Hula Bowl. The American Football Coaches Association (AFCA) named Van Diest National Coach of the Year in 2003, 2005, 2007 and 2010.

Van Diest played for the University of Wyoming Cowboys from 1970-74. He later coached for his alma mater — first as a graduate assistant in 1976 when they went to the Fiesta Bowl as Western Athletic Conference (WAC) champions, then as an assistant head coach under Dana Dimel (1997 and 1998) and Joe Tiller (1991 through 1996). Earlier in his career, Van Diest coached alongside University of Montana Head Coach Larry Donovan from 1980 through 1985.