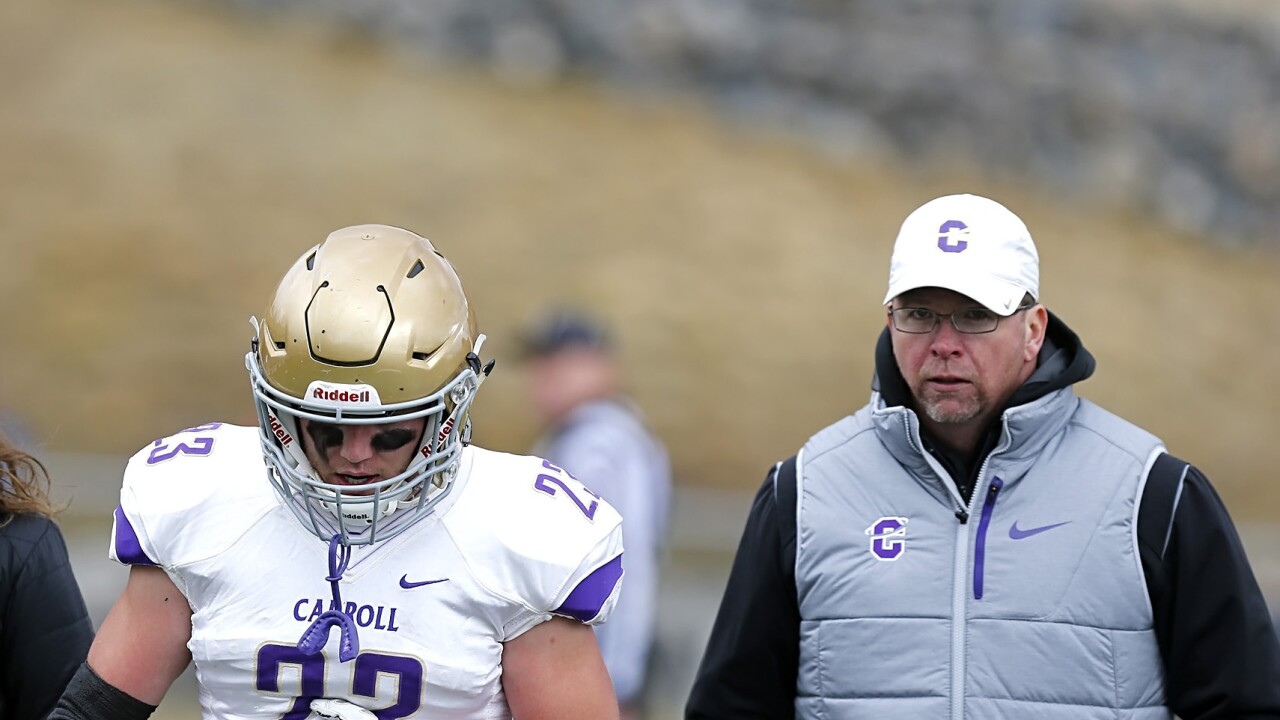 HELENA -- The highlights, amongst waves of memories, are tough to pick out for Brian Coble.

As he presses into an office chair in the PE Center and racks his brain, trying to boil down a 15-year career with the Carroll College Fighting Saints into a few moments, it becomes clear that the Saints have left as much of an impression on him as he has with them.

Coble is departing Carroll College this month for a job at Chapin High School in South Carolina, marking the end of his duty with the Saints, which began back in August of 2004.

“Brian has given so much to Carroll College and has served the student-athletes with great care through the years,” Saints Athletic Director Charlie Gross said. “I was always very confident that our student-athletes were in good hands with Brian providing leadership to our athletic training needs. We are going to miss Brian!”

As rewarding as working in athletics can be with the successes, competition, and fun, Coble knows it’s the people that made his time at Carroll special.

“Everything we do is for the athletes,” Coble said. “To see them grow up. There’s a couple of cases… There’s an Andrew Lopez, watching him mature and change his life. I think he was a captain his senior year and he matured and he went into the army after graduating. Seeing kids like that… That was always fun just watching the athletes change and grow up to some degree.”

When Coble came aboard in 2004 under then-Athletic Director Bruce Parker, he was the only athletic trainer on staff, serving a football team in the midst of a dynasty, a men’s basketball program making deep runs into March, a women’s soccer team that was making waves nationally, among other stellar achievements. Aside from the team success, he also led a staff that grew to a two-person team the next year, which has been the minimum up until the present day three-person crew.

While Helena has become home to the Cobles for the past 15 years, the opportunity in South Carolina proved too good to be passed up.

While preventive sports medicine is paramount to any college athletics program, Coble takes pride in his work with athletes bouncing back, some better than ever, after gruesome and potentially career-ending injuries.

“Dane Broadhead, Drew Melton... to watch those athletes work hard and see those guys come back from so much... Alex Hurlbut, to come back and play and have success, that’s probably the icing on the cake for sure,” Coble said. “Really, it’s our work and it’s us just guiding the athletes. They put in the work.”

It’s part of the reason when he thinks back about his favorite memories it’s impossible to rank them.

Coble recalls being with the outdoor track championship in 2015 when Janie Reid made her nationals debut. Reid qualified for nationals in the 10,000-meter run, but only after competitors with better marks dropped from the race. He remembers seeing the would-be All-American lag behind in the early going before picking off runners each lap, capping it off with an eighth-place finish.

“She was in last and we keep watching her and she keeps passing people,” Coble said. “We’re cheering and screaming. She makes All-American. She wasn't even supposed to be there by the national standards. She gets eighth. Just amazing.”

And then there’s his inaugural season as the head trainer when the Saints football team stormed into the 2004 NAIA championship. Coble had heard the legend of Tyler Emmert and the never-say-die Fighting Saints, but standing on the sidelines and seeing their unflappable nature brought the legend to life.

“A minute to go, there was never a doubt they weren’t going to win that game,” Coble said.

The Saints trailed Saint Francis 14-12 with about a minute left. Undeterred, Carroll drove and Marcus Miller, then a freshman, nailed a 32-yard field goal to seal the Saints’ third consecutive national championship.

Months later that same sports year, Coble was in Kansas City, Missouri, with the Saints men’s basketball team, which made a run into the Fab Four of the NAIA Tournament, the first in the program’s history.

“That was a crazy year,” Coble recalled. “I think women’s soccer did well that year. Women’s basketball was cruising. It was a special time.”

As the Saints continue to make memories, Carroll College wishes him well as he continues his athletic training career with a new, promising opportunity back in his home state of South Carolina.