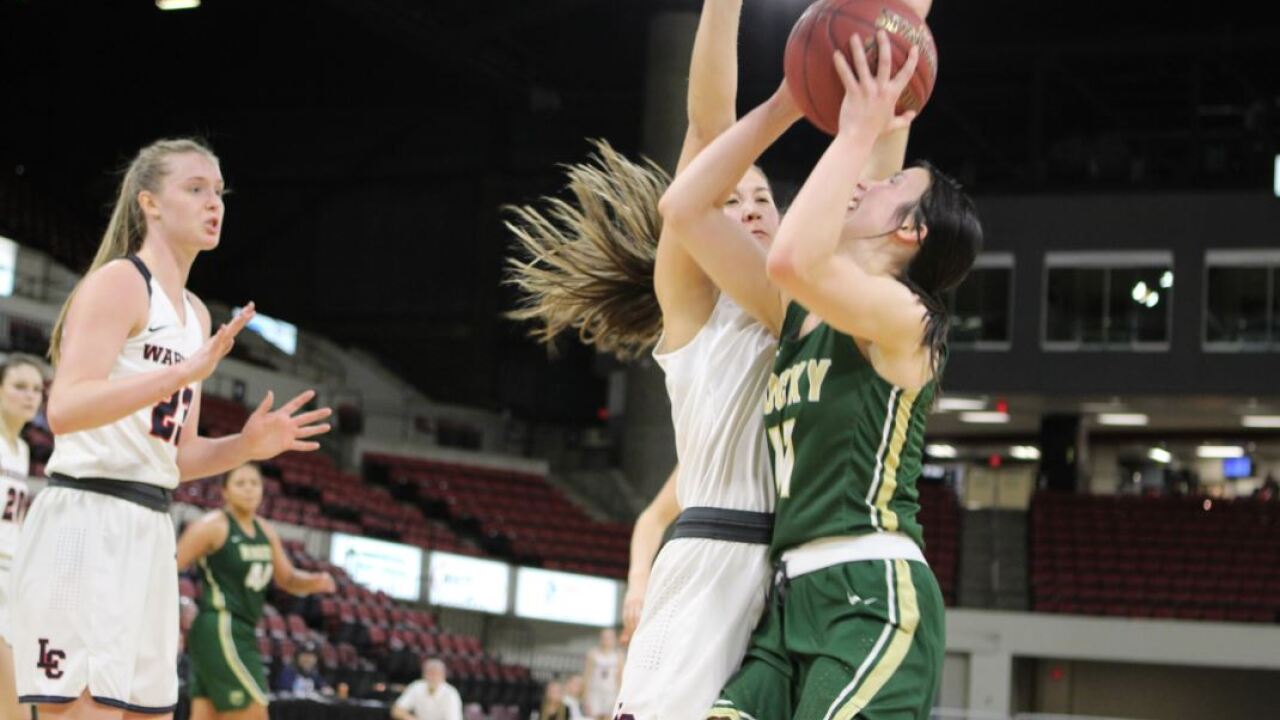 RMC Athletics
Rocky&#39;s Kloie Thatcher battles to get a shot off against Lewis Clark State.

KANSAS CITY, Mo. -- The NAIA released a statement on Wednesday evening that it will limit attendance at the upcoming national basketball tournaments in Billings and Kansas City.

The statement also announced limited attendance at all winter championship events, including the inaugural men's and women's bowling championships.

“After a thorough examination of the widespread health risks posed by COVID-19, the NAIA has decided to restrict attendance at upcoming championships to only essential staff and limited family members,” said NAIA President and CEO Jim Carr in the release. “We know this is disappointing to participating student-athletes and fans, but the health and wellness of all those involved with our championship events is our top priority.”

Attendance at current championship events will continue without restrictions, according to the release, but fans are encouraged to consider their options, as well. The NAIA will offer refunds to those fans who have already purchased tickets for championships events, but can no longer attend.

BILLINGS -- Officials with the NAIA national office are currently meeting to decide what measures to take in order to balance the execution of the national championships (Division I and Division II in Sioux Falls, Kansas City and Billings) and the health of communities, student-athletes, officials, fans and workers, according to a late afternoon email from Alex Tyson, executive director of Visit Billings.

Tyson added that she and Rocky Mountain College athletic director Jeff Malby will confer with NAIA decision-makers later this evening. Rocky is the tournament's host team for the fourth and final year.

"At this time, the two major considerations are to hold the event, but limit the number workers, fans, etc., as the NCAA will, or cancel the tournament(s). However, there are many other scenarios being discussed," Tyson added. "There are many questions, but at this time, this is where we are and we will get answers to our questions shortly and have a greater understanding of the NAIA’s plan and needs."

Earlier Wednesday, the NCAA announced that only a limited amount of staff and team family members will be allowed to enter this year's NCAA men's and women's national tournaments due to ongoing concern over the spreading of Coronavirus (COVID-19).

RodeoHouston, one of the nation's longest-running and highest paying rodeos, announced Wednesday that it will discontinues this year's event after 14 cases of COVID-19 have been confirmed in the Houston area. That rodeo started March 3 and was scheduled to run through March 22.

Thursday night's NBA game in Oakland between the Golden State Warriors and New Jersey Nets will also be played without fans in attendance over the same concerns.

"We know there are people on both ends of the spectrum," said Tyson of Wednesday night's NAIA discussions. "Some who believe the NAIA should have already canceled the event in Billings and others who can’t believe it’s under contemplation. It’s a difficult position for all of us with so many factors, but the health of our friends, neighbors, communities and student-athletes is and will be the priority for the local tournament committee, the NAIA, our lodging partners and supporting organizations."