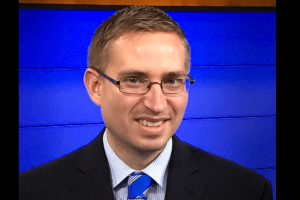 Dan Dragan came to Q2 from Milwaukee, Wis., in the summer of 2014. He started as a news assistant and has since developed into a sports reporter role.

You can see him every so often on the 5:30 p.m. and 10 p.m. sportscasts when the heavy-hitters (Scott and Casey) are off, but most of his work is done behind the cameras.

His love for sports started early, just ask his neighbors. His not-so-proud moment came when he was 10 years old: After a Packers last-second loss to the Colts, he stormed out of the house and, in hopes of showing the Packers how to kick a field goal, he decided it was a good idea to kick a light post. He quickly found out that wasn’t so smart, as it resulted in a broken toe.

In high school, he played golf and tennis, but soon realized his love for sports did not equal talent, and it was then he decided for a career in covering sports.

Dan graduated from Marquette University in 2008 with a Bachelor’s Degree in Broadcasting and Electronic Communications. For those that don’t know, Marquette is located in Milwaukee and has seen the likes of Dwayne Wade, Doc Rivers and even Chris Farley pass through its doors.

While at MU, Dan worked in the radio and TV departments and even tried his hand at play-by-play for Marquette basketball and soccer.

Upon graduation, Dan started working in radio with ESPN Wisconsin. During his time at ESPN, he was fortunate enough to cover games for the Brewers, Packers and Bucks. He has met the likes of Aaron Rodgers, Prince Fielder, and Ryan Braun, but he says his favorite athlete to cover was Stephen Jackson — you never knew what would come out of his mouth. His highlight during his six years at the station was leaving the Bradley Center after Game 3 of the Bucks-Heat playoff series sandwiched between LeBron James and Dwayne Wade. Word has it they were quite a bit taller than Dan, who stands at 5-foot-8 on a good day.

And that is how he ended up here at KTVQ. He is excited to be part of the Q2 family and looks forward to what the future will bring.

Oh and yes, his last name is pronounced Dragon!