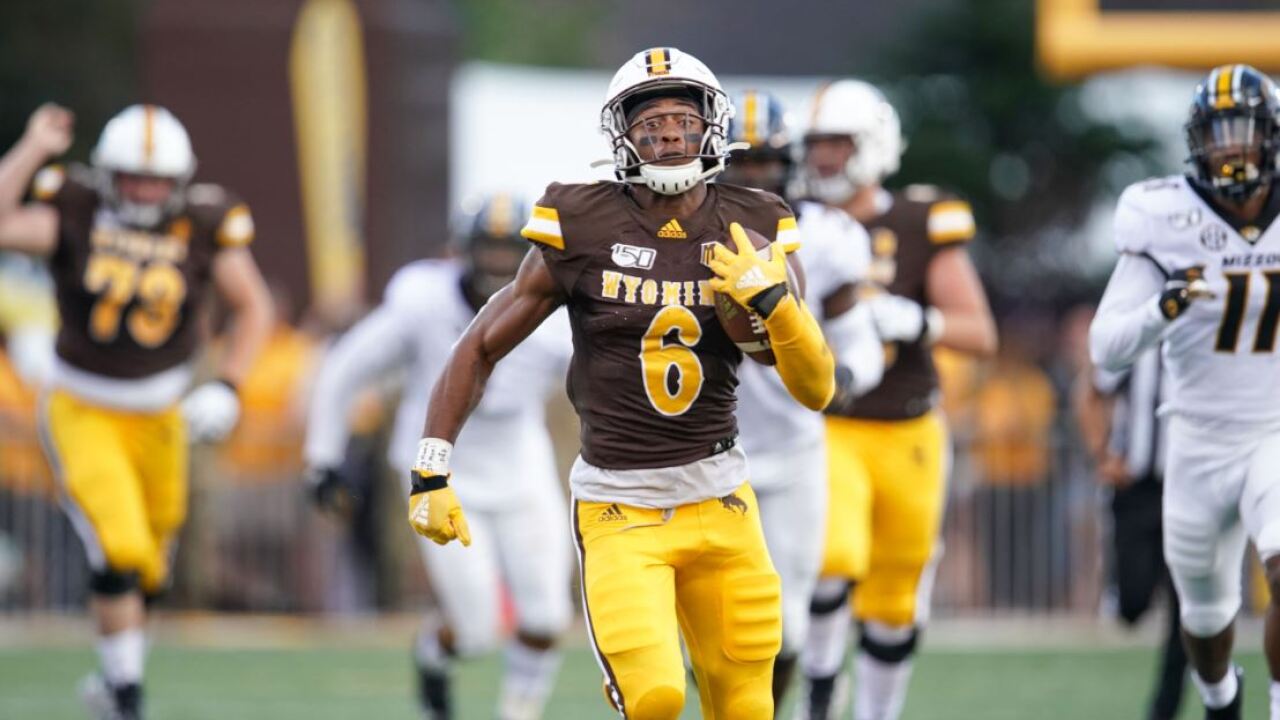 LARAMIE, Wyo. - The revised 2020 University of Wyoming Football schedule was released by the Mountain West Conference on Thursday. That eight-game schedule features five games against opponents who played in the postseason last year, including four home games versus postseason teams highlighted by home contests against both 2019 MW Division Champions Hawai’i and Boise State.

Breaking Down the 2020 Wyoming Football Schedule

∙Wyoming’s season will kick off on the road at Nevada on Saturday, Oct. 24. The following week, the Pokes will host the first of four home games versus the Hawai’i Rainbow Warriors, who won the MW West Division in 2019 and defeated BYU, 38-34, in the SoFi Hawai’i Bowl. Wyoming’s other home games will be on Nov. 14 vs. Air Force, Nov. 21 against Utah State and Dec. 12 vs. defending Mountain West Champion Boise State.

∙In addition to their season-opening road game at Nevada on Oct. 24, the Cowboys will travel to Colorado State on Nov. 7, to UNLV on Nov. 28 and to New Mexico on Dec. 5.

∙All game dates are tentative and subject to change.

∙The Wyoming Cowboys are coming off an 8-5 season and a postseason win in last year’s NOVA Home Loans Arizona Bowl (38-17 over Georgia State). Wyoming was a perfect 6-0 in home games last season. Over the past four seasons, the Cowboys have achieved bowl eligibility in each of those four seasons, have earned three bowl bids during that time (2016, ‘17 and ‘19), won two bowl championships (2017 and ‘19) and hosted one MW Championship Game (2016).

∙As the 2020 college football season approaches, the Wyoming Cowboys will be seeking their fourth bowl bid in five seasons. That would be a first in Wyoming Football history.

Wyoming’s 2020 Opponents Who Appeared in Postseason a Year Ago

∙The five Wyoming opponents who appeared in bowl games last season include the Nevada Wolf Pack, who played in the 2019 Famous Idaho Potato Bowl, losing to Ohio (21-30). Hawai’i participated in the MW Championship Game, losing to Boise State (10-31), but then bounced back to win the SoFi Hawai’i Bowl over BYU (38-34). Air Force defeated Washington State (31-21) in the Cheez-It Bowl. Utah State appeared in the Tropical Smoothie Cafe Frisco Bowl, losing to Kent State (41-51). Boise State defeated Hawai’i (31-10) in the MW Championship Game and advanced to the Mitsubishi Motors Las Vegas Bowl where they lost to Washington (7-38).

∙Game dates are tentative and subject to change. Some games may be moved to other days of the week

+The Mountain West Football Championship Game will be played at the home stadium of a Mountain West Conference school based on the current MW policy in place to determine the host team.

Home Opener vs. Hawai’i Will be the First Visit by Rainbow Warriors Since 2017 Overtime Win by the Cowboys in War Memorial Stadium

∙Wyoming is scheduled to host Hawai’i on Halloween this year. The last time the two teams played in Laramie was Sept. 23, 2017. The game ended in regulation tied at 21. In overtime, Wyoming quarterback Josh Allen hit wide receiver James Price on a 25-yard touchdown pass on the Cowboys’ first play in overtime. On Hawai’i’s first OT possession, they rushed for 10 yards on first down to the 15-yard line, but then Cowboy linebacker Cassh Maluia would intercept Hawai’i quarterback Dru Brown on the next play to seal the 28-21 OT win for the Pokes.

November Will Bring Home Games vs. Air Force and Utah State to Laramie

∙Who could forget the furious come-from-behind win by the Cowboys over Air Force in the Falcons’ last visit to Laramie in 2018. In one of the great comebacks in Wyoming history, the Cowboys scored three touchdowns in the final five minutes of the game to erase a 27-14 deficit and turn it into a 35-27 home victory on senior night.

∙Wyoming and Utah State will battle for the “Bridger Rifle” traveling trophy on Nov. 21 in Laramie. The two teams will be meeting for the 71st time in history.

Wyoming Will Conclude the Regular Season on Dec. 12 in War Memorial vs. Boise State

∙The Cowboys will conclude the regular season versus the Boise State Broncos. The Cowboys and Broncos have had a number of close games in recent years. Last year, the Pokes took Boise State to overtime before losing (17-20) on the road in Boise, Idaho. In 2016, the Cowboys prevailed in Laramie (30-28) on a safety by nose tackle Chase Appleby.

∙The 2020 Mountain West road schedule for the Pokes will include a trip to Nevada to start the season on Oct. 24. On Nov. 7, UW will play Colorado State in the 112th edition of the Border War in Fort Collins. UW will make a second trip to the state of Nevada on Nov. 28 when they will play the UNLV Rebels in Las Vegas. The regular-season will come to an end on Dec. 5 in Albuquerque against the New Mexico Lobos.

∙The Wyoming Cowboys are coming off their fourth consecutive season in which they earned bowl eligibility.

∙The Cowboy offense returns three outstanding running backs in First Team All-Mountain West selection and junior Xazavian Valladay, graduate transfer Trey Smith and sophomore Titus Swen, who all recorded 100-yard rushing games in 2019. Valladay rushed for 1,265 yards as a sophomore. Smith was granted a medical hardship and an additional year of eligibility by the NCAA to return to the Cowboys in 2020.

∙On defense, nine players with starting experience return from a Cowboy defense that ranked No. 11 in the nation in scoring defense, allowing opponents only 17.8 points per game. That defensive unit will be led by the likes of senior defensive end Garrett Crall, junior nickel back Keyon Blankenbaker, junior cornerbacks Azizi Hearn and C.J. Coldon and junior linebacker Chad Muma.