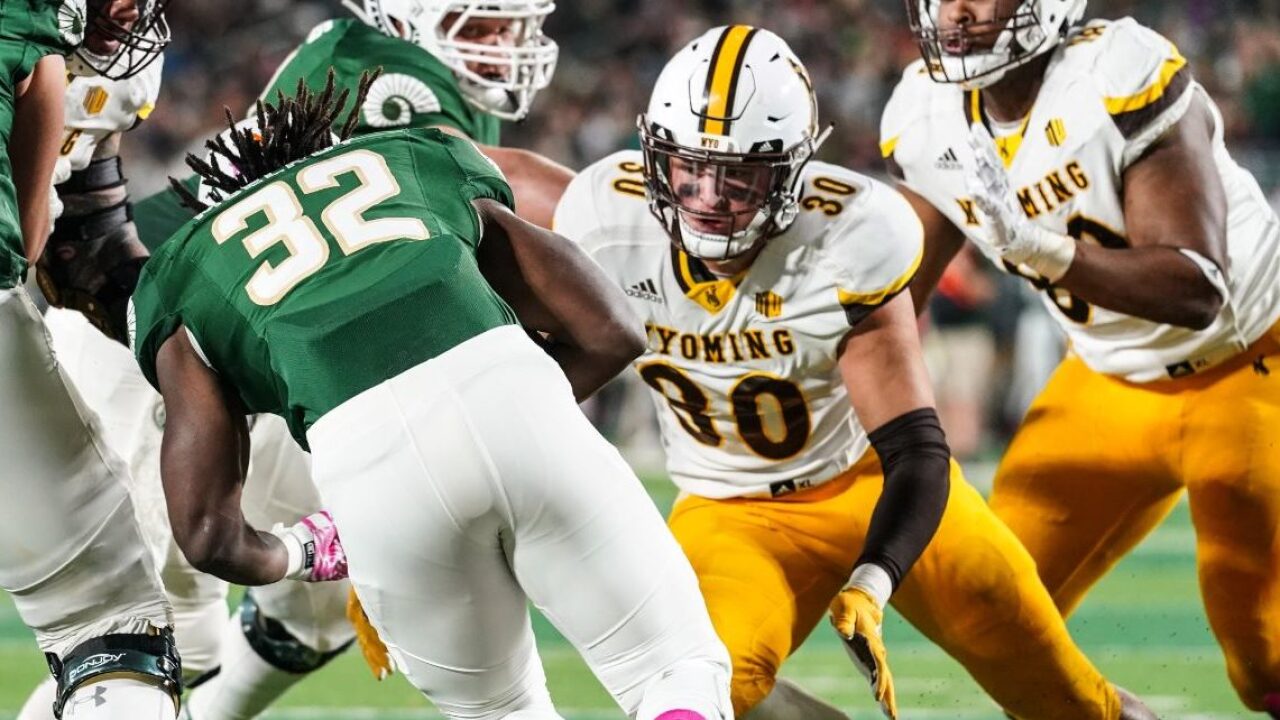 LARAMIE, Wyo. – The Wyoming Cowboys (3-1 overall) open up Mountain West play hosting UNLV (1-2 overall) on Saturday at 6 p.m. inside War Memorial Stadium. Wyoming Athletics is asking all Cowboy fans to participate in the "White Out" of War Memorial Stadium by wearing White t-shirts. The goal is to have the entire stadium blanketed in white.

MW Opener
The 2019 season marks the 21st season of the Mountain West Conference, and this year’s Wyoming-UNLV contest is the first conference game of the year for both the Cowboys and the Rebels.

The Cowboys have won 4 or their last 6 MW openers, and 3 of 5 in the Craig Bohl era.

This year’s MW opener will mark the third time in the 21 seasons of the MW that the Cowboys have opened Mountain West Conference play against UNLV. The Rebels, like the Cowboys, were original members of the Mountain West.

The duo of senior linebacker Logan Wilson and senior safety Alijah Halliburton have been quite the duo this season defensively. In fact, Wilson and Halliburton are the only teammates in the nation that average double-digit tackles. Halliburton leads the Cowboys in tackles with 43 on the season to rank No. 13 in the nation. Wilson has added 41 tackles on season ranking No. 19 in the nation. The duo has been involved with 27 percent of the defensive plays for the cowboys this season.

Redshirt freshman Solomon Byrd is having quite the season so far for the Brown and Gold. Through three games he has 12 tackles with four of those tackles being tackles for loss. Byrd also leads the Cowboys with 3.5 sacks for the season. His 1.17 sacks per game ranks second in the MW and eighth in the nation. At Tulsa, Byrd finished the contest with six tackles with 2.5 sacks. He also forced a fumble in the contest and recovered the ball as well.

The Cowboys have also pressured the quarterback this season. Wyoming has 18 sacks for the season, which leads the Mountain West and ranks fourth in the nation. Wyoming recorded seven sacks in the contest against Tulsa. Wyoming is averaging 4.5 tackles for loss on the season, which is the highest number in the Craig Bohl era.

The Pokes have been active in the passing game this season. Wyoming has broken up 25 passes for the season for 2.25 per game. Last season, the Pokes broke up 51 for the season, as Wyoming is nearly averaging two more break ups per game than last season.

About UNLV
The Rebels head into Laramie with a 1-2 overall record after a bye week this past weekend. UNLV earned a win over Southern Utah (56-23) in the season opener then fell to Arkansas State (43-17) and at Northwestern 30-14 on Sept. 14.

UNLV averages 29 points per game on the season and allows 32 points per game. The Rebels average 388 yards of total offense per game rushing for 243 yards per game and passing for 145 yards. UNLV allows 426.7 yards of total offense per game, as the opposition throws for 248 yards per game and rushes for 178.7. UNLV is getting outscored 33-7 in the fourth quarter this season, but has scored 38 points in the second frame for the season.

The Rebel offense is paced by quarterback Armani Rogers. He has rushed for 175 yards to rank second on the team and is 35-of-66 passing for 102 yards per game. He has two interceptions and a touchdown pass this season. Running back Charles Williams is one of the nation’s top runners rushing for 151.7 yards per game on the season with six touchdowns. Wide receiver Randal Grimes leads the team with eight catches for 109 yards with a touchdown.

The UNLV defense is paced by safety Evan Austrie, as he has a team high 25 tackles including a sack. Linebacker Rayshad Jackson has 24 tackles on the season with 2.5 tackles for loss and is tied for the team lead with three pass breakups.

Kicker Daniel Gutierrez is 1-of-2 on field goals this season with a long of 27 yards. Punter Hayes Hicken averages 44.9 per punt for the season.