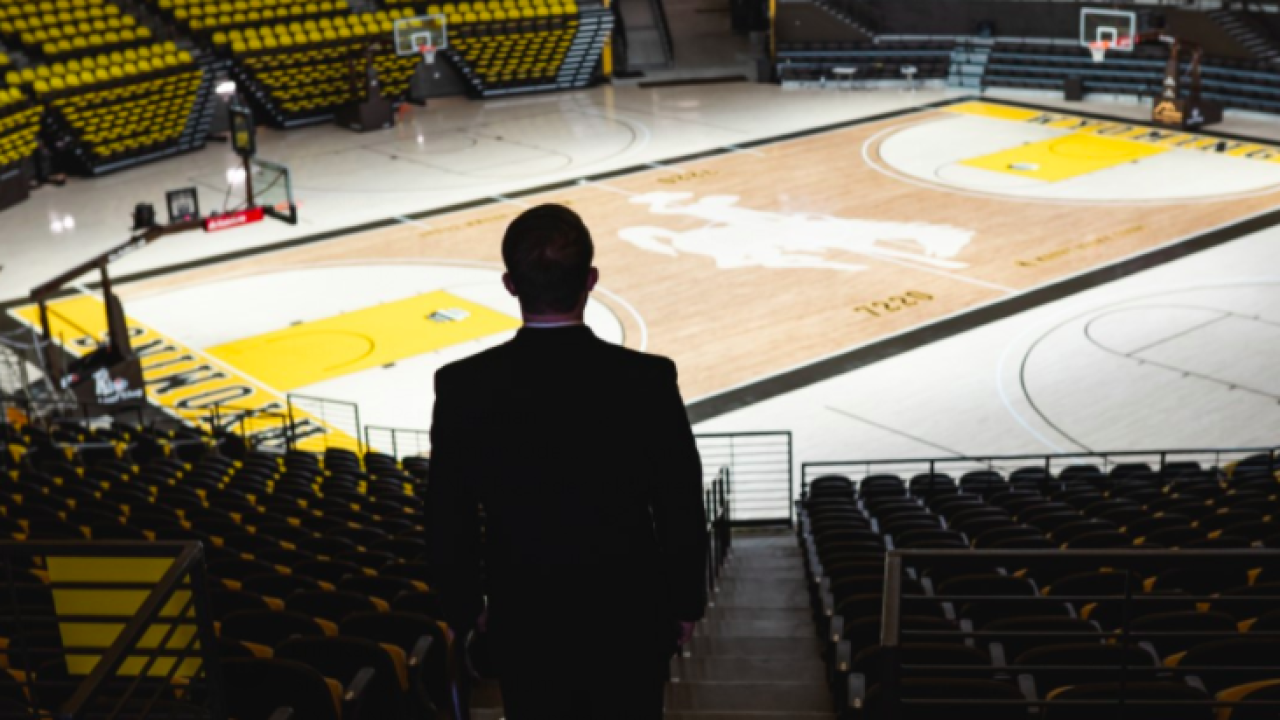 LARAMIE, Wyo. - The University of Wyoming men's basketball team has been picked to finish ninth in the Mountain West, as the conference announced its 2020-21 preseason media poll and all-conference team prior to the start of Wednesday's MW Virtual Media Day. The Cowboys garnered 59 points from media in the MW.

Wyoming welcomes eight newcomers to the 2019-20 roster, as the signing class was the top ranked class in the Mountain West and ranked No. 53 in the nation according to Rivals.com. That group featured four three-star recruits and a trio of junior college student athletes.

San Diego State has been predicted to claim the 2020-21 Mountain West regular-season title as voted by the Conference media and announced Wednesday morning ahead of the league's men's basketball virtual media days. The Aztecs captured the 2019-20 MW regular-season title with a 17-1 league mark.

Coming off a historic season in 2019-20, San Diego State received 14 first-place votes, earning 211 points. The Aztecs have been selected as the Conference's preseason favorite seven times since 1999. SDSU returns three starters, including 2019-20 All-MW first team selection Matt Mitchell, and a total of eight letterwinners from last year's roster that finished with a 30-2 mark.

UNLV was chosen to finish fourth with 160 points, Colorado State in fifth with 141 points, Nevada in sixth with 114 points, New Mexico in seventh with 106 points, Fresno State in eighth with 93 points, Wyoming in ninth with 59 points, Air Force in 10th with 39 points and San José State in 11th with 32 points.

The preseason team, as selected by members of the media, is made up of two seniors, two juniors and a sophomore. Of the seven preseason honorees, five earned all-conference accolades at the end of 2019-20.

Preseason Player of the Year

Preseason Newcomer of the Year

Preseason Freshman of the Year

In addition, the Cowboys announced the signing of two players to the 2021-22 roster.

"In our program we label players as LIVE IT, LOVE IT, or LIKE IT based on their passion for basketball," Linder said. "We identified two players in the early signing period in Ben and Nate that LIVE IT. When you're trying to recruit during a pandemic you have to really do your homework as a coaching staff to evaluate who you're really trying to recruit. It didn't take long to figure out with both players to realize that they LIVE the game based off their actions during the pandemic. When a lot of players found an excuse to not work on their games during the last eight months Ben and Nate were seeking out ways to get better. When you factor in their work ethic with the character that was instilled in them by their parents and coaches, we are getting two young men who will represent the University of Wyoming with pride and passion on and off the court."

Barnhart is entering his senior season at DeSoto High School under head coach Matt Rice. Barnhart was ranked as a three-star recruit by Rivals.com. The website also named him the 39th best center in the signing class. He will become the first seven-footer on the Cowboy roster since Boubacar Sylla during the 2009-10 season. Last season, Barnhart earned Second Team All-State by Topeka Capital Journal averaging 13.2 points per game to go along with 8.2 rebounds per game and 3.4 blocks per night. He was named the Best of Kansas Preps All-Star and Kansas Pregame All-Star. He was named First-Team United Kansas Conference.

He played for KC Run GMC during the AAU season under coach LJ Goolsby. That team was a part of the Under Armor Association.

He is the son of Brian Barnhart and Jenny Barnhart.

"You don't come across too many players who are seven feet tall who can pass, handle, shoot and love to play," Linder said. "Luckily, we came across just that with Nate! The more people that we talked to that interacted with Nate on a daily basis the more we got excited. The one constant from everyone we spoke to was that he was always working to get better. He knows that his body will need to develop, but his passion for the game will give him a chance to be a rare player who can stretch the defense from the perimeter while still protecting the interior with his length and athleticism. Nate has a tremendous future ahead of him and we cannot wait to see him in the Brown and Gold!"

"We are immensely proud of Nate and his commitment to the University of Wyoming. He has been a difference maker for us since he walked through our doors and we will miss him as he moves on to greater things. The University of Wyoming is getting a good one. His character and work ethic are top notch. He will make the university and it's supporters proud just as he has made us proud. His best basketball is ahead of him. We can't wait to watch him grow as a player at Wyoming!"

"Nate is someone who has worked very hard to put himself in this situation. He will be a great fit for Wyoming. With tremendous upside and size, along with his work ethic he will thrive throughout his collegiate career."

Bowen is entering his senior season at Mountain Vista High School playing for head coach Brian Wood. As a junior, Bowen averaged 16.5 points per game to go along with 4.2 rebounds per game and 3.4 assists per game. He shot an impressive 48 percent from the field for the season and added 31 triples on the season. He led his team to an 8-2 record in the Continental League. In the state tournament, Bowen scored 27 points in a contest against Rangeview High School.

He played for the Colorado Hoops Academy during the AAU season.

He also was recruited by Central Michigan and Denver.

"Ben is the classic late bloomer who won't turn 18 until once he has arrived at the University of Wyoming," Linder said. "When you're trying to project what a player can become Ben checks a lot of boxes of someone who can become a really good college basketball player based off what he is now but could become a really special player if he continues to grow and body develops. Ben reminds me a lot of former Cowboy, Hayden Dalton, who back when the Cowboys signed him out of junior college a lot of people didn't see the player that ultimately, he would become. We are so excited for the opportunity to help Ben continue to grow and develop as a student-athlete at the University of Wyoming."

"The Vista family is super excited for Ben to take his game to the next level with the great coaching staff at The University of Wyoming. Ben is the most talented offensive player we've ever coached and has an old-school love for the game. He is a great player, a great leader, and most importantly, a great person. "