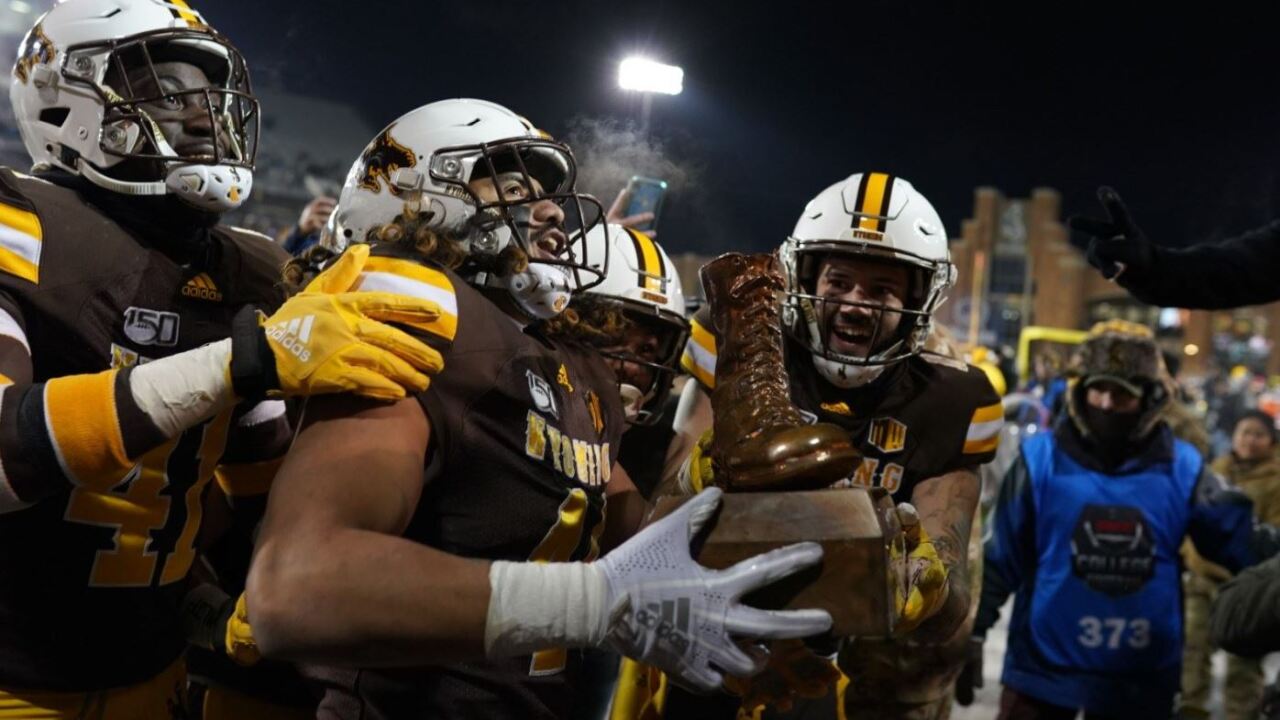 TUCSON, Ari. - The Wyoming Cowboys capitalized on turnovers and recorded a season-high 524 yards of total offense in a 38-17 win over Georgia State in the NOVA Home Loans Arizona Bowl in Arizona Stadium in Tucson. Sophomore running back Xazavian Valladay was named the Offensive MVP and senior safety Alijah Halliburton earned Defensive MVP honors.

Valladay rushed for 204 yards for his six 100-yard rushing performance this season and second 200-yard game. He also added three receptions for a career-high 91 yards for a season-high 296 yards of all-purpose yardage. Valladay also scored a receiving and a rushing touchdown for the Cowboys. Halliburton added an interception that setup a score and finished the game with 11 tackles.

"First of all, great ballgame," said Wyoming head coach Craig Bohl. "Sometimes when you get in games like this it is too bad a team has to lose. But we want to say congratulations to the phenomenal year that Georgia State had. And I think they had a quarterback who was able to go out and do a gutsy performance on a torn ACL, really speaks to their competitive nature.

"That being said, this team that we have this year has been a resilient team. They've played together as a team. A lot of big plays tonight and there have been big plays all year long. This capped off an excellent year. I couldn't be more proud of our seniors and the guys who are also up here on the stage with me."

Freshman quarterback Levi Williams threw for a career-high 234 yards in his first career start. He added three touchdown passes for the most in a game since Josh Allen had three in the Famous Idaho Potato Bowl in 2017.

"He (Levi Williams) was composed, made a lot of big plays," said Bohl. "He had a couple of things that we wish we could have had back, but for a freshmen or for any quarterback I thought he played with great poise and composure. And to say that Brent Vigen (Wyoming offensive coordinator) did a great job with him is an understatement. Some people may think it was a bold step, playing a freshman quarterback. It really wasn't, in effect. I thought it was the right move. It was great experience for him and we're glad that he's here."

Senior Logan Wilson added seven tackles in his final game for the Brown and Gold. The Wyoming native finished his career with 421 tackles and three-straight 100-tackle seasons.

When asked about what Wilson, a Casper, Wyo. native, has meant to the Wyoming football program, Bohl said, "I think it's a message for all our players. All our players are important, and they come from all different kinds of places. But time and time again, when I first got the job some people and some coaches said that you couldn't win with Wyoming players. I say we can't win without them. I had a chance to visit with Coach (Steve) Harshman (head coach at Casper's Natrona County High School) about that when his son Josh came into our program with Logan (Wilson). Logan has worked really hard to develop his skill set. And I think he's going to continue to play football at the next level. I guess it's a refreshing example for a lot of our youngsters that are in the state of Wyoming that you too can have an opportunity. Maybe you're not going to come in and do the things that Logan's done, but we're always going to look for players within the state. And it's sure been great to have guys that are within the state. I think Logan's really represented the state well."

Wyoming's passing attack featured seven different receivers who had catches on the day. Wyoming also finished the contest 11-of-17 on third-down conversions. The Cowboy defense held Georgia State to only 355 yards of total offense, which was nearly 100 yards below their season average.

Georgia State wasted little time getting on the board going 75-yards on six plays to open the game and took a 7-0 lead on a four-yard run from quarterback Dan Ellington. Ellington rushed for 45 yards on the opening drive to set up the score.

"Anytime you go out and you're playing against an offense, sometimes the speed of the game has an impact," said Bohl. "Georgia State did a couple things with play-action that threw us off a bit, and kudos to them. I thought our players responded well. Coach (Jake) Dickert and the rest of the group did a nice job. And there were a lot of times today where our defense had to come up with some big stops, and they certainly did."

Wyoming got on the board the following drive with a 53-yard field goal by Cooper Rothe on the Cowboys' first possession. It was a career long field goal for Rothe. It was also the longest field goal by the Cowboys since a 57-yarder by Billy Vinnedge against Air Force in 2007. Rothe's field goal made it a 7-3 game with 9:01 remaining in the opening frame.

The Pokes stormed to the lead with a pair of scores in the closing minutes of the first quarter to take a 17-7 lead. Redshirt freshman Rome Weber picked up what looked to be a fumble but was later ruled an incomplete pass on a fourth-down attempt by Georgia State. That was followed up by Williams finding Austin Conway for Williams' first touchdown pass of his career and first touchdown catch of the season for Conway.

Wyoming's second score came less than two minutes later after senior safety Halliburton recorded his second interception of the season and returned it to the GSU 11-yard line. Williams found Valladay on an eight-yard pass for the score for Williams' second touchdown pass of the day.

In the postgame press conference, Halliburton responded to a question about what this win meant to him, his team and his senior class. "This game was really important," said Halliburton. "After this, I don't even know if I'm going to be playing football, so it was really a big game for all -- especially the seniors -- because some of us don't know if we're going to be playing anymore football. To get this 'W' especially for this program, this university, is very important."

The Panthers would add a field goal in the second quarter, and it looked like it would be a one-score game going into halftime, but a roughing the punter penalty against Georgia State would turn into a 51-yard touchdown pass from Williams to Ayden Eberhardt to make it a 24-10 game with 32 seconds remaining in the first half, and that would be the score as the half would come to an end.

"It was a big, big play," said Bohl. "He (Eberhardt) just kept on going. That was right before the half. I think there's a lot of plays that were key plays in the game, but that one certainly changed the complexion of the game. He's an excellent runner when he has the football. He's a complete wide receiver and that was a big play for us."

The Cowboys took a 31-10 lead on a one-yard touchdown run from Valladay with 8:12 left in the third quarter. Valladay set up the score for the Brown and Gold with a 63-yard reception, which was the longest of the season for the Cowboys.

Georgia State responded with a score less than a minute later, as Ellington found Corneilus McCoy for a 44-yard strike to make it a 31-17 contest. Wyoming's defense recorded a pair of fourth-down stops against the Georgia State offense after the Panthers reached the red zone twice in the fourth quarter. Williams added a touchdown run for Wyoming with 1:21 remaining in the game to give the Pokes a 38-17 bowl victory.

Wyoming finished the season with an 8-5 overall record tying for the most wins in the Craig Bohl Era with the 2016 (8-6) and 2017 (8-5) campaigns. The Cowboys are now 8-8 all-time in bowl games, and have won back-to-back bowl contests, including a win in 2017 in the Famous Idaho Potato Bowl. That marks the first back-to-back bowl victories for the Cowboys since wins in the 2004 Las Vegas Bowl and 2009 New Mexico Bowl.

Asked how important this win was for the Wyoming program, Bohl said, "Nothing spells success like having some success. And I think it sends a message to the younger players, if you work hard, stay focused and believe in the system, believe in what the coaches are telling you, that makes a difference. Also I think some of our captains were talking about how last year at this time we were bowl eligible and didn't get selected and so that was a real point of emphasis this season. It was important for us to finish the year off strong. I think we had some great wins this year but you always remember your last win. And so this was a great, great capstone to our season."