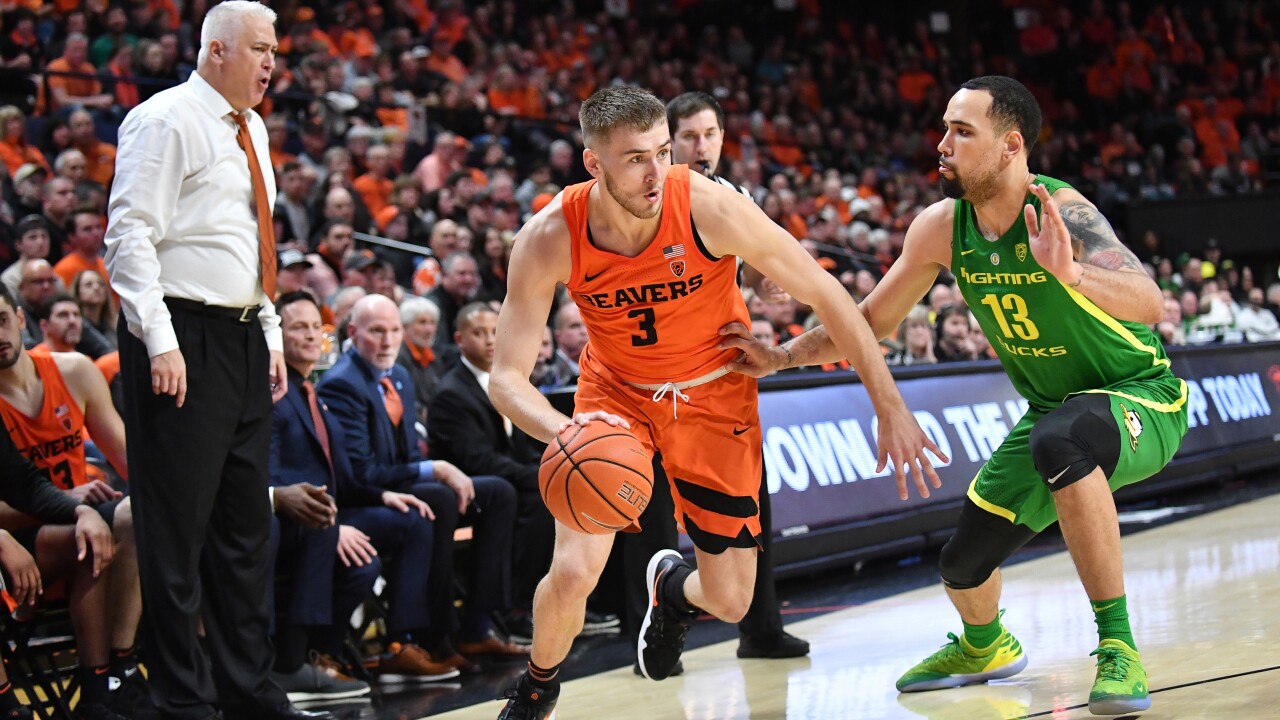 CORVALLIS, Ore. – Tres Tinkle was named one of 10 finalists for the 2020 Julius Erving Small Forward of the Year Award, the Naismith Memorial Basketball Hall of Fame announced Wednesday.

Named after Class of 1993 Hall of Famer and 16-year professional basketball player Julius Erving, the annual honor in its sixth year recognizes the top small forwards in Division I men's college basketball. A national committee comprising top college basketball personnel determined the watch list of 20 candidates in October, which has now been narrowed to just 10.

Tinkle, a former Missoula Hellgate star and Montana Gatorade boys basketball player of the year, is averaging 19.2 points, 6.8 rebounds and 3.6 assists per game for his coach and father, Wayne, at OSU. Tinkle holds season-highs of 27 points, 11 rebounds, seven assists, five steals and three blocks, while shooting 47 percnt from the floor and 79 percent from the free throw line. He has also connected on 33 percent of his 3-point attempts this season.

The Beavers are 13-9 overall and 3-7 in Pac-12 Conference play with a home game against rival Oregon looming on Saturday.

The Julius Erving Award
Julius Erving attended the University of Massachusetts and averaged 26.3 points and 20.2 rebounds per game, making him one of only six NCAA men's basketball players to average more than 20 points and 20 rebounds per game. After two seasons, Erving made the jump to the American Basketball Association and was the league's most recognizable player when it merged with the National Basketball Association in 1976. During his professional career, Erving won three championships, four most valuable player awards and three scoring titles. In 1996, he was named a member of the NBA's 50th Anniversary All-Time Team.

About the Naismith Memorial Basketball Hall of Fame
Located in Springfield, Massachusetts, the city where basketball was born, the Naismith Memorial Basketball Hall of Fame is an independent non-profit 501(c)(3) organization dedicated to promoting, preserving and celebrating the game of basketball at every level – men and women, amateur and professional players, coaches and contributors, both domestically and internationally. The Hall of Fame museum is home to more than 400 inductees and over 40,000 square feet of basketball history. Nearly 200,000 people visit the Hall of Fame museum each year to learn about the game, experience the interactive exhibits and test their skills on the Jerry Colangelo "Court of Dreams." Best known for its annual marquee Enshrinement Ceremony honoring the game's elite, the Hall of Fame also operates over 70 high school and collegiate competitions annually throughout the country and abroad. For more information on the Basketball Hall of Fame organization, its museum and events, visit www.hoophall.com, follow @hoophall and or call 1-877-4HOOPLA.