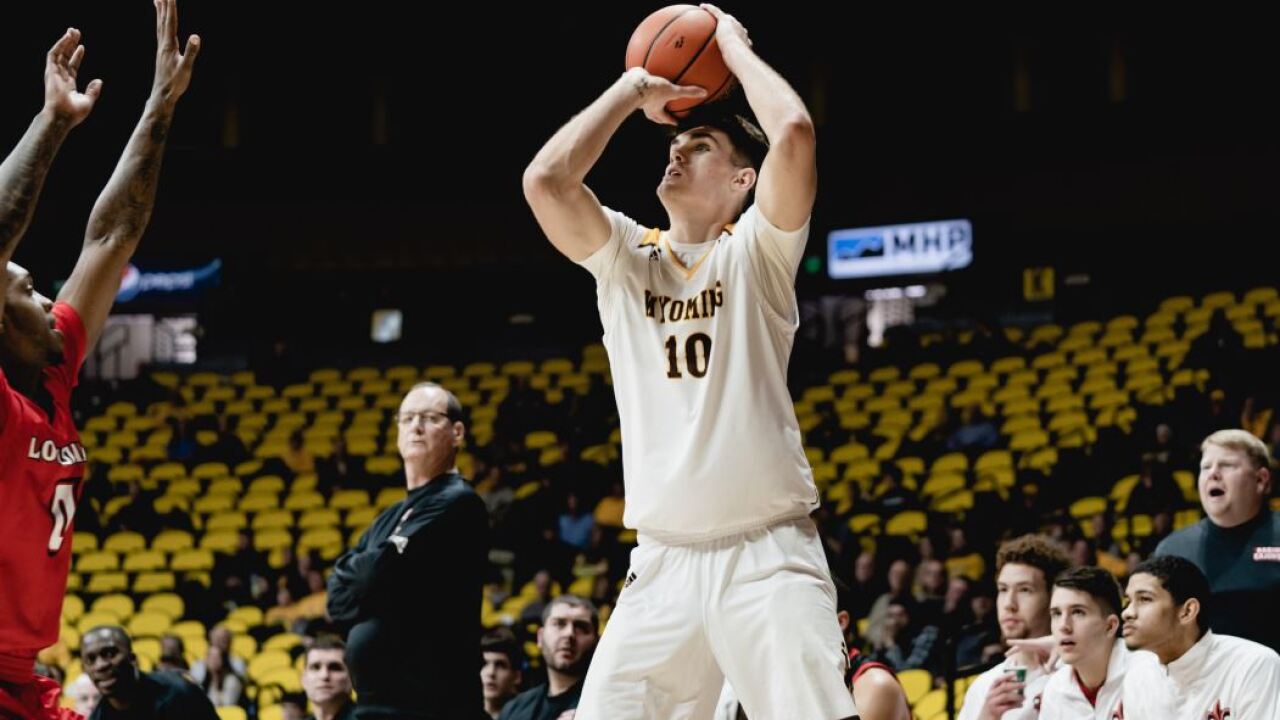 LARAMIE, Wyo. - The Wyoming Cowboys needed an extra five minutes Thursday night, but in the end, outlasted Louisiana 69-61 in overtime. Sophomore forward Hunter Thompson led the way with a season-high 22 points on 7-of-13 shooting, including a season-best four 3-pointers.

“Knowing Coach (Bob) Marlin and their (Louisiana’s) program during my time as an assistant at Western Kentucky -- he is a great coach and they are one of the best programs year in and year out in the Sun Belt,” UW head coach Allen Edwards said. “I told our guys that this is a really good win. “I was proud of our guys’ effort and energy and staying the course the entire night. Being somewhat of a young team and facing some adversity, having to go into overtime, it showed me that this team is taking steps in learning how to win.”

Head coach Allen Edwards moved to 8-2 in overtime in his career with the win. Wyoming was a perfect 3-of-3 from the field in overtime and knocked down 8-of-10 free throws in extra time to earn the win.

Thompson recorded 14 points in the second half and added seven points for the Pokes in overtime. He was 7-of-13 from the field for the night. Sophomore Trevon “TJ” Taylor and senior A.J. Banks added 12 points each. Banks also added three assists on the evening. Redshirt sophomore Hunter Maldonado added 11 points and a team-high four assists. He was held scoreless in the first half. Senior Jake Hendricks grabbed a career high 11 rebounds on the night.

“I thought we did it again defensively tonight,” Edwards said. “We had to step up offensively tonight. Hunter Thompson came out of his slump (scoring 22 points), which was huge. We had four guys in double figures, but what it really boiled down to was defense and rebounding the basketball.”

“One of the things we talk with our guys about is staying disciplined, playing tough on defense and then being able to work the ball on offense,” Edwards said. “I thought we stayed the course defensively and then in overtime we were a little more efficient than they were. Thompson hit a big three in overtime, and we played out of the post with Maldo (Hunter Maldonado) with was effective. I thought it was a good blue-collar win tonight.”

After a three pointer and layup by the Pokes to open the game in the opening minute, Louisiana went on a 10-0 run to take a 10-5 advantage with 16:38 left in the first half. The run was halted by a three-pointer from Hunter Thompson.

Wyoming would later go scoreless for over three minutes, as the Ragin’ Cajuns built an 18-11 lead halfway through the half. Thompson once again halted the run with a three pointer. The Pokes struggled holding on to the basketball with seven turnovers in the first 10 minutes.

The Pokes held Louisiana without a field goal for over three minutes and tied the contest at 19-19 with 7:46 left in the first frame. Banks hit a triple and a nifty layup from highlighted the run for the Brown and Gold.

Wyoming would earn the early advantage in the opening minutes of the first half thanks to sensational dunks from Taylor and Banks to make it a 39-37 Wyoming advantage.

The Pokes would force five turnovers over a five minutes stretch to build a 44-39 lead halfway through the half. The Wyoming defense also held the Ragin’ Cajuns to 2-of-9 from the field in the first 10 minutes of the stanza.

The Pokes went scoreless for over three minutes, which allowed Louisiana to tie the contest at 46-46 with 4:59 left in the game. Maldonado ended the drought with a layup for his first points of the contest. He would follow that by taking a charge the following possession and hitting a pair of freebies to build the Pokes’ lead to 50-46 with four minutes left.

Wyoming built a 53-48 advantage, but Louisiana battled back and hit a jumper to tie the contest at 54-54 with 24 seconds left. Wyoming had a chance to take the win, but Maldonado lost the ball on the drive, which sent the game to overtime.

The Ragin Cajun’ opened the overtime period in aggressive attacking the rim and connecting on three free throws to take a 57-54 lead.

Wyoming took control from there holding Louisiana to 2-of-8 from the field in overtime on their way to the 69-61 win. The momentum turned full when Thompson hit his fourth three of the game halfway through the extra frame.

The Ragin’ Cajuns were led in scoring by Kobe Julien with 15 points. Dou Gueye added 11 points and led the team with eight rebounds.

The Pokes return to action on Sunday at the MGM Main Event in T-Mobile Arena facing #23 Colorado at 6 p.m. MT on ESPN3.