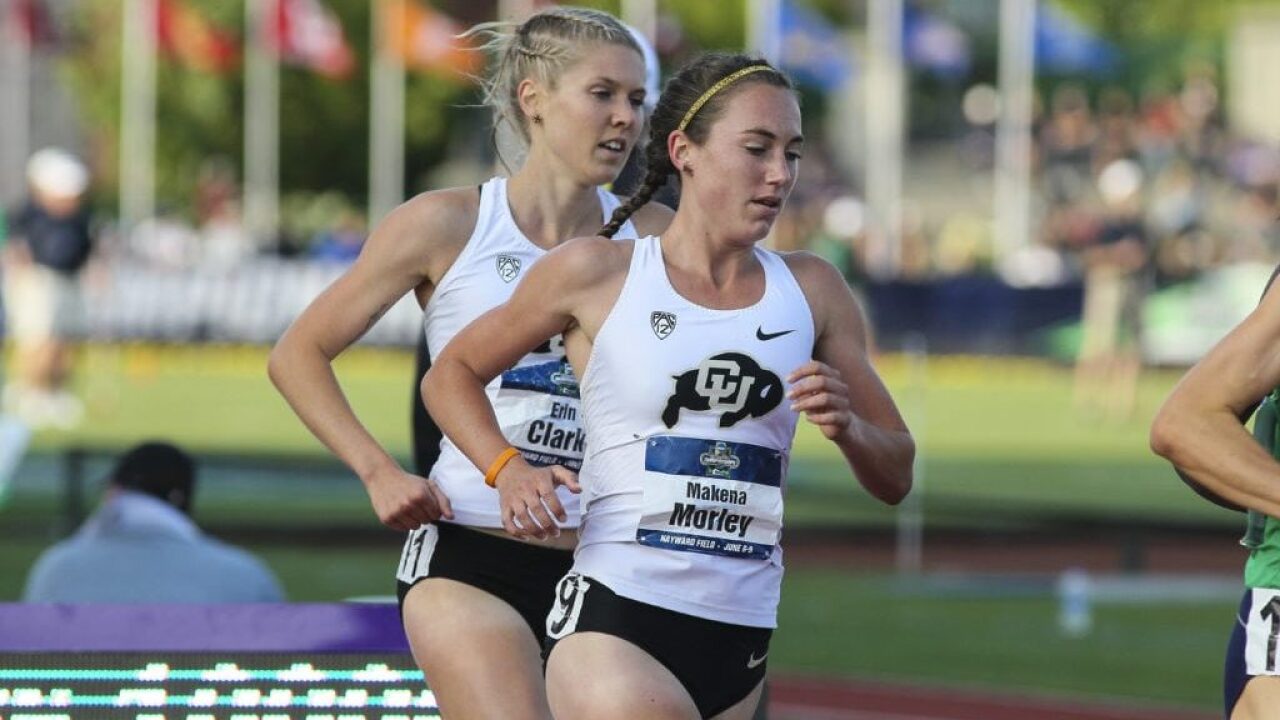 It was the final cross country race of Morley’s collegiate career.

“That was definitely, probably the best moment I’ve had so far in my life. I’ll probably have more great moments, but that definitely is on the top of the list,” she told MTN Sports over the summer.

It was that finish, her fifth collegiate all-American effort, that paved the way for more success in 2019.

Competing at the 2019 NCAA Outdoor Track and Field Championships in Austin, Texas, Morley placed 11th in the women’s 10,000-meter run for the second consecutive season, posting a time of 33 minutes, 39.27 seconds.

It was the third consecutive second-team all-American finish for Morley in the 10K race.

One day later, she bested her efforts with a first-team all-American honor in the women’s 5,000-meter run, placing sixth with a time of 16 minutes, 2.89 seconds. It was her first time running the 5K at the national championships and cemented her status as arguably Montana’s top collegiate runner.

“I was kind of nervous for it because of the heat, but the 10K was a little rough, a little more humidity, but the 5K, it was nice to come back and get a good one in there,” she told MTN Sports. “It was nice to have teammates in both events, too, to run with them, feel their energy and stuff. It was nice to be out on the track again.”

The sixth- and 11th-place finishes in Austin were all-American accolades Nos. 6 and 7 for Morley, who still owns a year of indoor and outdoor track and field eligibility. But she wasn’t finished just yet.

"She is so determined to achieve what she wants to achieve, she will work as hard as she needs to to reach those goals," Sue Loeffler, Morley's former coach at Bigfork, told MTN Sports at the time.

Months later, she returned home as the three-time defending champion in the Missoula Marathon’s half-marathon, owning the course record of 1 hour, 15 minutes and 52 seconds.

“It’s one of my favorite ones to win. It’s almost as special as when we won (the NCAA Division I cross country championship) as a team. It just has a really special place in my heart,” she told MTN Sports ahead of the race. “When I win it, it’s just for all of Montana. It’s great.”

She didn’t disappoint. Morley won the 13th edition of the race in record time, crushing her old record by more than a minute. Her fourth consecutive title came in 1:14.29 in the fastest cumulative Missoula Marathon ever.

“I love Montana. It’s just my special place,” Morley told MTN Sports after the win. “I love Missoula, and just the atmosphere and the whole race. It’s such an amazing race they put on. So I just love coming back here and seeing all of my friends and family. I wasn’t really sure what pace I was going until I saw at Mile 12, I was like, ‘Oh, I could break my own record. OK, sweet.’”

If only it were that simple for the rest of us.

Over the summer, Morley also demonstrated more than her running prowess, giving MTN Sports an exclusive look at her woodworking skills, though she joked about her abilities.

Her father, Steve, runs Morley Cedar Canoes in Swan Lake, a custom boat-building business her grandfather, Greg, started in 1972. Makena learned to cut, carve and create from her grandfather, another unique skill for the multi-talented Morley.

“It was just great to be able to work with the wood,” she said. “We would go out into the woods and find, we called them the curly logs because they have vines around them, but it was so great to work on them with my grandpa, my brother and sister, and make something really cool. You have it forever, too, so that’s kind of nice. You look at it like, ‘I made that. Nice.’”

When she’s not circling the oval for Colorado or running back roads in the Swan Valley, Morley can be found on her custom kayak, working on another of her unique talents — poetry.

“It’s really therapeutic for me, takes out all my stresses. It smells amazing, it’s so beautiful and I really can get into my, it’s a different brain that you get into when I write poetry, so it’s nice to get into that really calm state of mind and stuff just comes to you,” she said.

The year 2019 was arguably Morley’s best yet, and expectations are booming in 2020 — all-American honors No. 8 and beyond, graduation, perhaps some published poetry — and if history has taught us anything, there’s no reason to doubt her.

Though the MontanaSports.com athlete of the year honors are given to native Montanans, the MTN Sports team wanted to give an honorary award to former Montana Western basketball player Brianna King.

“It was definitely a goal of mine at the beginning of the season,” King told MTN Sports. “As the season progressed, I started to see that it was a possibility so it was a huge honor for sure.”

King scored 37 points in the national championship game, drilling six 3-pointers in the 75-59 win over Oklahoma City University. She hit a 3-pointer as time expired to force overtime in the Bulldogs' semifinal game, a 78-71 Western win over Freed-Hardeman.