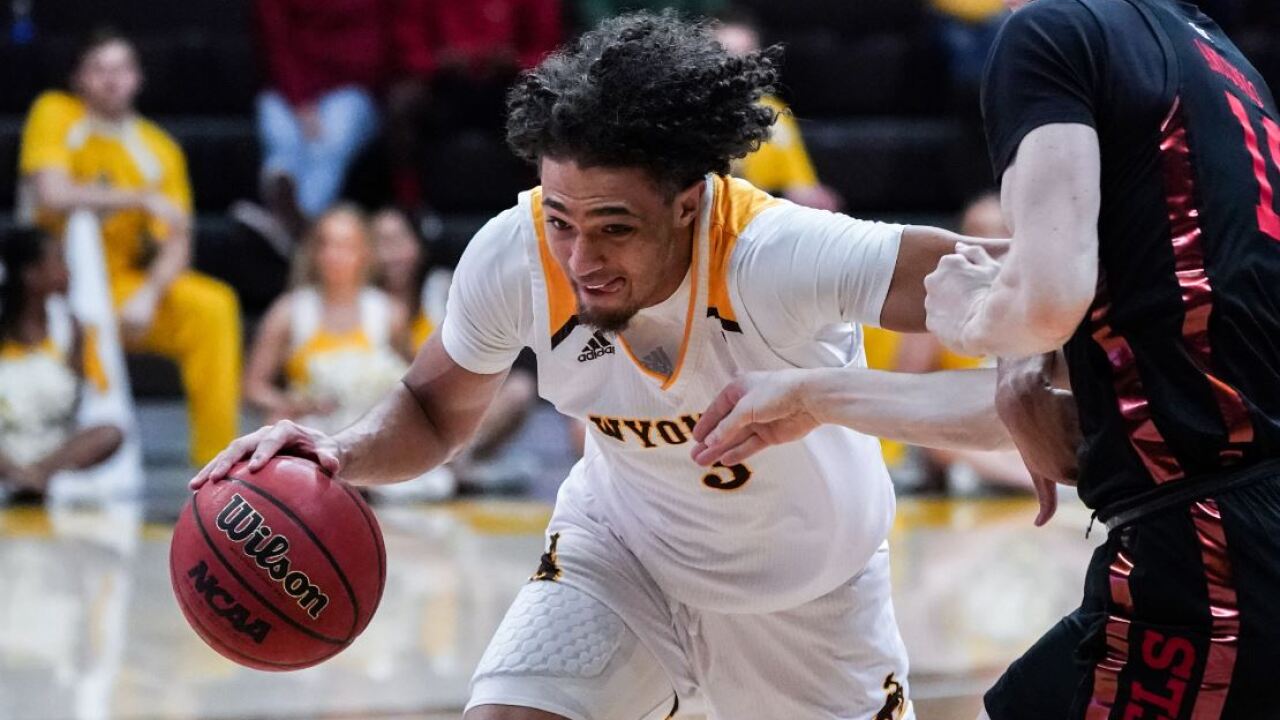 LARAMIE, Wyo. – The Wyoming Cowboys held UNLV to 22 percent from the field in the opening frame, but the Runnin’ Rebels responded by shooting 50 percent in the second half and overtime to earn a 78-69 win over the Pokes on Saturday evening in the Arena-Auditorium.

“We were up seven points with about a 1:20 left in the game, and we missed five free throws down the stretch by some of our better shooters,” UW head coach Allen Edwards said. “At the end of the day, that is the time when you want to go to the free-throw line and extend your margin and make it tougher on your opponent. But we missed them and they (UNLV) came down and made a three, made another bucket and then hit a couple free throws at the end to tie the game and get the game into overtime.”

Wyoming was led by freshman Kwane Marble with a career-high 19 points playing a career best 30 minutes. He was 4-of-4 from the field and 9-of-11 from the free throw line. Senior Jake Hendricks added 18 points with six three pointers on the night. Redshirt sophomore Hunter Maldonado added 16 points and led the team with eight rebounds. He led the team with eight rebounds.

Wyoming was outrebounded 52-28 for the evening. Wyoming forced 14 turnovers and scored 21 points off those miscues. Wyoming also added 12 assists for the game on 17 field goal makes. Wyoming was held to 33 percent from the field and held UNLV to 39 percent, including 20 in the first half for the lowest in an opening frame under Edwards.

“I thought we did a good job ourselves taking care of the basketball (Wyoming committed only seven turnovers in the game),” Edwards said. Our gameplan defensively going into the game was to keep them off guard by changing up our defenses between man and zone. The only mistake we made in zone was we lost their best shooter, number 10 (Jonah Antonio), a few times and he was able to capitalize. We did force them into 14 turnovers, and we got out in transition a little bit and took advantage of those turnovers.”

The Cowboy defense did not allow UNLV a field goal in the opening six minutes of the contest. The Pokes used a lob dunk from Banks and a trio of threes with two from Hendricks and one from Thompson to build an 11-1 advantage. Joran Antonio hit a three pointer for an 11-4 UW advantage with 13:55 left in the first half.

The Pokes would go without a field goal for over seven minutes, but a Hendricks three with 7:10 left In the half made it a 17-11 contest in favor of the Cowboys. The Pokes would use the free throw line to make to build the lead back to nine, but that was short lived after a three from Vitaliy Shibel and layups from Bryce Hamilton for a 22-20 game with 2:53 remaining in the opening frame.

The Pokes would take a five point lead into the break at 27-22. UW held UNLV to the lowest shooting percentage in an opening half under head coach Allen Edwards. The Pokes shot only 29 percent from the field, but went 11-of-15 from the free throw line.

The Runnin’ Rebels opened the second half on a 7-0 run to take a 29-27 advantage on the Pokes. Marble ended the run with a fast break steal and layup and a free throw to give Wyoming a 30-29 lead with 16:15 left in the game. Marble added a triple shortly after for a 33-29 game, as he reached double-figures.

Hendricks would add a pair of threes and help the Pokes build a 39-34 lead with 15 minutes left, but Donnie Tillman responded with an and-one play for a 39-37 game seconds later. The Pokes would then build the lead back to six with buckets from Maldonado and Marble.

The Runnin’ Rebels went on an 8-0 run to take a 55-54 lead with just under six minutes remaining in the contest. The Pokes went 0-4 from the field during the stretch that nearly three minutes. But Marble stopped the streak with a corner three and Maldonado added a pair of freebies to take back the lead 59-55 with 4:32 left.

UNLV was led in scoring by Bryce Hamilton with 19 points for the evening. Antonio added 15 points hitting five three pointers on the night.

The Cowboys return to action on Tuesday heading to Nevada for an 8 p.m. MT start on CBS Sports Network.