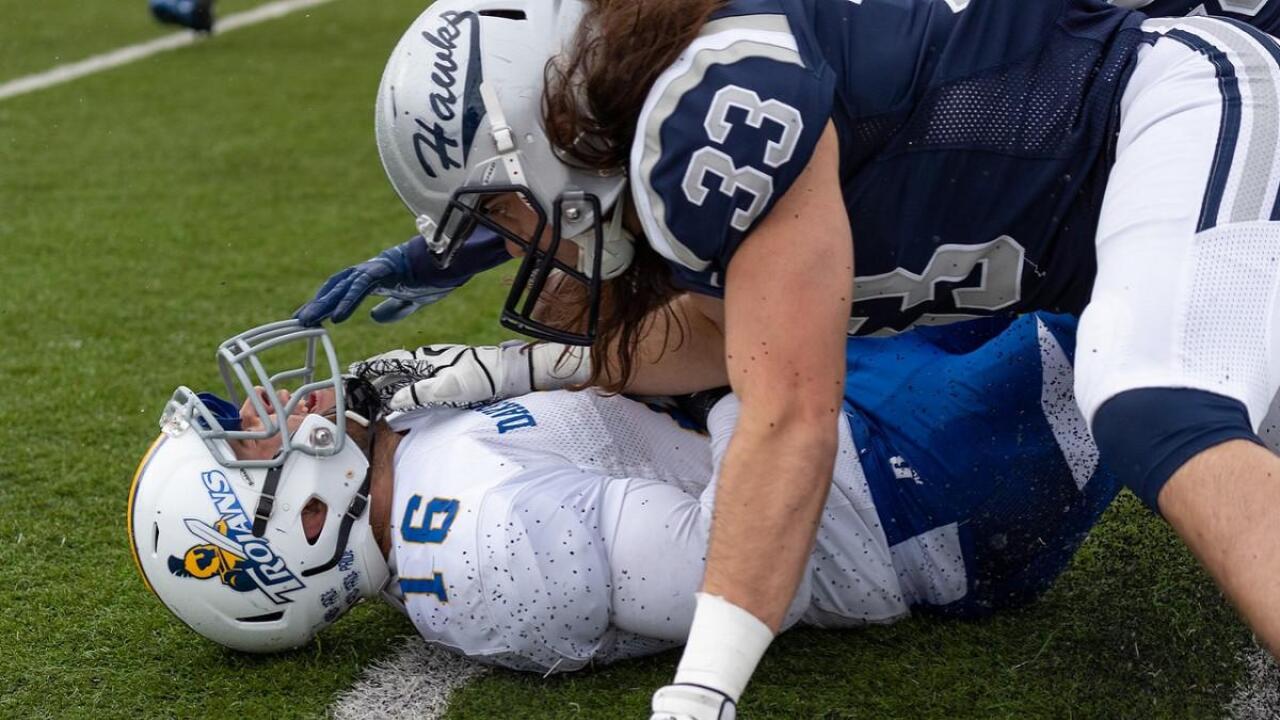 Stanton just knew he needed the former 6-Man quarterback on his team.

“He had a tremendous arm and was very elusive and ran around well, so we just recruited him knowing he was going to be a good football player someday,” Stanton recalled, “and we just needed to find a position that we needed to best fit him in.”

And Miller didn’t quite know what he wanted to do when he got to Dickinson State, either.

“To be honest, I wasn’t sure what I was going to (study) when I came here,” said Miller, now a senior at DSU. “And then business seemed like a good option, and the school catalog I was in allowed me to triple-major without too much extra work, so I thought what the heck.”

As it turns out, Miller has done a little bit of everything during his five years at Dickinson State. On the football field, he’ll have played every linebacker position after starting his career on the offensive side of the ball. He’s also competed at the NAIA track and field national championships, marking a javelin throw of 176 feet, 7 inches in 2017 that set the North Star Athletic Association record (it’s since been broken).

Miller is already a two-time NAIA scholar-athlete, too, and by the end of this year will have degrees in business, accounting and human resources.

“For him to do what he’s done academically at such a high level and be a darned near 4.0 (grade-point average) across the board and taking a high-level business major, majors — to be able to do that, and at the same time being active on campus and participating not just in football, but as a track and field athlete, as well, it says a lot about him,” Stanton raved.

Stanton has to do much of the talking for Miller, who is soft-spoken and quick to deflect too much praise, though he did say he’s “thankful that coach Stanton gave me the opportunity to come play football, and … so far I’ve enjoyed my college career and enjoyed the people I’ve met.”

While Miller has made plenty of lifelong friends on the football field, his best friend is still his dog, Brewer.

"I spend a lot of my free time while at school getting out shooting some pheasants with him, so I really enjoy that,” Miller said.

Quiet by nature, Miller lets his actions speak. He’s been a three-year starter on the football team, playing whichever position the coaches ask, and takes pride in his versatility, competitiveness and do-whatever-is-asked mentality.

His teammates have noticed, too, voting their lead-by-example senior a team captain for this season.

“All the guys on the team, I get along great with. Knowing that they look to me that way, respect me, it means a lot,” Miller said.

“For Paxton, it’s definitely a respect,” Stanton added. “He’s not a team captain because of his rah-rah skills. I think it’s just the way he carries himself, he’s accountable, how well he does in the classroom, the respect our guys have for him as a person, I think is the reason why he’s there and deservedly so.”

This year, Miller is playing Dickinson State’s rover position, a hybrid outside linebacker equally adept at dropping into underneath pass coverage or blitzing the quarterback. It fits Miller’s skill set well, as he had a sack and an interception in the Blue Hawks’ 26-14 season-opening win over Dakota State.

But, two games in, Miller has already had to slide over to weakside linebacker for one game due to COVID-19 contact tracing sidelining one of his fellow linebackers. It’s just one potential pitfall of playing a college football season this fall, but Miller and his teammates are taking advantage of their opportunities on the field.

“It’s awesome. We weren’t taking anything for granted, so we’re taking one game at a time still, focusing each game as our last,” he said.

After starting the season with wins over Dakota State and Mayville State, the schedule stiffens this week. Valley City State, which is also 2-0, travels to Dickinson State for a 2 p.m. kickoff Saturday.

Valley City handed the Blue Hawks their only conference loss of the season last year and has finished just one game back of DSU in the league standings each of the past two seasons. Dickinson State has won five consecutive NSAA conference championships.

“Every team in our conference, when they know they’re playing Dickinson State, it’s the game they look forward to the most, so they’re going to bring their best game,” Miller said. “We’ve just got to come with the mentality that we’re still the best team and then play to our potential.”