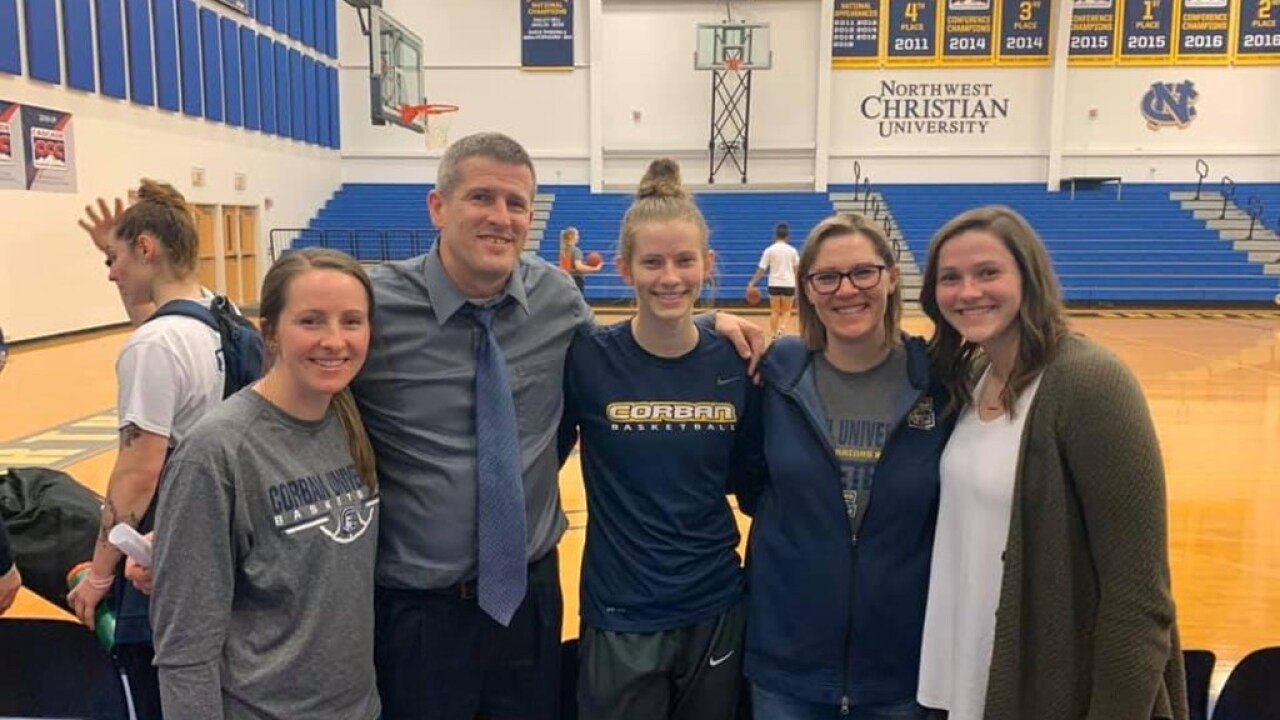 CORVALLIS, Ore. – There is a special bond between father and daughter and for Corban University women’s basketball head coach Bill Pilgeram, that bond is deeply intertwined with sports with all three of his daughters: Caity, Sadra and Rayna.

“Sports have always been an integral part of our family,” said Coach Pilgeram. “[My wife] Candice and I both played college sports and supported any activities the kids wanted to be in. All of the kids played sports year round (soccer, basketball, softball, volleyball) and our family calendar, even vacations, were centered around sporting events – the 2012 Women's Final Four being one of our favorite family vacations. There honestly was never a time where family and sports didn't intersect.”

Both Bill and Candice grew up in small Montana towns – Candice from Stanford with a graduation class of nine and Bill from Plains with a slightly larger graduation class of 29 – but neither wanted to become farmers. Instead, Bill turned his love of basketball – he was a student-athlete at Carroll College – into a career, coaching at the high school level before taking the helm at Corban in May of 2018 and even coached his daughters from an early age.

“I never expected to coach my kids at the college level,” said Bill. “I was blessed to be able to coach all three girls in high school and thought that their basketball careers were all over when I moved on to the Corban women’s basketball position.”

It wasn’t over, however. In fact, the Warriors were about to get a three-Pilgeram package deal.

Rayna played volleyball at Carroll College, but as graduation came closer, Dad thought of an idea.

“I approached her with the possibility of going to graduate school for one year and playing a year of basketball,” said Bill. “I left it completely up to her and she eventually decided that was something she wanted to do.”

Sadie Wilkins, a full-time fourth-grade teacher and former Warrior, was also still in the area after she graduated from Corban and would volunteer at practices and games as much as she could. After that first year, Bill had another thought.

“We talked about her officially joining our staff part-time,” said Bill. “She is a natural coach, loves Corban basketball, and has a great relationship with all of our players.”

With the three Pilgerams together on the court, the Warriors finished this past year with an 18-12 overall record – just the second 18-win season in the past seven years – and a trip to the CCC Tournament Semifinals, presented by U.S. Bank. Top-seeded and No. 16-ranked Northwest Christian University ended Corban’s season early, but at the end of the day, the wins – and losses – aren’t what Bill takes away from this season.

“The quality time that I get to spend with [my daughters] doing something that I am very passionate about is the best part,” said Bill. “Basketball is such an important part of all of our lives and to have that intersect with family has been one of the biggest joys of my career as a coach and a dad. So much time is spent at practice, on road trips, in the gym, etc., and sharing that with them instead of being apart from them is a very, very special opportunity.”