Former Billings wrestler Glory Konecny: 'I want it more than ever' 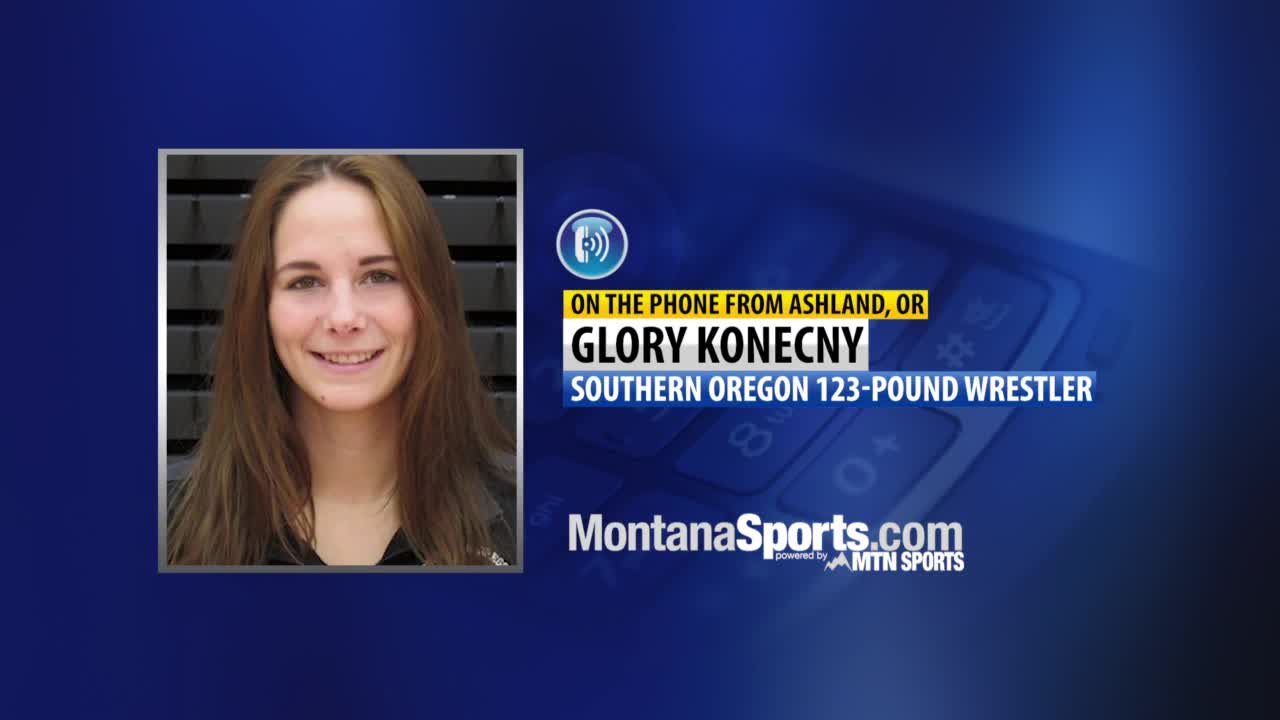 ASHLAND, Ore. -- It didn't take Glory Konecny long to get hooked on wrestling.

“I pretty much saw a flyer in kindergarten but my mom said I had to wait until my brother was old enough, and then in second grade I remembered so I did it,” Konecny told MTN Sports during her Billings Skyview days in 2016.

That was the Glory Konecny Montana wrestling fans remember from a handful of years back. These days she’s grown into one of the up-and-coming collegiate wrestlers in the country.

The Southern Oregon sophomore was set to compete in the 123-pound bracket at the NAIA Invitational March 13-14 before the novel coronavirus left its mark.

“It was really heart-breaking because we had already practiced in the facility, my whole team had such a great energy and we really felt like we had a chance at winning the title as team this year, so that was really hard for us,” Konecny said, recalling the events as they unfolded in Jamestown, N.D. “We had never felt so prepared and confident going into a national tournament as we had this year.”

“I was so excited. This was the first year where I felt really confident going in,” she continued. “I had a really close match with the girl that was the No. 1 seed, and I knew I could have beat her if we wrestled again. I was looking forward to trying to wrestle her in the finals at nationals, but I never got the chance, which was really, really hard for me.”

Now, like many athletes across the country, Konecny’s summer plans are uncertain. Gyms, weight rooms and Southern Oregon’s rec center are closed, forcing her to find alternative methods for working out.

One goal for her summer, social distancing pending, is to return to her home state in an effort to prepare the next group of female wrestlers.

“I’m going to try to run a women’s camp in Montana this summer, just because (girls wrestling) is finally being sanctioned and there are so few older wrestling females, so that’s definitely something I want to do,” she said.

Though girls wrestling wasn’t officially sanctioned when Konecny was on the mats at Billings Skyview and Billings West, she did turn heads, particularly in her final two seasons with the Golden Bears where she qualified for the state tournament.

She’s believed to be the first Billings girl to sign a college wrestling scholarship, joining the likes of Laurel’s Abi Gontarek and Helena High’s Alyssa Schrull in making history in their hometowns. Schrull, a senior at Jamestown, was also set to compete at the NAIA Invitational, while Gontarek originally became the first University of Providence women’s wrestling signing before transferring to McKendree University in Lebanon, Ill.

“I think it’s super important to show the younger girls that are starting to get into wrestling how far it will take you. It changed my life,” Konecny said. “My teammates are my best friends. Wrestling at SOU has been a dream come true and I’m really happy they got to see me and Alyssa and those girls before it got sanctioned.”

Konecny hopes to see Montana’s girls wrestling take off in its initial year, an idea her younger brother assures her is likely to happen based on the attendance numbers at the junior high level this year. But her mind can’t help but drift back to the “what could have been” in mid-March had her championship aspirations not been taken away.

“That’s definitely my goal, to win a national title, not only myself, but my whole team. I think we all are ready,” she said. “I think, at the end of the day, what happened is out of my control, but I want it more than ever. I was kind of light wrestling at 123 the whole year, so I’m hoping to bulk up a little bit and that might help me, too.”