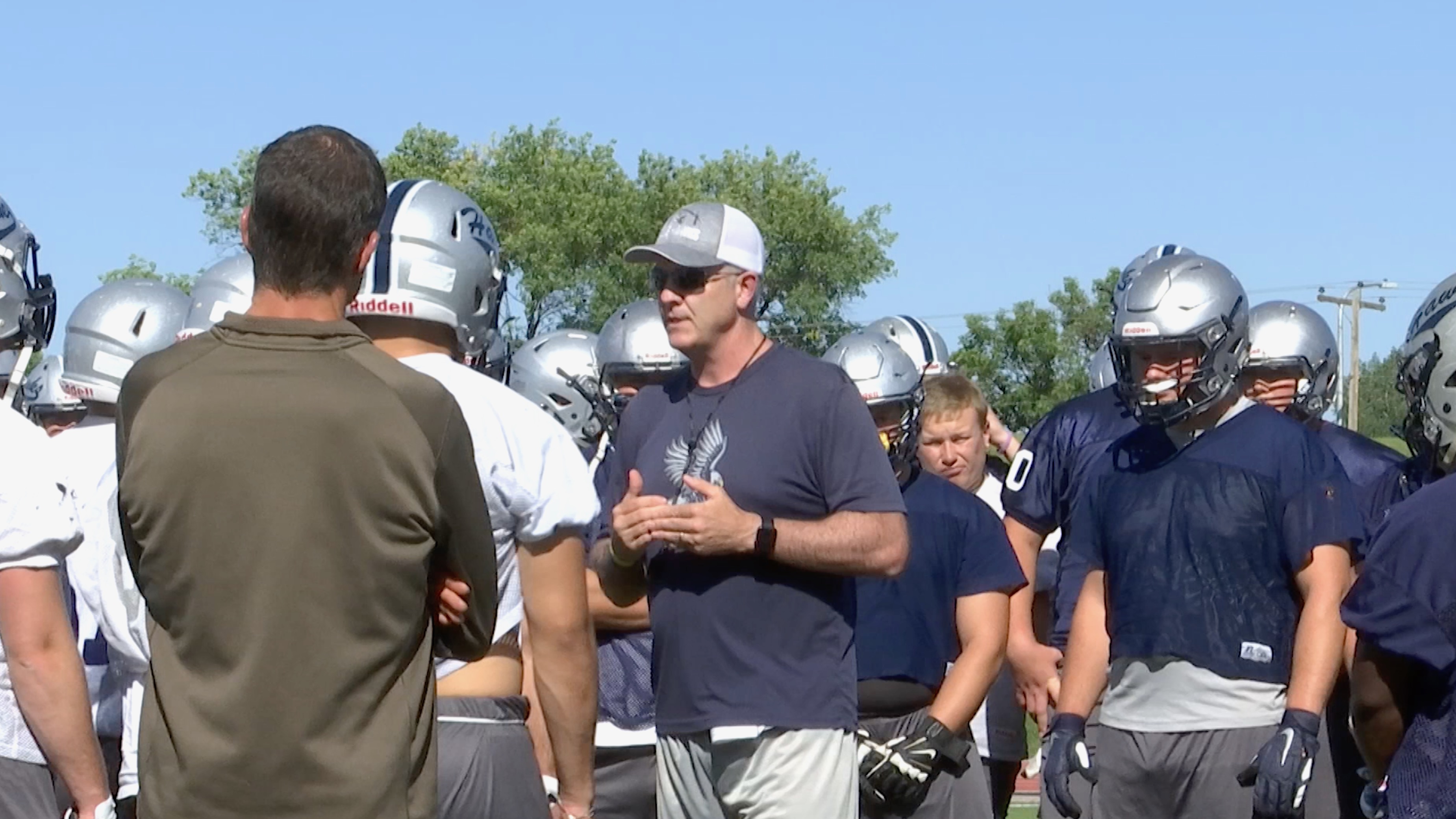 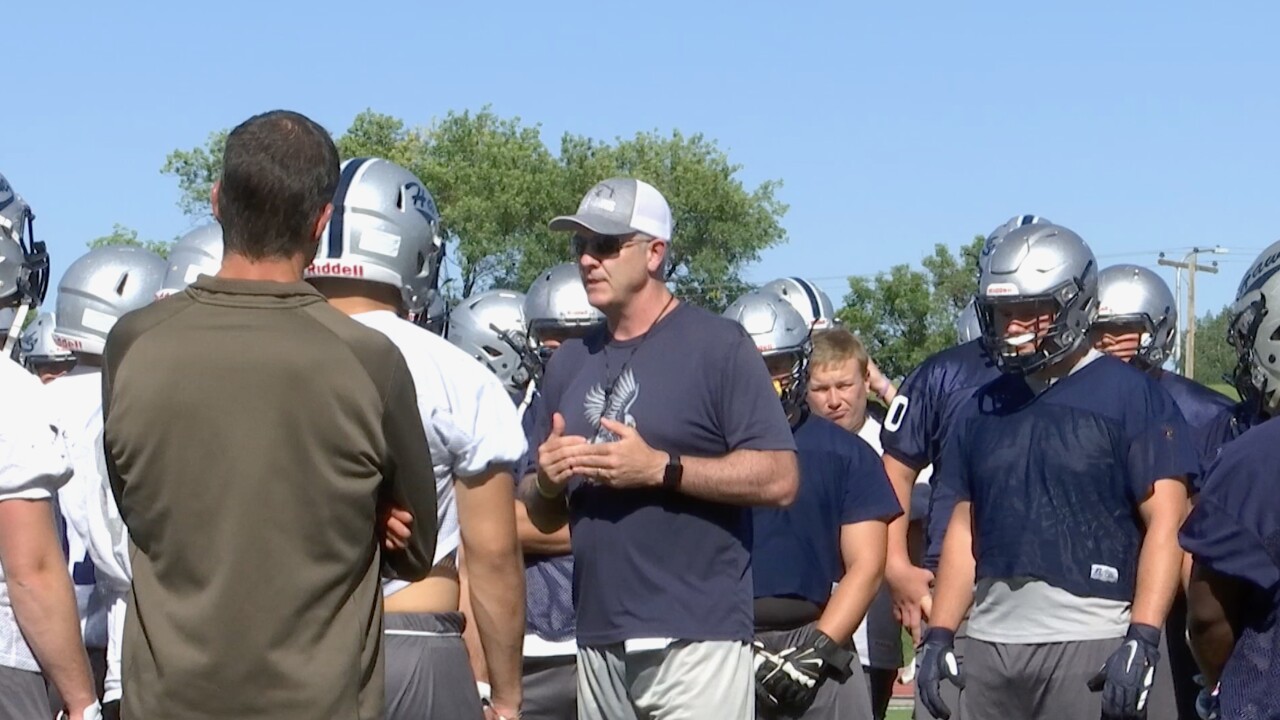 DICKINSON, N.D. — More than 30 Montanans will be suiting up for a college football game this weekend.

They won’t be playing for Montana or Montana State, which both had their fall seasons canceled by the Big Sky Conference, or any of the five in-state Frontier Conference schools, which have pushed their schedules to the spring in light of the coronavirus pandemic. No, Montana’s de facto college football team for this fall resides a little farther east, just across the border at Dickinson (N.D.) State.

An impressive group of Treasure State natives, led by head coach Pete Stanton, will be taking the field for the Blue Hawks’ season-opening game at Dakota State in their quest for a sixth consecutive North Star Athletic Association conference championship.

“I think they’re very excited and also very aware of what they need to do and very aware that it’s a privilege to be out there,” said Stanton, a Baker native in his seventh season as DSU’s head football coach. “They’ve done everything we’ve asked them off the field and in meeting rooms and not gathering to do everything they can do to just play, and that’s what this team wants to do, is just get out and play.”

The NSAA, which includes six football members in North Dakota and South Dakota, is one of just a handful of conferences playing football this fall. Most others have postponed their seasons to the spring of 2021 in best-case scenarios. That isn’t lost on Stanton or his players, which have jumped through the necessary protocols, regulations and guidelines to kick off an actual game on Saturday.

“We had a lot of precautions going and a lot of changes with how we’re running our meetings and our practices and our stretching groups and all that, but our guys have done an amazing job of getting themselves adjusted regarding the (COVID-19 restrictions),” said Stanton, who also added that DSU has tested 350 athletes and navigated positive tests and close-contact quarantines.

Success is the new standard for Dickinson State, which was voted by coaches as the preseason favorite in the conference. While the Blue Hawks return a host of talented players, including record-setting receiver Tyger Frye from Billings Senior, they must work in a new quarterback after Hayden Gibson graduated. Drew Boedecker, a Sheridan, Wyo., product won the starting job during a competition with Shelby’s Aaron White this fall.

Boedecker would be well-suited to feature Frye early and often in the DSU offense. Frye, 5-foot-11 and 170 pounds, is coming off an all-conference season in 2019 in which he caught 72 passes for 845 yards. He already has a program-record 166 career catches, and his 1,923 career receiving yards currently rank third in DSU history and his 20 career touchdowns are fourth.

“He’s one of our captains this year, and rightfully so,” Stanton said of Frye. “Just does a great job of leading and just being a great teammate off the field. And then on the field, he just does such a great job with route running and having an understanding of what we’re doing. He’s one of the better receivers I’ve ever been around as far as understanding leverage and being able to gain leverage on defensive backs. We’re just excited for him and his senior year.”

Frye has NAIA all-American potential, but he isn’t the only steady player on the Dickinson State offense. Conor McCarvel, a sophomore wide receiver from Helena Capital, is expected to have a big season, as well. He’s the son of offensive coordinator Russell McCarvel, who has a long history of coaching high school football in Montana.

Of course, an offense only goes as far as its line, and DSU’s should again be a strength with two-time all-conference center Drew Heiser back in the fold. Matt Dey, from Sidney, is another versatile piece up front, and Baker’s Javon DeGrand is also in the mix.

Running backs Riley Linder, a Scobey native, and Alec Lovegren, another Sidney product, provide the Blue Hawks with a thunder-and-lightning combination in the backfield.

“They really complement each other well,” Stanton said. “Riley’s a guy that’s just a physical, downhill runner that really is tough to bring down, and Alec’s a guy that’s shifty and has got good vision and can catch the ball out of the backfield well.”

Lovegren and Dey are two of six Sidney players on the DSU roster. Two others — juniors Dawson McGlothlin and Jared Steinbeisser — figure to have big roles in the defensive secondary, which has typically been a strength for the Blue Hawks. Glendive’s Taylor Conrad will also get defensive repetitions, but there’s another eastern Montana guy who has “gotten after it,” according to Stanton.

“In the secondary, we have a 6-Man player, Tel Lunde from Wibaux, that has really done a nice job for us,” the head coach said, “and we plan to utilize him this year on defense, as well, and get him in the fold on defense, as well.”

Lunde and the Blue Hawks’ secondary will be playing behind three linebackers from Montana, as well: Paxton Miller of Savage, Aaric Spring of Billings West and Jared Smith of Glasgow. Miller and Spring are both seniors and have showcased the ability to play multiple linebacker spots during their careers. Miller was voted a team captain and Spring is also a team leader, according to Stanton.

“We’re excited about those guys that we have from Montana, they’re going to be big contributors for us,” Stanton said.

The Blue Hawks kick off their 2020 season at Dakota State in Madison, S.D. at 1 p.m. (MDT) Saturday. Stanton said DSU’s fan allotment for the game has been sold out, but all of the Blue Hawks’ games can be streamed online. For the complete schedule, click here.