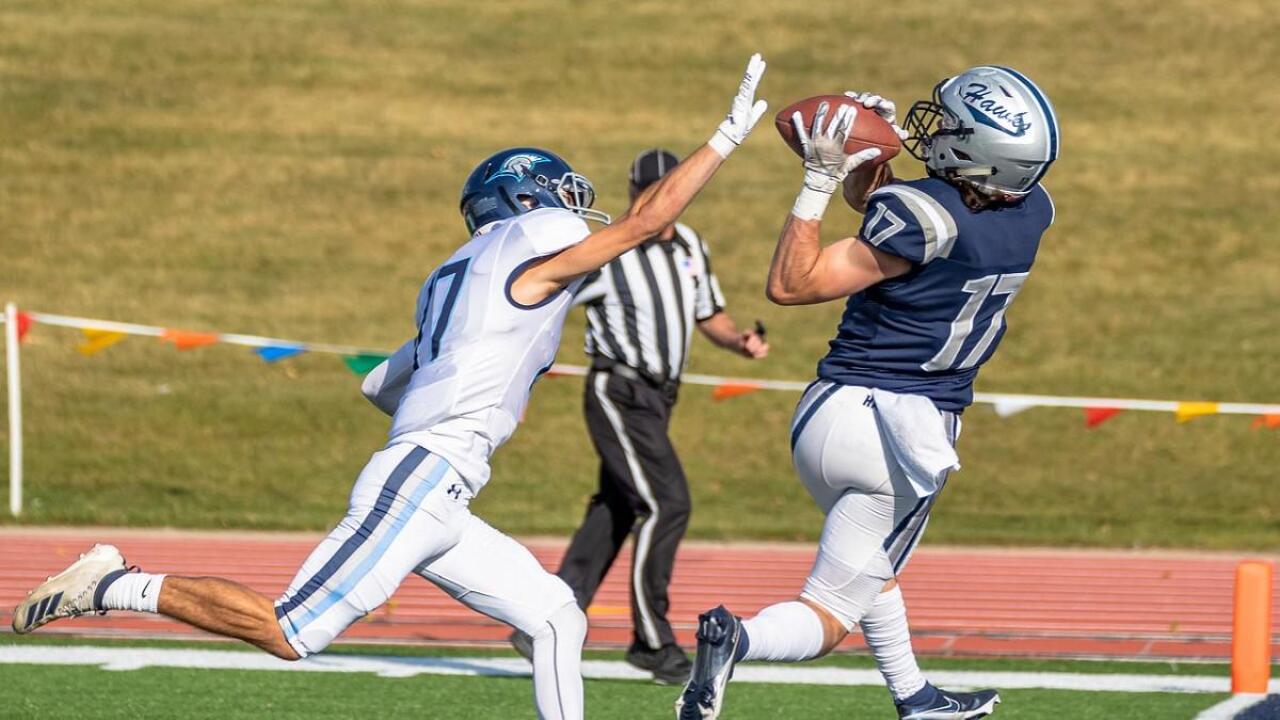 DICKINSON, N.D. — One of the key players in Dickinson State’s football success isn’t even part of the program.

Whether she knows it or not, Stacey Collins receives much of the credit for the pipeline from Sidney High School to the DSU football program, which has six former Eagles on its 2020 roster, including reigning NAIA national defensive player of the week Dawson McGlothlin and senior captain Matt Dey.

“We have Mrs. Collins back home, she can kind of tell us, like, ‘Oh, this program is a real deal.’ And I remember her talking to me about it when I was in high school. … I remember her telling me stories about when she was running track,” recalled Dey, a 2016 Sidney graduate.

Collins is a Sidney native herself and 2004 Dickinson State graduate. She was a two-time NAIA all-American on the Blue Hawks’ track and field team and set school records in the 200-meter dash and 1,600-meter relay. She was inducted into the Blue Hawk Hall of Fame in 2019.

Collins is now the school counselor and head track and field coach at Sidney High School, guiding the Eagles to the 2017 Class A state championship. That team included McGlothlin and current DSU running back Alec Lovegren, who each ran legs on the Eagles’ championship-winning 400-meter relay team.

“It’s a winning attitude and it’s a family bond, and she just brings a great atmosphere for young athletes and she brings a great perspective,” McGlothlin said. “She’s always there for questions if people need them about college and what it’s like to be a collegiate athlete, so she’s doing a great job, and she really does a great job of promoting Dickinson State and how great of school and athletic programs they have up here.”

Guys like Dey and McGlothlin have only enhanced the football program at DSU. Dey is a football junkie — “I’m that freaky guy on Madden that plays the Skills Trainer, because I like to learn what everything different is,” he said — and his knowledge, versatility and leadership have proven to be big assets for the Blue Hawks.

His teammates voted him a team captain this year, and he’s now played every position on the offensive line. It’s no small task moving from guard to tackle to center, where he’s playing this year after the Blue Hawks’ all-conference starter, Drew Heiser, suffered an injury. Dey is now manning the middle, calling out defensive fronts and making checks for his teammates in the trenches.

“He’s just doing a great job there,” said DSU coach Pete Stanton. “He’s just done everything we’ve asked him to do. He’s versatile, he’s one of our stronger guys on our team, he has the ability to get out and get on guys and get downfield and block on guys, and just very intelligent.”

“Matt Dey, he’s a great leader. He is, as far as knowledge of the game, I’ve never seen someone understand the game of football, especially from an offensive lineman standpoint, as he does,” echoed McGlothlin. “He’s driven, he works his tail off every single day in practice, weight room, film room, he’s working, he’s learning.”

McGlothlin, too, has been learning on the job. After graduating from Sidney in 2017, McGlothlin headed west to the University of Montana. He spent two years away from football focusing on his studies at UM, but the gridiron kept calling. Ultimately, McGlothlin headed back east and joined the DSU program in 2019.

A defensive back with an NCAA Division I skill set, McGlothlin started his Blue Hawks career at cornerback. He moved to safety this year and has blossomed, recording three interceptions in his past two games, including a huge performance last week when he had two picks and four pass break-ups in DSU’s 23-3 win over Dakota State.

“Definitely last year, my first year (at Dickinson State), I could definitely feel some rust,” McGlothlin said. “But I feel like I’ve knocked it all off and I’m back kind of in my rhythm that I used to be in, and I’m just looking forward to getting better every week.”

“He’s our center fielder out there,” Stanton said. “We have a lot of calls that our safeties are expected to make out there, and he’s really the guy that leads the way there and gets the job done.”

The Blue Hawks have regularly churned out top-tier defensive backs, including all-Americans Derick VandeBossche (2019), Jay Liggins (2018) and Cain Boschee (2016, 2018). Boschee, a graduate of Glacier High in Kalispell, set Dickinson State’s career record with 24 interceptions from 2015-18. He returned seven of those for touchdowns, which is also a program record.

McGlothlin headlines this year’s secondary, and his three picks are tied for second-most in the entire NAIA this fall. As a team, Dickinson State has already recorded nine interceptions as the defense continues to get better and better with each passing week. The Blue Hawks have allowed just nine total points in their past two games and are giving up 12.4 points per game on the season.

“Oh man, those guys are balling out. And the thing is, we’ve been seeing it since we came on campus. … We’ve been watching them play, I believe, top-level defense for however long we’ve been here,” Dey said. “Those guys have been just playing their heads off, and it’s one of the coolest things to watch, just a team play the way they have been.”

The defense also includes Jared Steinbeisser, another Sidney product, in the secondary. Cooper McGlothlin, Dawson’s younger brother, is a freshman defensive back, as well.

The Sidney-Dickinson State connection is rounded out by backup kicker Jace Johnson and Lovegren, a versatile running back who is involved in both the running and passing games.