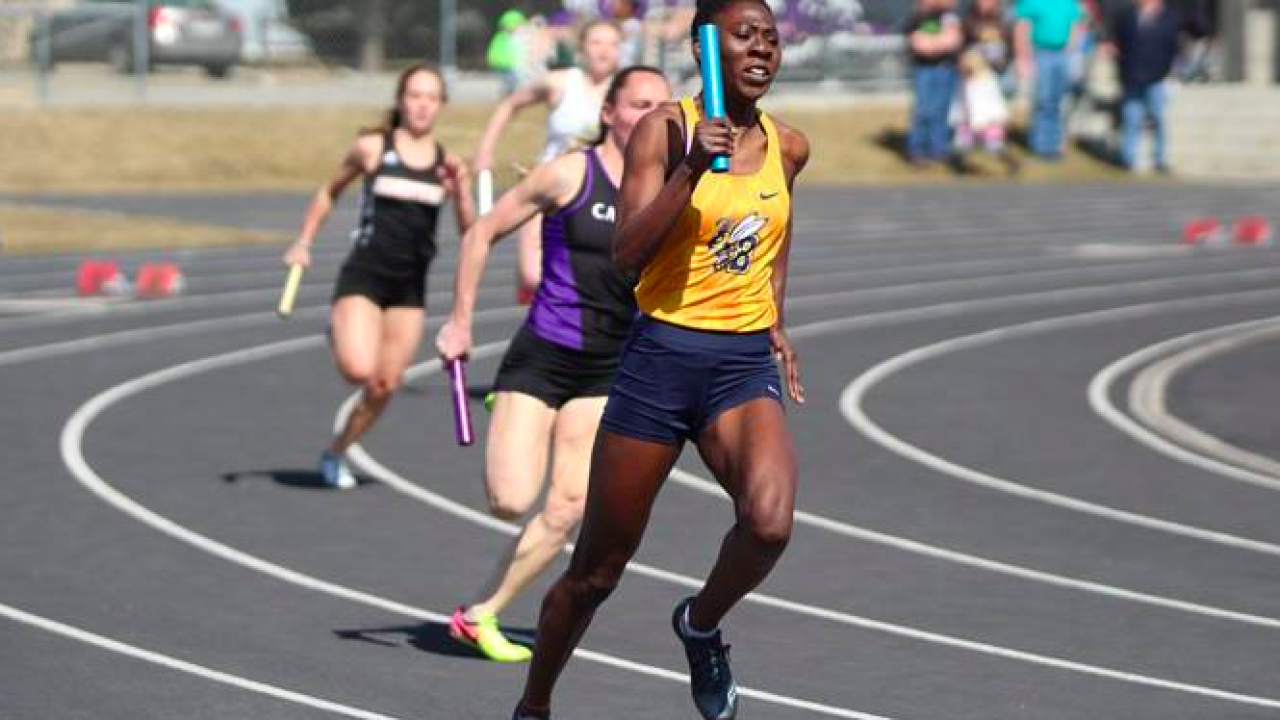 For starters, she is a 26-year-old senior set to return for her final season in the fall. Born in Haiti, she has lived in Idaho, Missouri, and Montana, been a member of the Army National Guard and was raised among 13 fellow brothers and sisters. Chevalier’s colorful mosaic of life experiences have shaped her personality and helped her become an important leader for much younger Yellowjacket teammates. On the track, she continues to improve and lays claim to some of the top times on the team over the past three seasons in events such as the 100-meter dash, 200-meter dash, and 4x100 meter relay.

Chevalier’s current success and achievements did not come without facing adversity first. She spent her first eight years of life in Port-au-Prince Haiti, due east from Cuba in the Caribbean Sea. Safety is an extreme concern for the residents of Haiti and the country continues to be extremely poor and politically unstable, even by comparison to its neighbors like bordering Dominican Republic. After considering all these factors, Chevalier’s mother Angelaine Jules desired to give her the opportunity for a better life and she was adopted from an orphanage and came to America along with her younger sister Shaika (23).

“It wasn’t unusual at the time for siblings in our situation to get separated from each other and go to different families,” Chevalier recalled. “When I met my future parents (Gary and Crystal Chevalier), I insisted we were a package deal. It wasn’t going to be one or the other. They got both of us.”

Chevalier lived in Idaho for a short time before moving to Missouri briefly and then Billings, where she went to Skyview High School and has resided for the past 11 years. Arriving in an area of the country not known for its diversity for the first time was difficult.

“Learning to speak English was hard,” Chavalier said. “Kids used to make fun of our accents and we were just thrown into a completely different culture and a new school. Most of the time, I was the only black kid in my class, so it took a while to adjust to living in the United States.”

Over time, Chevalier and her sister adapted to life in a completely new setting, but with her biological family still residing in Haiti’s capital and largest city, she continually worried about their safety.

Then on January 12, 2010, a magnitude 7.0 earthquake rocked Haiti in the early evening prior to sunset. Most estimates pointed to a death toll north of 100,000 casualties. Chevalier had no way to communicate with members of her family after the earthquake and did not find out they had survived it until years later. Already one of the poorest countries in the world prior to the disaster, Haitians possessed few resources to rebuild their country’s infrastructure, a challenge that continues today. For the past several years, Chevalier has been able to connect with her Haitian relatives through Facebook, but visiting can be a dangerous endeavor and she has not been back since age 13.

Spending her formative year in Billings, Chevalier developed her love for sports at a young age. She always looked forward to P.E. class in elementary and middle school and was naturally athletic. “I always wanted to race against all the boys and prove I was faster than them,” she joked.

When she made it to Skyview High School, a teacher noted her fondness for racing and pushed her to try out for the track team. That teacher was the legendary Kas Ioane, MSUB hall of fame inductee and 39-year basketball and track and field coach for Skyview. Chevalier was interested but there still existed a looming challenge. Her family simply could not afford it. Ioane then volunteered to pay out of his own pocket for her to join the team as a junior.

Chevalier found moderate success using her raw talent right away, but many of the other runners on the team had years of training and technique to draw upon, a major advantage. She set a goal of making the school’s 4x100 meter relay team and turned to former MSUB assistant cross country coach and friend Trent Tucker for tips on how to improve. Chevalier even agreed to babysit Tucker’s kids in exchange for coaching advice on the more technical aspects of the sport.

Before long, she accelerated past many of her teammates on the track and won a coveted spot on the relay team as a senior. She also worked a number of jobs while going to school to pay her own way on things like athletic fees and uniform cost. All of her extra effort culminated in a trip to the Montana state meet and she helped set a new Skyview school record running a leg of the 4x100 meter relay.

After cultivating success in high school, Chevalier graduated in 2013 on the dean’s list. She was encouraged by Tucker to go to college and continue running track and she chose MSUB because it was close to home and she could compete for then head coach Dave Coppock. After Coppock retired in 2017, Jonathan Woehl moved up from assistant coach and the two developed a good relationship, enabling Chevalier to continue gaining speed on the track. In her first full season, she competed in seven meets and posted a season best time of 13.26 seconds in the 100 meters and 26.65 seconds in the 200 meters. She also made the 4x100 and 4x400 meter relay teams.

After her freshman campaign, Chevalier received an intriguing letter from a recruiter in the Army National Guard. She learned more about it and eventually dropped out at MSUB to attend basic training in 2016.

“I never really thought I was the type of person to join the military, but because I was so grateful to be in this country, I thought joining the National Guard would be a good way to show my appreciation and give back.”

She specialized in military policing and deployed for one-month to the Lolo National Forest in northwest Montana, working security checkpoints for firefighters near Seeley Lake before returning to Billings. A lightning strike started the Rice Ridge Fire and it grew to over 100,000 acres before firefighting personnel were able to contain it with the help of the National Guard.

“My military training taught me a lot about discipline and hard work,” Chevalier reflected. “It definitely helped me do better in school when I returned to MSUB. Having taken so much time off to serve in the guard, I realized how much I missed competing. By then I was older than anyone else on the team and I wanted to find out if I could still compete at a high level.”

Fast forward one year and Chevalier was back on the team and running nearly a full second faster in the 100 meters. She finished with a time of 12.64 seconds at the Great Northwest Athletic Conference outdoor championships, good for 13th place. She also took home 19th position in the 200 meters. Chevalier tends to gain speed in the latter half of her sprints and this ability to pass competitors as she nears the finish line makes her an exciting athlete to watch.

In the beginning, she struggled to gain a quick start out of the blocks, costing valuable milliseconds on the stopwatch. She made steady progress on improving this weakness last year with coach Woehl and was poised for an even better 2019-20 indoor season when an unexpected injury and a global health crisis drastically changed her course.

Competing in her first meet of the season at the Dave Little Alumni Mile on January 25, Chevalier pulled her hamstring near the mid-point of the 60-meter dash. Despite the pain, she still managed to finish 12th with a time of 8.79 seconds. Determined to get back to competition quickly, she began a rehab assignment for a possible return in the spring. Then in March, the COVID-19 health crisis enveloped the United States and caused the cancellation of spring competition for all NCAA sports, including track and field. Under the new rules, Chevalier took gained a chance to return in the fall and compete for one more season.

“I am really looking forward to having Anne Lory back and healthy this year,” commented Woehl. “I think her wealth of experience is going to trickle down to all our newcomers and she’ll do a good job of showing them how we do things. She has the ability to translate hard work in practice to good results at meets. She’s obviously incredibly fast but also puts in the time in order to make things happen.”

Still an active member of the National Guard, Chevalier knows she could be called back into action at any time and always keeps her family informed of that possibility. Protests Nationally over the police killing of George Floyd in Minneapolis shined a spotlight on systemic racial inequality in the United States at the end of May and the National Guard was called in to help in several cities. Chevalier stated that while she rarely experiences acts of racism on campus, that it does happen, and Montana is not immune to racial injustice, which effects all of us.

“Living in Montana as a minority is challenging,” Chavalier said. “Black people represent such a small portion of the population that it can be hard to fit in. I have experienced a lot of prejudice in my life, even in this state. Sometimes people get so used to their sheltered lives, they struggle to see that this is their problem too, not just in other places. Just because a person may not personally experience it, doesn’t mean it doesn’t exist. I think the biggest thing is being able to open up our eyes and say hey, this is happening everywhere and we can stand up and be part of the change and make a difference. I was super proud of our community for organizing a peaceful protest right here in Billings and I think that support makes an impact.”

Chevalier’s interest in being a voice for the marginalized fits her career ambitions well. She plans to graduate MSUB with a degree in criminal justice and a minor in sociology. After college, she wants to attend law school and possibly become an attorney.

“I am really passionate about helping people, especially those who don’t have the opportunity to represent themselves,” Chevalier said. She also stated a desire to further help her family and the people of Haiti in some way as part of her future goals. “Sending them money helps for the short term, but I really want to do more. It is a difficult situation for them on a daily basis.”

In the meantime, she has another year to finish strong on the track team and set an example for her teammates. “I really want to use my unique experiences as a platform to help them become better leaders as well. I am so excited to have the opportunity to come back in the fall.”

The college athletics schedule for next season is subject to change, but early indications from coach Woehl point to many seniors returning for an extra year of eligibility. Women’s track and field has also added nine new athletes to its 2020-21 roster as the Yellowjackets seek to improve on a 10th place conference result in 2018-19.