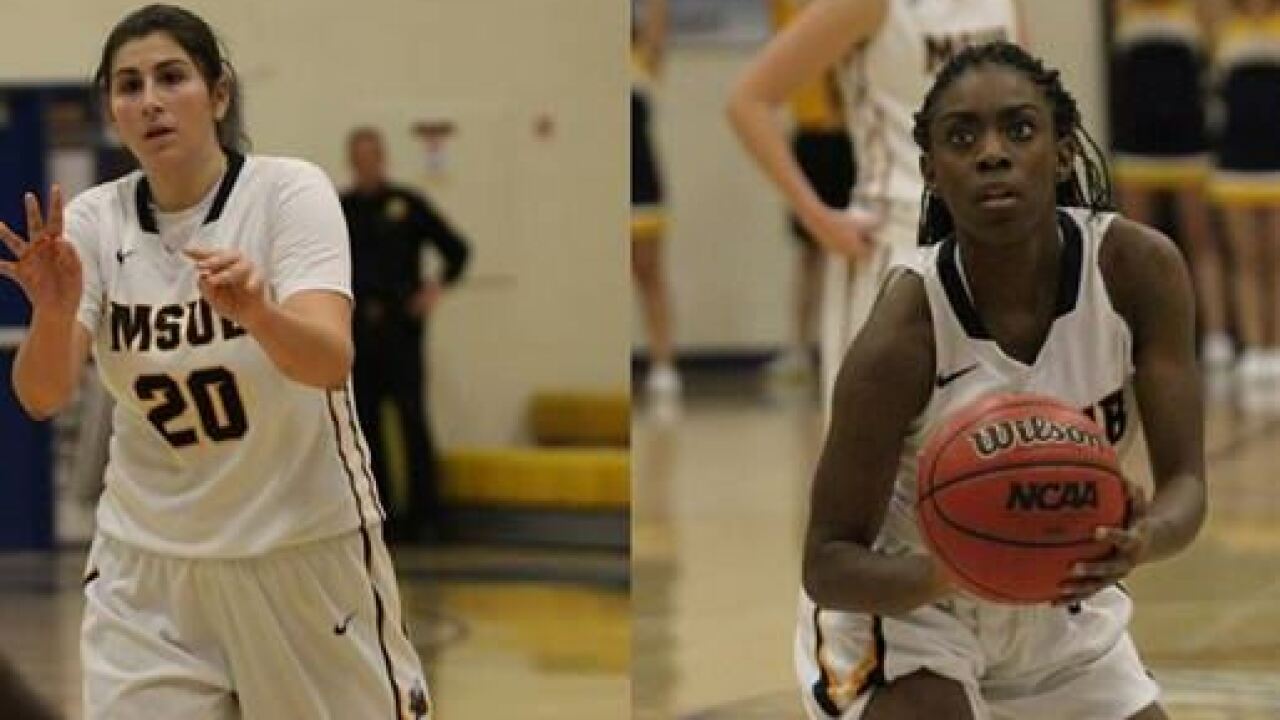 PORTLAND, Ore. – Two Montana State University Billings returners were named to the Great Northwest Athletic Conference women’s basketball preseason all-league team announced by the conference office Tuesday. Junior Hannah Collins earned the distinction after she averaged 14.8 points and 1.8 rebounds per game to add to 84 assists in 2018-19. Sophomore Taryn Shelley was recognized after solidifying herself in the starting lineup as a freshman with 11.1 points and 8.2 rebounds per game to go with 48 blocks.

Collins and Shelley were among 15 of the GNAC’s top women’s basketball players selected, representing eight teams. Seven players on the list were unanimous selections. “Hannah and Taryn are very deserving of this recognition as they had excellent seasons a year ago,” commented MSUB head coach Kevin Woodin. “Both of them have improved so I believe they will play at an even higher level this year. They are outstanding student-athletes both on and off the court and I enjoy working with them.”

Collins (Great Falls, Montana) stood out as a sophomore and was named second team all-GNAC as a point guard. She ranked second in the GNAC and led the team in points per game. Collins also ranked ninth in the GNAC and led the team with 3.4 assists per game. She posted the seventh best single-season mark in school history in free throw percentage at 84.2 percent. Collings started 25 of 26 games and averaged a team high 30.2 minutes per game. She shot 39.2 percent from the field and 34.5 percent from 3-point range, leading the team with 370 total points. Collins managed a season high 29 points on two occasions, including November 9 against Providence and January 12 against Alaska.

Collins ranked second on the team with 34 assists, marked a season high four steals on November 9 against Providence, and had eight assists on November 23 against Valley City State. She made a season-best 10 field goals against the Argos and five 3-pointers at Alaska. Collins was also awarded most valuable player of the Yellowjacket Classic. She developed as a key player during the team’s seven-game playoff run down the stretch in 2017-18.

Shelley (Shoreline, Washington) made an impressive debut for the Yellowjackets last season which culminated in her being named GNAC player of the week for December 17-23 and all-GNAC honorable mention as a finalist for GNAC freshman of the year. Shelley led the squad and ranked third in the conference in rebounding with 8.2 boards per contest. She also led the team and ranked second in the GNAC in blocks per game with 1.8 for a season block total of 48, eighth most in MSUB single-season history.

Shelley averaged 11.1 points to rank fourth on the ‘Jackets and played in all 26 games with 22 starts. She shot 48.0 percent from the floor, ranking No. 16 in the GNAC, including 45.2 percent from long range. Shelley finished with six double-doubles, which was tied for fifth most in the GNAC. She reached 20 points in two games and double figures in 15 games. Her season high scoring total was 25 points on February 7 against Alaska.

Collins and Shelley are the seventh and eight Yellowjackets to receive preseason all-conference honors since the award was established prior to the 2012-13 season. Among their predecessors are three time selections Alisha Breen and Janiel Olsen, two time picks Bobbi Knudsen and Kayleen Goggins, 2017-18 senior Rylee Kane, and 2018-19 senior Vanessa Stavish.