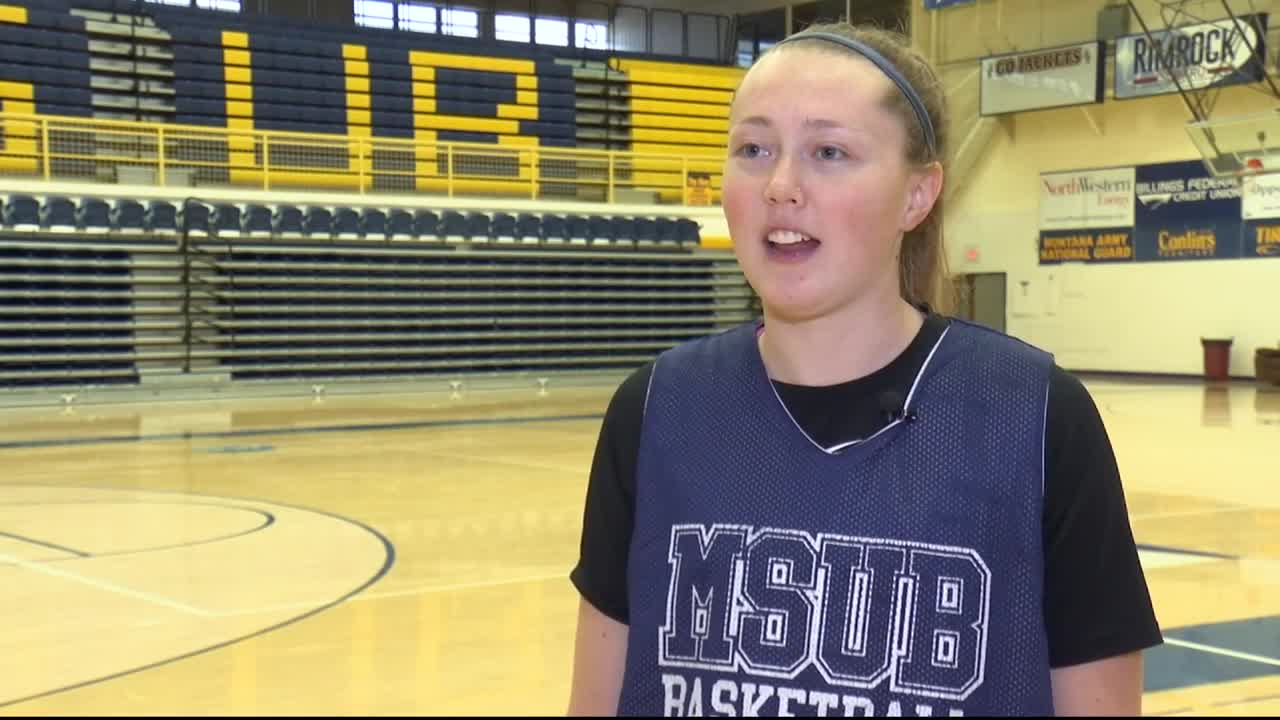 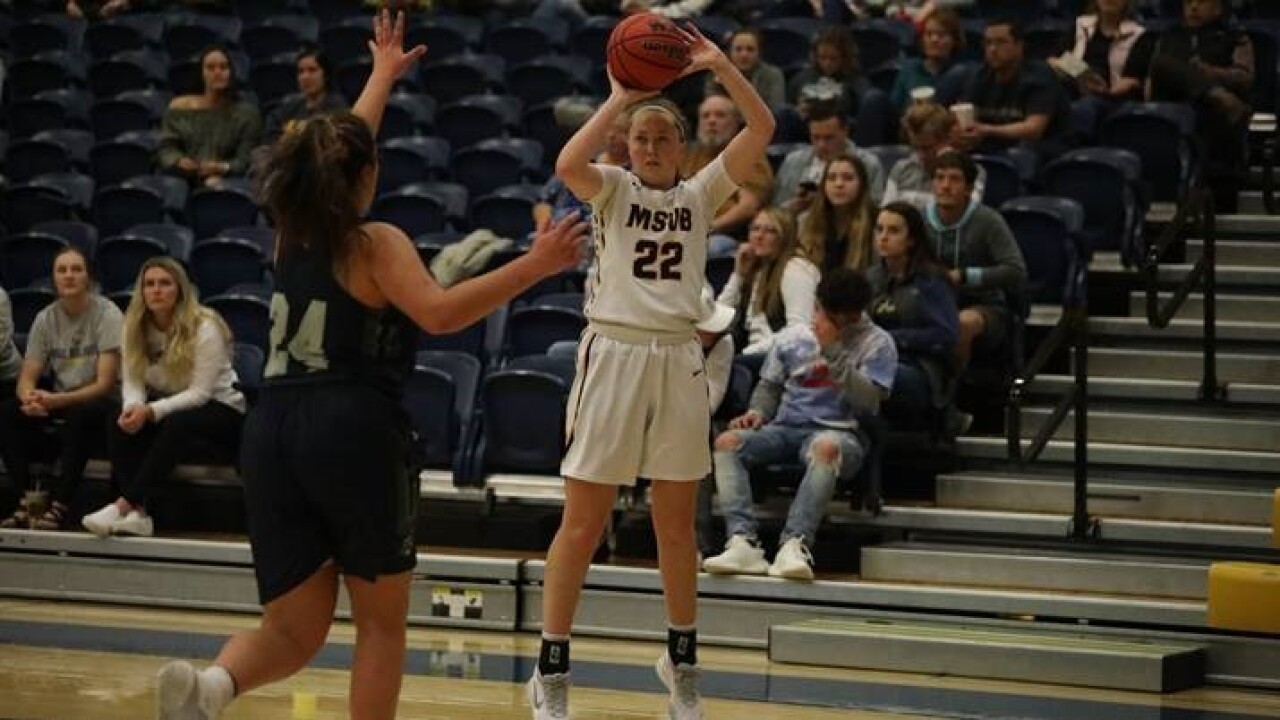 BILLINGS – With just four games remaining in the regular season, this week’s road matchups against Saint Martin’s University and Seattle Pacific University will be extremely consequential for the Montana State University Billings women’s basketball team. The Yellowjackets currently hold the sixth and final post-season position in the Great Northwest Athletic Conference, on their quest to continue a trend of qualifying for the GNAC Championships once every two seasons.

Thursday night, MSU Billings (13-12, 8-8) tips off against a hot Saints squad, which has won each of its last four outings and maintained pursuit just one position below the cut line. Saturday, MSUB must fend off another the squad still in the hunt; the Falcons at 4 p.m. Fans can watch both road games online via links on the MSUB women’s basketball schedule page [msubsports.com].

“I like where we are at right now and I feel we are playing our best basketball at the right time,” commented MSUB head coach Kevin Woodin. “The challenge will be to take our home success over the past two weeks and transfer that to the road. We are healthier than we’ve been in a long time which is nice heading into the final two weekends.”

LAST TIME OUT: The ‘Jackets closed out a four-game homestand 3-1 with wins over Western Oregon (87-75), Concordia (74-50), and Alaska Fairbanks (103-59). MSUB impressed on Saturday with their highest point total in over a decade but played perhaps even better in an 83-69 loss to No. 8 ranked Alaska Anchorage Thursday night. Hannah Collins led the way against the Seawolves with 17 points and four assists and MSUB kept the score within a dozen until the fourth quarter. Jeanann Lemelin, Taryn Shelley, and TyLee Manuel also made it to double-figures but the ‘Jackets came up short of their upset bid in front of a raucous home crowd.

Redemption came Saturday and after shooting out of the gate with a 16-2 run, MSUB closed out UAF and nearly doubled their point total. Shelley performed well against and narrowly missed her 11th double-double with a team high 21 points and nine rebounds. Freshmen Shayla Montague (10 points, seven rebounds, five assists) and Manuel (18 points, six rebounds) coalesced arguably their best games of the year.

“Both Shayla and TyLee have become much more consistent over the past month and it has contributed to our team success,” said Woodin. “We need them to continue to grow as players, especially defensively and I think they can contribute a lot over these last few games.”

SHELLEY DOUBLES DOWN: Forward Taryn Shelley won honorable mention all-GNAC a year ago and followed with an impressive sophomore campaign. She currently leads MSUB and ranks ninth in the league with 13.5 points per game. Shelley is also third in rebounding at 8.6 rpg with 10 double-doubles to her name, already four more than last season. With 13 or more points in each of the past five games, Shelley also scored a season high 29 points against Cal Poly Pomona in November.

TAKING CHARGE: Captain Jeanann Lemelin, a senior guard from Billings, Montana continued to make her case for GNAC defensive player of the year on Saturday when she set her feet and was sent flying to draw an offensive foul call against Alaska Fairbanks. Lemelin has taken 28 charges this season, according to the team tally inside the locker room door. That is better than one charge taken per game for the only member of the team to start every game this season. Lemelin was forced to the bench to recover Saturday against the Nanooks. At the time of the call, MSUB led by more than 20 points. The next player on coach Woodin’s locker room chart is at seven.

“Seniors are really important this time of year,” Woodin said. “It’s their team and they need to lead us on and off the court. We are very fortunate to have three great ones who are both focused and goal oriented. They want to put out maximum effort to try and reach our team goal of making the tournament. I encourage them to enjoy the journey at the same time.”

GNAC RANKS: Three Yellowjackets rank inside the top-20 scorers in the conference. Shelley (13.5 ppg) is ninth with Collins (12.4 ppg), and Lemelin (11.1 ppg) not far behind. Shelley is third in rebounds averaging 8.6 boards per contest. Freshman Shayla Montague comes in 21st at 4.5 rebounds per game. Lemelin and Collins are tied for 10th in the league with 2.8 assists per game, though Lemelin has a slight edge overall with 69 total assists. Collins tops the team and is 11th with a .788 free throw percentage (63-for-80). Lemelin slipped to a tie for fifth with her 1.8 steals per contest.

MSUB does not top the conference in any statistical category. However, they are third in 3-point percentage (.343), fourth in assist to turnover ratio (0.9), fifth in blocked shots (3.1), and fourth in defensive rebounding (26.4).

LONG RANGE: The Yellowjackets have a balance of inside and outside shooting and their 3-point percentage has gradually increased over the course of the season to third best in the conference. Lemelin leads the team with 53 made 3-pointers on 138 attempts (.384). Among starters, Collins holds the best percentage (.402) with 39 makes on 97 tries. Both Cunningham and Montague have knocked down threes in clutch situations and each have 33 made from beyond the arc so far. Off the bench, Addison Gardner is 10-for-21 (.476).

CONFERENCE AT A GLANCE: No. 8 Alaska Anchorage has won seven straight and holds a 15-1 record in the GNAC for first place. The Seawolves are home this weekend to face Simon Fraser and Western Washington and have already locked up a spot in the GNAC Championships along with second place Northwest Nazarene. The Vikings (11-5) and Clan (11-5) are tied for third place with Central Washington (9-7) and MSU Billings (8-8) within range. Saint Martin’s (8-9) continued to charge up the standings with a 63-58 win over Seattle Pacific Tuesday night.

“Of course our players are aware of where we are in the standings,” Woodin said. “At the same time they know it’s important to keep the focus on one game at a time and having good practices to prepare. I like how our team has matured over the last month and I am excited about the challenges ahead of us.”

The Saints host MSUB riding a four-game win streak and a 10-2 home record. Tuesday night, SMU came back from a third quarter deficit to win a crucial game against the Seattle Pacific Falcons behind a 16-point performance by freshman Janealle Sutterlict. The Saints moved to within a half game of the ‘Jackets with their latest win.

Bria Thames leads the team with 14.8 points per game and 11.4 rebounds. The senior forward became a force this season after averaging 7.0 points and 5.5 rebounds a year ago. Sophomore Clare Dingus is another player to start every game at forward and ranks second on the squad with 12.5 points and 9.0 rebounds. Dingus also leads the team with 38 steals.

“I’m really impressed with the improvements Saint Martin’s has made since last year,” Woodin said. “They are playing at a high level right now. They have a talented team that is very good on the boards along with solid perimeter players. I would not be surprised if it is another close game this time. We have to execute and get quality possessions in order to win.”

THE SERIES: The ‘Jackets defeated SMU 72-64 in Billings on January 25. Lemelin scored a career high 30 points and tied the school record with eight made 3-pointers. Seven of her eight threes came in the second half and proved to be the difference in a closely contested game. Head coach Kevin Woodin called it “an awesome team win for our program” and “a game to remember.” With a series sweep over the Saint last season, the Yellowjackets are 29-11 all-time against SMU and 13-9 in Lacey, Washington.

The Falcons’ playoff chances took a hit Tuesday night in their loss to SMU. However, they remain in the hunt with three games remaining in the regular season, 2.5 games behind MSUB for sixth place. Sophomore guard Ashley Alter returned to the lineup and scored 13 points in the loss. Bayley Brennan scored a career high 12 points last time out against MSUB. On January 23. The Falcons rank ninth in the league in points (61.4 ppg), seventh in team defense (66.1 points against), second in free throw percentage (.754), fourth in 3-point percentage (.319), and fifth in rebounding.

“Seattle Pacific has a lot of experience and depth at the guard position,” Woodin said. “What impresses me is their offensive movement and the variety of players that can score 15 points on any given night. They’ve been playing much better lately too.”

The Falcons have lost five of their previous six games with a 55-53 win over Western Oregon University mixed in on February 13.

THE SERIES: The Falcons bested MSU Billings 69-63 at Alterowitz Gymnasium on January 23, only the third time this season the ‘Jackets have been defeated on their home court. SPU used late 3-pointers by Brennan and clutch free throws in the final minute to close out the victory. The two teams split the season series in 2018-19 and the Yellowjackets hold a 22-33 all-time mark against Seattle Pacific and are 5-22 at Brougham Pavilion since 1985.