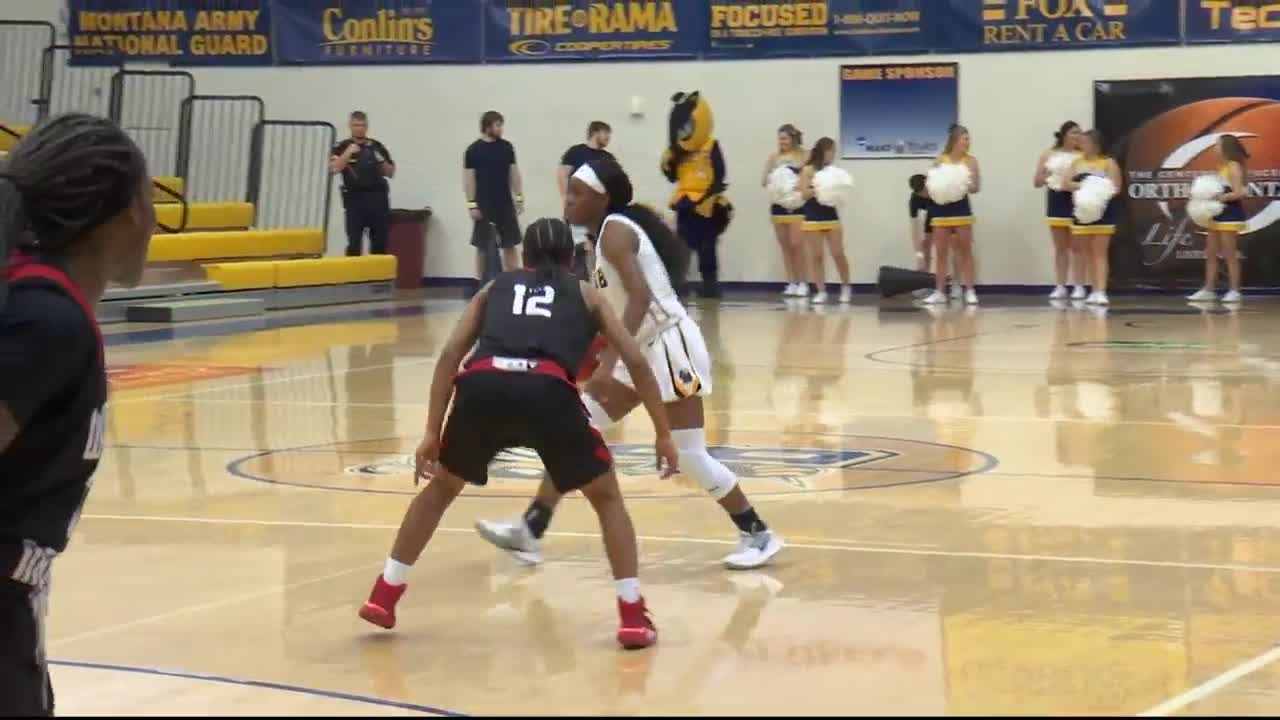 Taryn Shelley finished with 23 points, 14 rebounds, and two steals for her eighth double-double while Jeanann Lemelin continued her spree of hot shooting with 20 points and five 3-pointers for MSUB. Lemelin and fellow senior Taylor Cunningham drained 3-pointers on back-to-back possessions late in the fourth quarter to help send the game to overtime. The ‘Jackets then outscored the Wolves 16-4 in the extra session to cement the victory.

“I was proud of our team for fighting back tonight and coming back from a 10-point deficit in the fourth quarter,” said MSUB head coach Kevin Woodin. “We played our best basketball when we needed it most and this was a great win for our program.”

Shelley carried the team in the first half with 12 points and five rebounds and the ‘Jackets trailed 31-30 heading into the break. Western Oregon shot 40-percent through 20 minutes compared to 33-percent for MSUB but suffered from 10 costly turnovers.

“In the first half we had some good opportunities to score but just weren’t converting,” said Woodin. “Our defense kept us in the game. Give credit to WOU. They played hard and I thought Keyonna Jones was terrific.”

The Yellowjackets struggled to contain Jones in the third quarter as the Wolves padded their advantage to a 10-point differential. Jones finished with 28 points with 12 of 13 free throws, five rebounds, and one assist. MSUB controlled the fourth quarter and scored 28 points to eventually tie it. The Wolves in-bounded the basketball with 2.9 seconds on the clock for a final shot attempt, but Lemelin drew a charging call to cause a turnover. With under two seconds to shoot, the ‘Jackets failed run a play, leading to overtime.

Cunningham swished two free throws to give MSUB its final lead 40 seconds into overtime. Shelley and Lemelin pitched in points in penultimate possessions and Hannah Collins stretched the advantage to 11 with a pair of made free throws. Western Oregon attempted a counter-strike but struggled to score from the 3-point line. The ‘Jackets dribbled out the ball with under 10 seconds remaining.

“Offensively, we got the ball into the paint consistently and Taryn delivered for us,” said Woodin. “Then in the fourth quarter and overtime, our defensive rebounding improved and we scored in transition which was critical. Our seniors Jeanann and Taylor hit some clutch threes late in the game and Hannah came through for us at the free throw line.”

Lemelin posted her fifth straight game of 10 points or more with 20. She also connected on 5-for-8 long-range tries and made it to 100 career steals with three against WOU. Collins notched 17 points with six rebounds and made 10 of 11 free throws over 34 minutes.

“We started out pretty slow,” commented Lemelin after the game. “Our shots just weren’t falling but I thought we did a really nice job being resilient and coming back in the second half. Taryn was amazing in the first half and we were able to get the ball inside to her early. At halftime we knew we needed to buckle down and find a way to win this one.”

The Yellowjackets received 17 points from their bench, including 10 from Danielle Zahn and three each from Janessa Williams and TyLee Manuel. MSUB shot 42.6-percent (29-for-68) from the field and 50-percent (9-for-18) from 3-point range with 36 points in the paint.

Western Oregon struggled mightily from the 3-point line and connected on just 10-percent (2-for-20) in the contest. Hovering around 40-percent shooting for most of the evening, the Wolves dropped to 37.5-percent overall after going 2-for-10 in overtime. Tresai McCarver and Shariah Green finished with 13 points apiece.

The Yellowjackets are alone in sixth place in the Great Northwest Athletic Conference, two games behind Central Washington University (8-5) for fifth and one game clear of Seattle Pacific (5-8), who represents the first team out of the post-season at the moment.

THE BUZZ: Taryn Shelley was named St. Vincent Healthcare player of the game for the Yellowjackets…MSUB moved to 8-2 at home this season. “It’s just so nice to be home,” said Lemelin. “We’ve been on the road for what feels like forever so being able to play here in front of our home crowd gives us confidence and makes it fun.”

UP NEXT: The Yellowjackets take on Concordia University Saturday at 7 p.m. at Alterowitz Gymnasium in game two of a four-game homestand. Ticket can be purchased at the door or by calling the athletic department. Live stream and statistics will also be provided.

The Yellowjackets men fell to the Central Washington Wildcats on the road Thursday night. MSUB has now lost five of their last six and the Great Northwest Athletic Conference playoffs are slowly shrinking away in the distance.

The Yellowjackets (9-12, 4-9 GNAC) were in need of a win tonight to keep pace and try to grab the sixth and final playoff spot in March. The loss drops MSUB into a tie for ninth and the road does not get any easier. The Yellowjackets will need to muster some late season magic if they hope to reach the post season.

The Yellowjackets jumped out to a 10-2 lead to start the game, but CWU remained resolute and took the lead at 19-18 after a Jeryn Lucas three point shot. The Wildcats would surrender the lead briefly then retake it 22-20 and never look back. CWU would go into halftime with a 32-25 point lead.

Cold shooting and a Wildcat on fire would prove to be too much for MSUB to overcome. Collectively the ‘Jackets shot 4-28 (14.3 percent) from three point range and Lucas scored 27 points on 10-12 from the field with seven threes for CWU.

MSUB would bring it to a two possession twice in the second half with the final attempt to overcome CWU at 41-35 after a Psalm Maduakor jumper with 11:36 left. CWU would extend their lead back to 12 just three shot minutes later and cash in their largest lead at 65-49 with 1:33 remaining. With the 67-56 point win, CWU avenged their loss at the hands of MSUB and Tyler Green earlier this year when Green beat CWU on a buzzer beating three point shot in Billings, Montana.

“The difference was we did not shoot the ball well from three point range,” commented head coach Mick Durham. “We competed and played defense about as well as we have all year but Lucas was unbelievable too. He hit tough shots and his 27 points was the difference.”

The Wildcats forced 14 Yellowjacket turnovers and surrendered nine of their own. Off those 14 turnovers, CWU was able to cash in 19 points and MSUB was only able to score four off of CWU’s miscues.

“The difference was we did not shoot the ball well from three point range,” commented head coach Mick Durham. “We competed and played defense about as well as we have all year but Lucas was unbelievable too. He hit tough shots and his 27 points was the difference.”

WHAT’S AHEAD: The Yellowjackets travel to Nampa, Idaho for a game against Northwest Nazarene University. CWU just defeated NNU 64-59 this past Tuesday. NNU beat MSUB 85-72 in Billings on January 9.