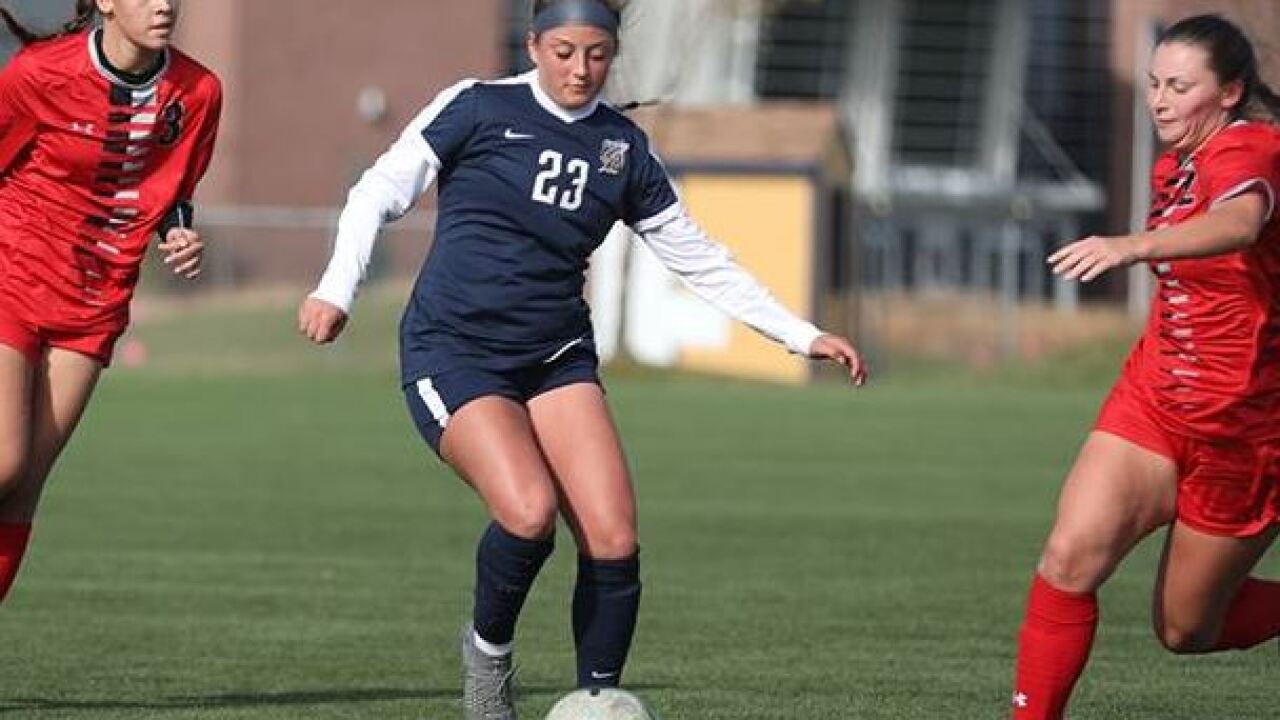 BILLINGS – Tied in the closing seconds of overtime, Maddie Wolff put away the winning goal as Saint Martin’s University slipped past Montana State University Billings 2-1 in women’s soccer Thursday afternoon at Yellowjacket Field in a Great Northwest Athletic Conference game. The Yellowjackets outshot the Saints 23-4, including 11-1 in the second half, but Julia Keller was the only MSUB goal scorer. Keller picked up her first of the season in the 49th minute of the contest.

The offensive effort started slowly in the first half for both teams, but MSUB managed three shots on goalkeeper Ali Compigotto, who was equal to the task. Keller got behind the defensive line in space to begin the second half and received a through pass from Haylee Gunter to give MSUB a 1-0 lead.

Natalie Brown evened the score just under five minutes later when she found enough room for a high shot at the top of the box after passes from Shea McKnight and LeAnn Phanakhone. The ‘Jackets failed to clear the ball out of the box moments before, causing the crucial turnover.

MSUB mounted more shot attempts in the second half. Keller led the charge with 10 attempted shots in the game and six on goal, but the ‘Jackets failed to muster a second tally, leading to overtime. After ten minutes of extra time and a change of sides, both teams created chances on goal to score but did not end the game. Finally, Wolff’s shot from 35 yards out on the left side of the pitch with three remaining seconds went to the back of the net past MSUB goalkeeper Erinn Harder.

“This was a heartbreaking game,” said head coach Stephen Cavallo. “We created enough chances to win but we didn’t take them. Credit has to go to their goalkeeper who made at least four or five incredible saves. We definitely missed our opportunities to clear the ball out when we needed to. To give up a goal with three seconds left in the game is a tough pill to swallow.”

Campigotto picked up the win for SMU with 13 saves and one goal against. Harder made one save in the loss, though one shot also rattled off the post. Gunter and Courteney Shovlin each recorded two shots on goal for the ‘Jackets.

MSU Billings remains home Saturday for a matchup against Seattle Pacific University at Yellowjacket Field at 12 p.m. The Yellowjackets (4-7-2, 3-5-0 GNAC) lost their third straight game and stand fifth in the GNAC with nine points. Saint Martin’s (3-9-2, 1-6-0 GNAC) are tied with Simon Fraser for eighth place with three points.

“We’ve got to keep plugging away,” Cavallo said. “We have SPU coming here on Saturday so we don’t have time to feel bad about ourselves. This is part of the game and part of life. This is when our character is tested the most.”

THE BUZZ: Keller was named St. Vincent Healthcare player of the game. Keller has four career goals, including three in 2018 and one in 2019…The ‘Jackets have a rematch against the Saints in Lacey, Washington on November 9.

MSUB's men created scoring chances and even a penalty kick, but failed to capitalize in a 2-1 home loss to conference leading Western Washington at Yellowjacket Field. The Vikings moved to 5-0-1 in the GNAC with the win while the Yellowjackets slipped to 3-2-1 in a three-way tied for second.

Western Washington goalkeeper Brandon Locke made the save on a first half penalty kick by Shantik Bedrosian, after he dove to his right. Later, Locke stopped a point-blank shot by Cole Hage to keep WWU in front 2-1 and preserve the win.

MSU Billings (6-5-2, 3-2-1) had an opportunity to take away Western Washington’s lead in the standings but instead moved further away with their second home defeat. WWU inched closer to a National ranking after receiving votes in last week’s United Soccer Coaches Division II poll.

“Unfortunately we had the penalty kick and a couple of other chances to go ahead first but we didn’t score first,” commented head coach Thomas Chameraud. “We knew set pieces were one of WWU’s strengths from studying film. I didn’t feel we made a mistake, but they had the size advantage over us that made the goal. It’s a bit frustrating because I felt the guys played well and deserved a better result but we just have to move on and try to win the next one.

After MSUB gained a scoring opportunity on Bedrosian’s penalty kick in the 20th minute, Camron Miller scored for WWU to go ahead 1-0 in the 42nd minute. Georg Cholewa floated a corner to the far post, where it was headed in by Camron Miller for his third marker of the fall.

The Vikings added their second goal in the 62nd minute. Cholewa took a free kick near the corner on the left side of the field and Ryan Shaefer hammered it through for his sixth season goal.

The Yellowjackets responded in the 74th minute to get back within one. Bryan Maxwell received a pass from the corner on the far side of the box and connected. Luca Battistotti tallied an assist on the play.

The Yellowjackets continued to press forward but were stopped short by the Western Washington back line, resulting in a 2-1 final score. WWU outshot the Yellowajckets 10-7 and held a 6-4 edge in shots on goal.

MSUB goalkeeper Jessy Martin made four saves in the loss. Locke remained unbeaten at 6-0-1 in goal for the Vikings.

“The closer we get to the end of the season, the more important it is going to be to get points,” Chameraud said. “We lost three points at home which means we didn’t meet our goal, but we still have opportunities at home to get more points next time.”

WWU’s Drew Farnsworth led all players with four shot attempts, two landing on goal. Theo Lamare was the only ‘Jacket to record multiple shot attempts after he finished with two. Western Washington earned six corner kicks compared to four for MSUB. Both teams marked four fouls apiece and Miller was the only player to be issued a yellow card for either side.

UP NEXT: The Yellowjackets continue their five-game homestand Saturday, October 26 at 3 p.m. when they host Northwest Nazarene University for MSUB kicks cancer day at Yellowjacket Field.

THE BUZZ: Bryan Maxwell was named St. Vincent Healthcare player of the game after scoring his second goal of the fall.