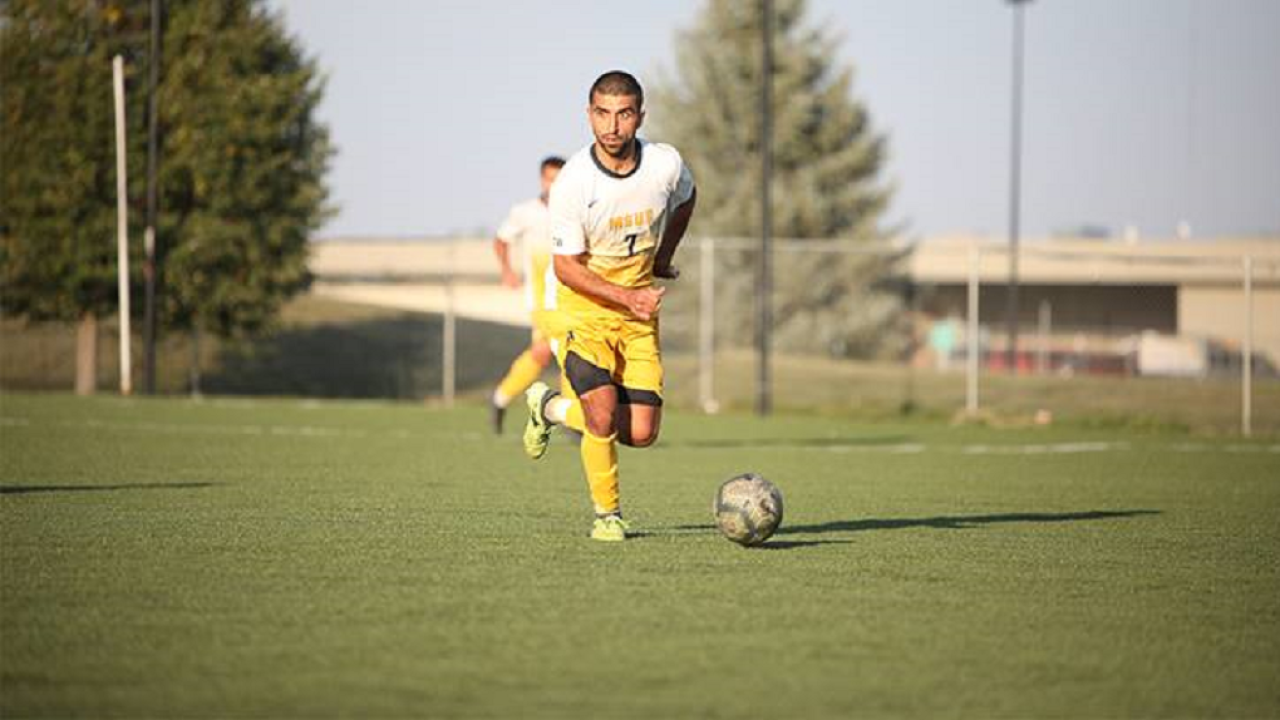 SFU's Jenieva Musico made a long run up the right side of the field and slid a slow shot under charging goalkeeper Erinn Harder to give the Clan a 1-0 in the 14th minute. The Jackets struggled to find the offensive half before the break, but began generating chances on goal in the second half, culminating in Gunter's tally in the 83rd minute off a pass from Erin Reynolds.

With traffic near the top of the box, the Yellowjackets committed the foul that resulted in Zuarrini's game winner. On the penalty, Zuarinni hooked a left footed kick to her left and found the inside of the post with Harder diving in the opposite direction.

The Yellowjackets narrowly out-shot the Clan 7-6 with six shots on goal compared to four. Nicole Anderson made five saves to collect the win in goal for Simon Fraser. Harder suffered the loss and made two saves for MSUB. Erin Reynolds passed the ball to Gunter who took the kick from 18 yards outside the top of the box.

MSU Billings found success on set-piece defense and did not surrender a corner kick in 90-minutes against SFU. On the offensive end, the 'Jackets were stymied on six corner attempts. The Jackets committed six fouls compared to 14 assessed to the Clan.

With the loss, the Yellowjackets stayed in fifth place with 12 points. With one game remaining in the regular season and a point differential of seven against Central Washington, MSUB will miss the GNAC tournament for the fourth straight season. Simon Fraser (2-12-1, 2-9-0) improved to a tie for last place with Saint Martin's University in the GNAC standings.

The Jackets finish the two-game road trip with a visit to Lacey, Washington and the campus of Saint Martin's University Saturday, November 9 at 1 p.m.

With under five minute remaining in an extra session, Mark Talisuna polished off the only goal of the game as Simon Fraser University suppressed MSUB's men 1-0 at Terry Fox Field and eliminated the ‘Jackets from post-season contention. It was Talisuna’s goal, off a corner kick cross from Peder Syvertsen, which broke up the defensive deadlock.

MSUB and SFU appeared destined for a second straight 0-0 overtime tie this fall and the two teams combined for just six shots on goal in 105 minutes on the pitch before SFU’s marker changed the outcome.

“Tonight’s game hurts a bit because our players did everything we asked them to,” said MSUB head coach Thomas Chameraud. “We knew it was going to be a close game and a set piece could be the key. We scored on one but it was unfortunately disallowed and then we conceded another corner kick. Our players worked really hard and we limited SFU’s offensive players to a minimum number of chances. We have to keep our heads up and prepare ourselves for Western Washington.”

The Yellowjackets looped the ball inside the box on frequent occasions but failed to connect for shots on goal in most cases. With three minutes left in the first half of overtime, Christian Thode floated in a corner kick and eventually found Yaniss Aka within 15 yards of the frame, but Aka’s shot was blocked.

In the 104th minute, Simon Fraser countered with a corner and deceptive shot, which required goalkeeper Jessy Martin to punch it out just below the crossbar. Less than a two minutes later, Talisuna scored.

Set pieces factored in for both teams, but neither could convert in regulation. MSUB earned seven corner kick opportunities while Simon Fraser took 10. The Jackets stuck with Luca Battistotti, Andrew Rivera, and Bryan Maxwell on defense, all of whom played a full 105 minutes. Samuele Folla, one of the Yellowjacket anchor defenders played just 40 minutes.

In the offensive half, Shantik Bedrosian led MSUB with three attempts. Thode and Theo Lamare were the only players to mark shots on goal. Matteo Polisi, Marcello Polisi, and Talisuna had two shots attempts apiece for the Clan.

Aiden Bain made two saves at goalkeeper for SFU and earned a win and a clean sheet. Jessy Martin was tagged with the loss after surrendering one goal and making three saves.

The Yellowjackets travel to No. 19 Western Washington for their next game Saturday, November 9 at 7 p.m. Simon Fraser (8-4-1, 5-3-1 GNAC) moved into a tie with the Yellowjackets for second place with 16 points but the Clan has played one fewer game.

Notes: Shantik Bedrosian was named St. Vincent Player of the game for MSUB…The Yellowjackets have never won against the Clan in Burnaby and fell went 0-1-1 in the 2019 season series against SFU.