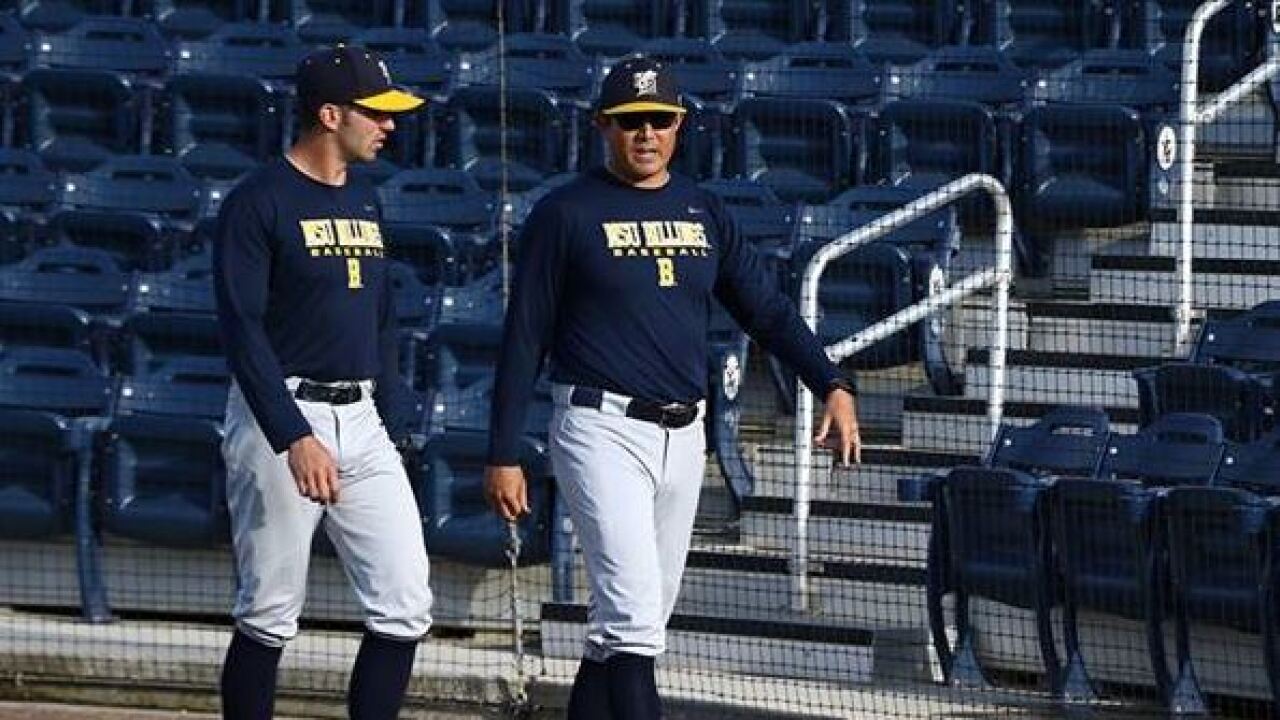 BILLINGS – After piloting the Montana State University Billings men’s baseball program for three seasons, head coach Aaron Sutton is leaving the program to take a post as manager for the Minnesota Twins high A affiliate, the Fort Myers Miracle, announced the department Thursday. Assistant coach and recruiting coordinator Ryan Wright will also leave his post after three seasons to become a minor league hitting coach for the Toronto Blue Jays.

“I want to congratulate Coach Sutton on his soon to be new role with the Minnesota Twins, and I am not at all surprised they came after him,” said MSUB athletic director Krista Montague. “Any organization at any level would be lucky to have Aaron on their staff, and we feel very fortunate he was part of our Yellowjacket Family for the past 3.5 years. I think any time we lose a coach to another quality program or organization, it is nothing but a compliment to what have going on here at MSUB. Coach Sutton and coach Wright leave this program in a great place, and thanks to them, we are confident we will be able to attract quality coaches to build on the incredible foundation laid for this team. I want to sincerely thank Coach Sutton for his dedication and commitment to MSUB; and wish him, his wife Kristen, and son Decker all the best in the years to come. I also want to thank Coach Wright for his work and wish him well with the Toronto Blue Jays. “

Sutton owns a record of 89-67 (.571) with MSUB and has gone 80-40 in conference games (.667) since being named head coach. He was awarded GNAC Coach of the Year in 2019, after helping the Yellowjackets to their fourth regular-season title in the last five seasons. Sutton also led MSUB to its first-ever GNAC Championships title, and the program’s first-ever berth into the NCAA Division II West Region Championships.

With Sutton and Wright at the helm, the Yellowjackets tied the school record for wins in 2019, and broke the GNAC record for conference wins after going 30-10 in league play. Under Wright’s guidance as hitting coach, Daniel Cipriano became the second consensus All-American in program history and the second player in school history to win GNAC Player of the Year honors.

After their time playing under Sutton and Wright, Kaleo Johnson and Adam Cox were selected in the 2018 Major League Baseball draft. Johnson was selected in the 32nd round by the Tampa Bay Rays and Cox was picked in the 25th round by the Philadelphia Phillies. Both are still in pursuit of major league dreams.

“Beyond the on field success, which included championships, all-Americans, and MLB draftees, Coach Sutton fostered an environment for young men to be good students, good people, and overall well-rounded and service-minded individuals,” Montague said. “I always appreciated his approach and will miss him on our staff.”

MSU Billings has not announced immediate plans for the next head coach and assistant coach of the baseball team, though Sutton and Wright plan to stay on to help in the transition until January 2. Assistant coach/pitching coach Riley Drogesen as well as assistant coach Matt Hape remain on the coaching staff as well.

“First and foremost would like to thank the players. They make this place special and I want them to know they had just as big an impact on my family as we did on them. I would also like to thank all of our coaches who put more time into this place than their own lives at times. Lastly, I want to thank my wife for all her patience and support throughout our time here in Billings. We are excited about this new opportunity, but MSUB will always have a special place in our hearts.”

“It’s bittersweet for us to make this move and a difficult decision because the people at MSUB make working here so special. The current team is filled with tremendous young men who made our jobs so rewarding. This team is prepared to make another jump in the right direction and I know both Ryan and I are going to be following closely their success this season. We have always shared ownership of the program between coaching staff and the players and our goal has always been for the players to ultimately become the leaders of the program. That end is coming a little sooner than planned, but I know there is tremendous leadership in that clubhouse that is going to do special things come spring.”

“Our time at MSUB has been filled with nothing but positive memories. Our family has truly come to love the city, the school, administration, and athletic department. MSUB is a place that you can build, develop, and grow. The support from Krista and Chancellor Edelman is something you don’t get everywhere. Their belief in our vision and passion to have a successful baseball program is second to none and we couldn’t have accomplished what we did without their support. We said it last year when we ended the NCAA Regional, but we truly believe that ‘Jacket Baseball is just getting started.”

“First off, I can’t thank Krista enough for giving me the opportunity three years ago to be a part of the Jacket family. She has given both Aaron and I tremendous support while leading this program and played a huge role in our team’s success. This decision to move on was not an easy one, but this program is in a great spot and I am excited to see what this year’s group accomplishes come spring time.“

“To the players, past and present, thank you for putting your trust in me as a hitting coach and taking the time to build relationships with myself and one another that will last a lifetime. All the time spent working and learning from one another, and the memories made are why this job is so special to come to every single day.”

“Lastly, I owe the biggest thank you of all to Aaron Sutton for taking a chance on me at 23 years old to come build this program together and giving me the freedom to learn and grow. This program is set to head towards new heights and it’s because of the vision coach Sutton gave these players and myself since day one.”