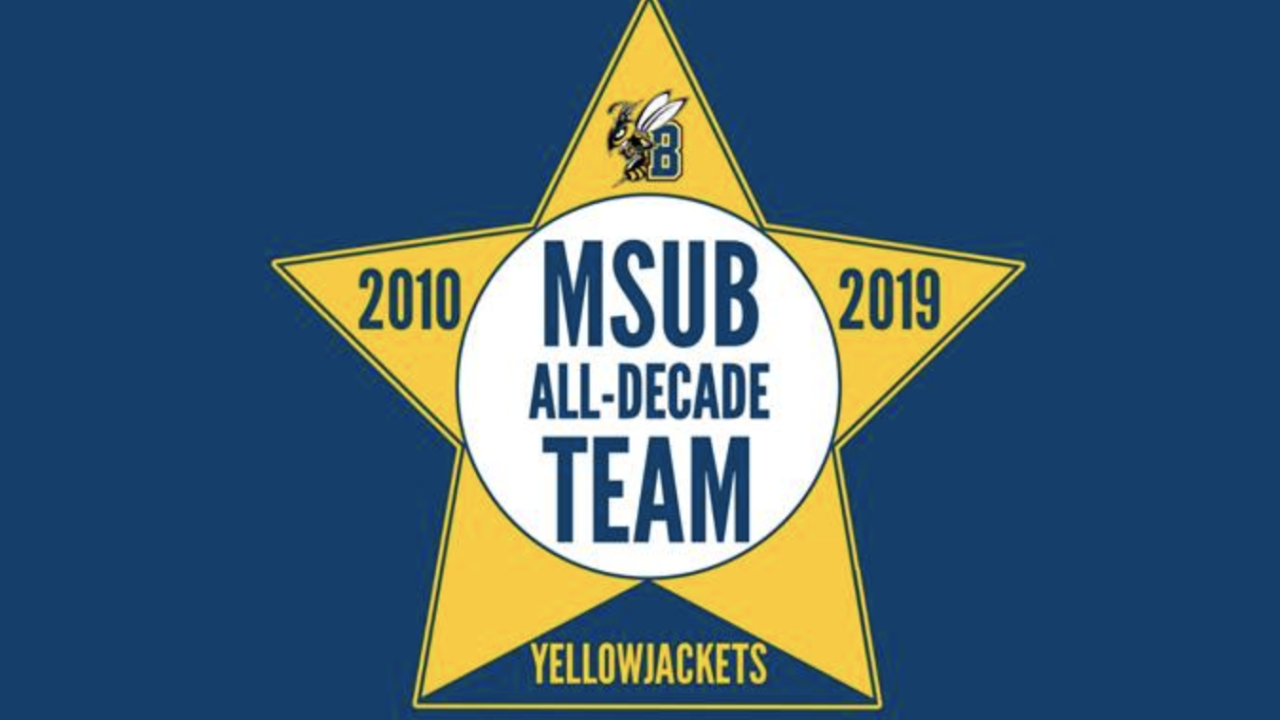 BILLINGS – The top student-athletes from each of Montana State University Billings’ current varsity athletic teams from 2010-2019 have been selected, and 14 all-decade teams will be revealed throughout the course of the fall.

Each sport’s all-decade team is comprised of the top-performing student-athletes, with weight given to individual athletic achievement and accolades, team achievement, academic achievement, as well as community service. For purposes of this project, the decade is defined as the spring of 2010 through the winter of 2019. For fall and spring sports, it spans the seasons 2010 to 2019, and for basketball it includes the 2010-11 to 2019-20 seasons.

“It is important to recognize and honor our rich history, and the creation of the all-decade team will help us achieve this goal,” said MSUB director of athletics Krista Montague. “So many Yellowjackets have come before us and thousands will follow, and I am proud we are taking a moment to recognize some of those who have helped build a solid foundation for our athletics teams. This recognition ties nicely into our celebration of being a member of the NCAA Division II association for 40 years as well. It will be fun to take a trip down memory lane, and we are looking forward to engaging our student-athlete alumni in this way.”

Each sport’s all-decade team is comprised of a starting lineup, bench or reserve players, as well as an honorable mention list. Each team also has a designated captain, who is the Player of the Decade for their individual sport. Once all 13 team sport all-decade teams have been released, a special all-decade captain’s team will be released containing the top player from each sports team. Finally, a Player of the Decade will be selected from the captain’s team, representing the top MSUB student-athlete of the decade across all sports.

The all-decade teams were selected internally, with the consultation of coaches past and present as well as those close to the programs. A wide variety of factors were considered when putting the all-decade teams together, and the process of making the selections proved more often than not to be a difficult task. In most cases, individual achievement, statistics, and accolades were the most heavily weighted factors in evaluating players. Typically but not in all cases, those players who ranked highly in career statistical categories or who hold school records will appear on the all-decade teams.

Team achievement during a player’s career was another major factor in selection. For example, a player whose team won a conference title or appeared in multiple conference or regional championship tournaments will likely be given preference over a player of equal individual achievement whose teams did not perform as well.

Career span and dedication to the program were two more factors considered. For example, a four-year starter and all-conference caliber player who was cited by coaches as an excellent teammate may have been given preference in some cases over an all-region caliber player who only competed for a single season. In order to maintain consistency throughout the selection process, hypotheticals or ‘what-if’ statistics were not considered. If a player competed for two seasons and was on pace to break records, but departed the program, there was no consideration given to what he or she ‘could have’ achieved had they played a full four-year career.

For almost every sport, there were athletes deserving of all-decade consideration who played a portion of their career in one decade, and a portion in the other. In general, the totality of an athlete’s career was considered regardless of when accolades or achievements were attained. However, there were a handful of cases where seemingly deserving athletes were left off for a few reasons. For example, Samantha Boehm is a hall of fame women’s soccer player, whose career spanned from 2006-2010 (five seasons including a redshirt year). Although she competed for one season during the 2010-2019 decade, the vast majority of her hall of fame career occurred during the 2000-2009 decade. She would certainly be a lock for the previous all-decade team, and rightfully earn her recognition. In cases like this where a hall of fame player touched the 2010-2019 decade, the compromise settled on was to place them on the honorable mention list in order to both recognize them and reserve one of the highly exclusive spots on the team for a deserving athlete who would not have the chance to be considered for two separate all-decade teams (for example, someone who played from 2011-2014).

Deserving athletes who are actively completing their careers were not precluded from all-decade consideration. In general however, a current athlete should have played for at least two seasons during the decade to be considered. That is to say, a current athlete whose only year in the decade was 2019 would likely not be considered aside from unprecedented achievement. This also leaves open the potential for an athlete who begins their career in 2019 to be selected to the 2020-2029 all-decade team, as three of their seasons will take place in the upcoming decade.

The goal of selecting all-decade teams was to honor the all-star Yellowjackets and reflect positively on the 2010s decade across all sports. An inevitable result of splitting hairs between top players and making tough decisions regarding starting lineups is differing opinions when it comes to the selections. We hope the release of all-decade teams will spark spirited conversation among alumni, family, and fans to reflect on their favorite players and also to consider how they may have selected their own all-decade teams. There were many decisions that were too close to call or debatable depending on which aspects of the parameters were given the most weight. In a sport like softball for example, there may be three or four first basemen who are all perhaps worthy of a starting spot, whereas there may only be one shortstop who is on par with all-decade requirements. But, just as a soccer coach is at the mercy of the positions he is allotted – you can’t have eight forwards in your starting lineup – the all-decade teams reflect this nuance.