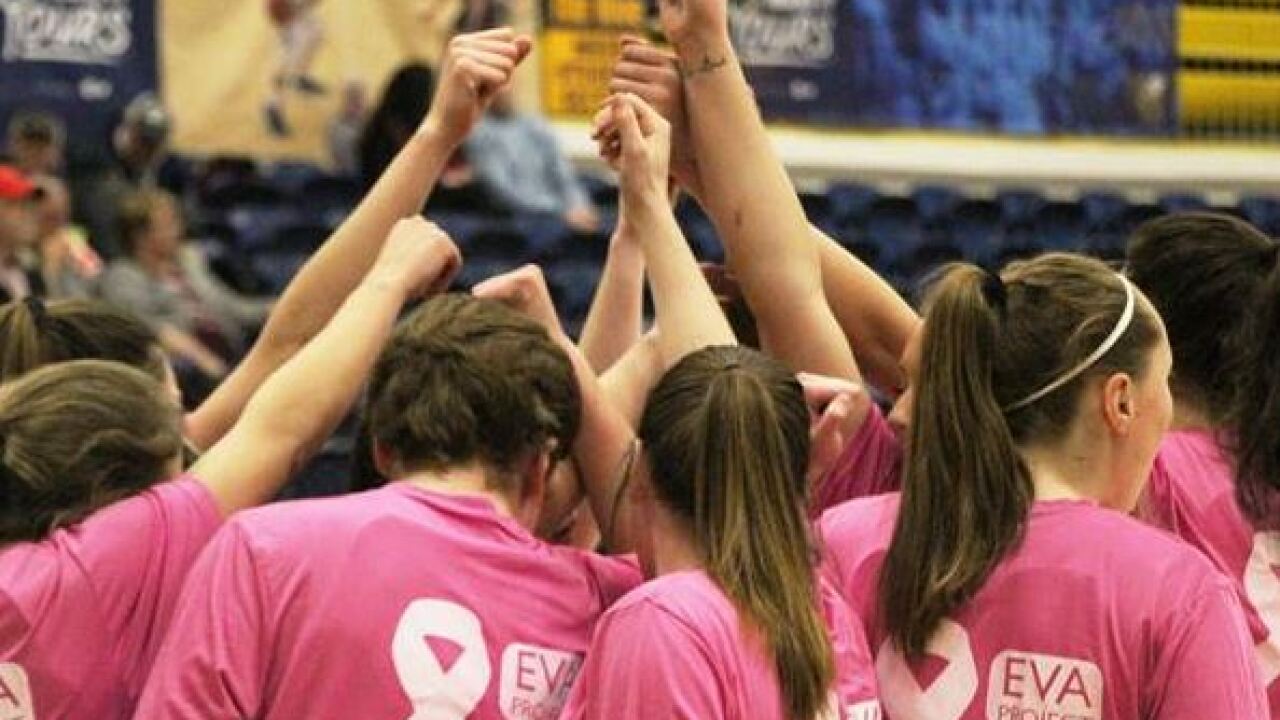 BILLINGS – Montana State University Billings women’s basketball is once again teaming up with St. Vincent Healthcare Foundation Eva Project in raising breast cancer awareness Thursday at 7 p.m. when they host No. 8 University of Alaska Anchorage at Alterowitz Gymnasium. All St. Vincent Healthcare associates (including family) as well as anyone wearing pink for the cause will receive free admission to the game.

The Yellowjackets (12-11, 7-7 GNAC) made a statement last week by defeating Western Oregon University and Concordia University at home and are mounting a run toward the post-season with six regular season games left on the calendar. Saturday, the ‘Jackets host University of Alaska Fairbanks at 5:15 p.m. to close out their four-game homestand. Both games this week are part of men’s and women’s doubleheaders and will feature live statistics and video via MSUB’s Stretch Internet Portal for those unable to make it to the arena.

Riding the momentum of their first weekend sweep of the season, the Yellowjackets are alone in sixth place in the Great Northwest Athletic Conference, looking to catch a Central Washington (8-6) squad, which split against both Alaska conference rivals last week. MSUB is 9-2 overall at home this winter.

“We’ve been able to make shots at a higher rate at home this season and play some good team basketball in front of our home fans,” said MSUB head coach Kevin Woodin. “As we head down the stretch, hopefully we can continue to execute and play well.”

SHELLEY SHINES: Sophomore Taryn Shelley had a dominant week for the ‘Jackets. The forward recorded back-to-back double-doubles in wins over CU and WOU. Thursday, Shelley played 33 minutes and shot 11-for-21 with 23 points, 14 rebounds, three assists, and two steals. Saturday, she notched 13 points and 14 rebounds and shot 6-for-9 from the field. Shelley continues to show improvement in her second season at MSUB and is up to ninth in scoring in the conference at 13.2 points per game. Defensively, only Bria Thames (Saint Martin’s) and Claire Dingus (Saint Martin’s) average more rebounds per game than Shelley at 8.4 rpg.

“I’m confident Taryn will play well again this week,” Woodin said. “She’s been able to establish a consistent high level of play over the past few weeks. Her focus and determination from within has been great to see. She has a lot of tools and talent on both ends of the floor, but I think the biggest difference has been her sharp mental focus. I think what she is capable of doing out there is limitless.”

SUPPORTING CAST: The rest of the Yellowjackets supported Shelley admirably last week and six players made it to double-figures in a 74-50 victory over Concordia. Point guard Hannah Collins showed no signs of lingering injury last week and marked 13 points, five assists, and six rebounds against the Cavaliers. Jeanann Lemelin, who broke out for 30 points two weeks ago against Saint Martin’s, continued her streak of consistent play with 32 points in two games. Lemelin ranks third on the team with 11.0 points per game and stands fifth in rebounding (3.1 rpg). Lemelin also has 42 steals, which ranks sixth best in the GNAC and first on the Yellowjackets. Senior Taylor Cunningham and freshman Shayla Montague have also been instrumental in the team’s success this year.

“When we get balance in scoring from different spots on the floor as well as who is scoring, it’s an added bonus,” Woodin said. “We showed we have the ability to score from inside the paint as well as the 3-point line. When we can do both and also make some mid-range jump shots, we are reading the defense well and taking what they give us.”

Yasmeen Goo edged out Shelley for GNAC player of the week Monday and has been the catalyst to the No. 8 ranked Seawolves’ stingy defense. Goo averaged 11.5 points per game and played a key role in road wins over Northwest Nazarene and Central Washington as Alaska Anchorage pushed its current win streak to five. Goo helped hold the Nighthawks to 23 points below their scoring average Thursday night, then matched her career-high with 16 points in Saturday’s 67-59 win at CWU.

The Seawolves snuffed out the Yellowjackets 80-33 at Alaska Airlines Center on January 18 and held MSUB to it’s second lowest point total in school history. Goo scored eight points with five assists, but UAA was led on offense by Lauren Johnson, who finished with 16 points and three rebounds. Safiyyah Yasin leads the team with 13.2 points per game (eighth) 2.4 steals per contest (second). The Seawolves rank second in scoring (74.8 ppg) and first in team defense (53.6 points against) in the league.

Head coach Ryan McCarthy produced a 190-34 record over his first eight seasons at the helm and the Seawolves won a pair of games in the NCAA Division II west region championships last season before they bowed out to Azusa Pacific University 65-63.

“You have to play with great purpose and intensity out there to have a chance against Anchorage,” Woodin said. “They play hard all the way through and you have to deal with defensive pressure consistently. They play a unique but effective style so you have to have an attack mentality. If they get you on your heels, then you are in trouble. Our mental approach to the game has to be positive.”

Despite two road losses last week, the Nanooks held on to the 10th position in the GNAC standings with a 2-12 record. Alaska faces Alaska Anchorage Tuesday before traveling to play MSU Billings on Saturday. UAF last won on February 1 against Saint Martin’s University 82-73.

Jocelyn Gandara continues to lead the GNAC with 18.9 points per game. Gandara also leads the team in rebounds with 6.9 rpg and a total of 158 on the season. Zosha Krupa leads the defensive effort with 23 steals, two blocks, and 33 fouls this season. Sam Tolliver has 20 starts and 46 made 3-pointers. She averages 14.3 points per game along with 2.9 rebounds.

The Yellowjackets bested the Nanooks 70-68 in Fairbanks on January 16 behind a 27 point, seven-rebound performance by Shelley. Taylor Cunningham stunned the home crowd by draining the game winning 3-point shot with 1.6 seconds left to play. Jeanann Lemelin also scored 11 points.

“Alaska Fairbanks is much improved from a year ago,” said Woodin. “They have some outstanding perimeter players. We were able to come back and win against them last time but I think they are a very dangerous opponent. They play fast and attack the basket so we’ll have to play good full court defense, especially early in the game in order to come out ahead.”

IF YOU ARE GOING: The Yellowjackets encourage all fans to wear pink to the game for free admission Thursday night.
“It’s a great annual event that we have done for a number of years,” Woodin commented on Pink Night. “We have a great partnership with St. Vincent Healthcare to promote breast cancer awareness in our community. It has been something that our team looks forward to each year. It creates a chance for our players to meet the survivors in the week leading up to the game as well. Hearing their stories makes a real impact and I am always energized by the strength and courage they possess.”