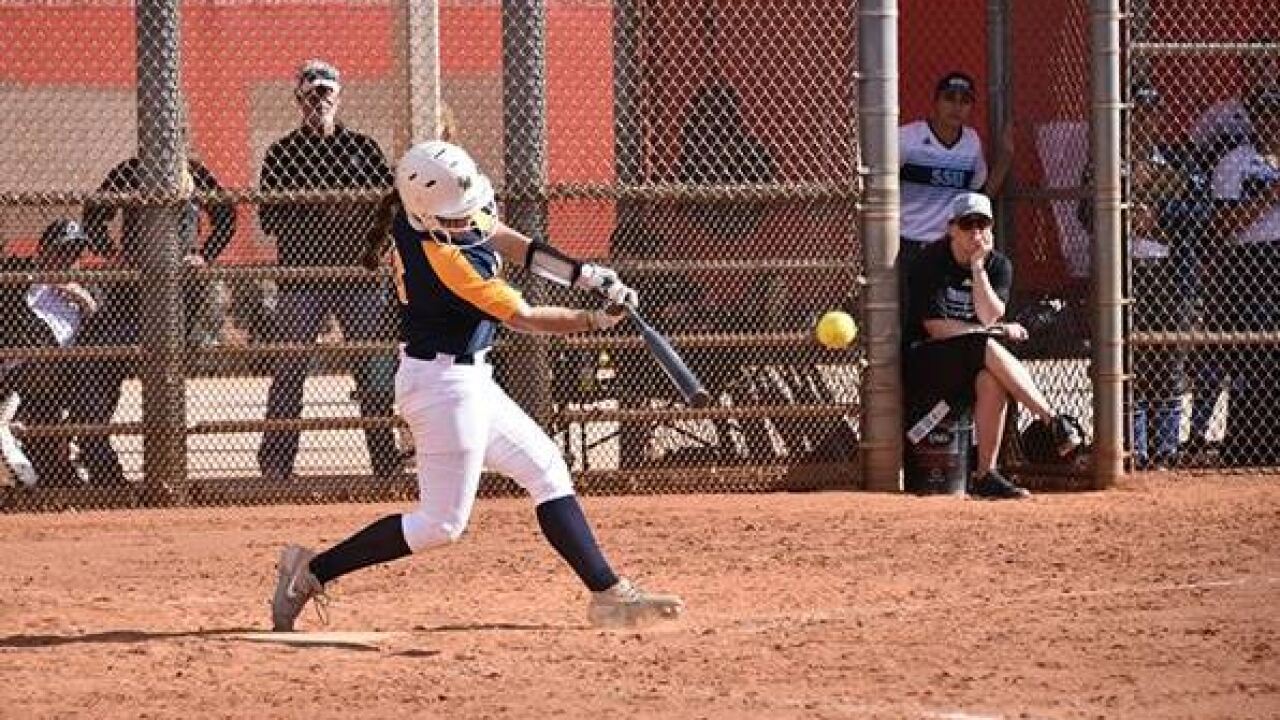 MSUB did not get through their entre line-up until the third inning as only four players in each of the first two received at bats. Julia Qualteri started on the mound for MSUB and gave up one run to the Argonauts in the first inning, but settled in to retire the next nine consecutive NDNU batters.

In doing so, she allowed time for MSUB hitters to begin to see the ball better and MSUB tied the game at 1-1 off of Payton Reynolds RBI single that scored Britzy Hockett with the bases loaded.

Billings’ own Sydney Norwood would give MSUB the lead 2-1 with a solo home run over center field. It is the first career homerun for the former Billings Senior Bronc.

With Qualteri in command, the MSUB bats came alive in the sixth inning. MSUB would knock in five total runs to essentially put the game away. Norwood laid down a sacrifice bunt to advance runners to second and third base. With runners in scoring position a wild pitch from NDNU allowed Hailee Gregerson to score from third for the 3-1 lead.

Sidney Pollard had drawn a walk the at-bat before Norwood and crossed home plate with the help of an error from the Argonaut second basemen to extend the ‘Jacket lead 4-1.

With runners at second and third, the table was set for Allie Hughes to put the game away. Hughes hit her first homerun of the year over center field for three RIBs and a 7-1 lead.

Notre Dame would add one more run in the seventh, as would MSUB. Pollard hit a single through the left side to score Taylor Anderson from third base. Anderson had reached on a single two batters earlier and MSUB would go on to win 8-4.

PLAYER OF THE GAME: Julia Qualteri was named the St. Vincent Healthcare Player of the Game. Qualteri pitched a complete game improving her record to 2-1. Over seven innings, she allowed four runs five hits and had one strikeout.

Behind another complete game from the Yellowjacket pitching staff, MSUB came out with their best start of the year. Maddy Lincoln pitched a complete game and got her first win of the year (1-0). The senior lefty pitched 5.0 innings allowing five hits, two runs and one strikeout.

MSUB scored four runs in the first inning. Morgan Quimby kicked things off for MSUB with a single through the left side. Hughes followed with a double to left center and Reynolds pushed across the first run with an RBI line out to right field for a 1-0 lead.

Brittanee Fisher stepped to the plate and promptly singled down the left field line scoring Hughes from third to make it 2-0. Freshmen Marin Penney hit an RBI double to right center scoring Fisher for the 3-0 advantage. Skyler Jenkins capped off the inning with a single up the middle allowing Penney to score from second and put the ‘Jackets ahead 4-0.

The Mustangs would cut the lead in half scoring two runs in the top of the third inning. MSUB would add one run in the third as Reynolds went yard for her second homerun of the season making it 5-2 after three.

MSUB would make it 6-2 in the fourth on a Georgiabelle Benning single to the short stop scoring Jenkins. The ‘Jackets would need just one more inning of work to claim victory and they did it by adding four more runs in the bottom of the fifth.

Reynolds singled to center field and Kylee Stoll was inserted as a pinch runner. Fisher doubled down the right field line allowing Stoll to make it to third base. A wild pitch with Penney at the plate allowed Stoll to score and put MSUB up 7-2.

Continuing her hot start to her career, Penney proceeded to hit her team leading third homerun of the year pushing across two runs for the 9-2 lead. Now the Yellowjackets needed just one run too send everyone home early.

With a full count, Jenkins would do just that as she hit her first home run of the year. A solo shot over the right field fence made it 10-2 and gave MSUB the win with the run rule.

With two wins today, MSUB improves to 5-3 in the first six days of their season.

PLAYER OF THE GAME: Maddy Lincoln (1-0) was named the St. Vincent Healthcare Player of the Game. Lincoln pitched a complete game allowing just five hits in five innings, two runs and had one strikeout.